Saw this the other day. So I took this picture. There was another nearly identical wet patch 2 spaces away. 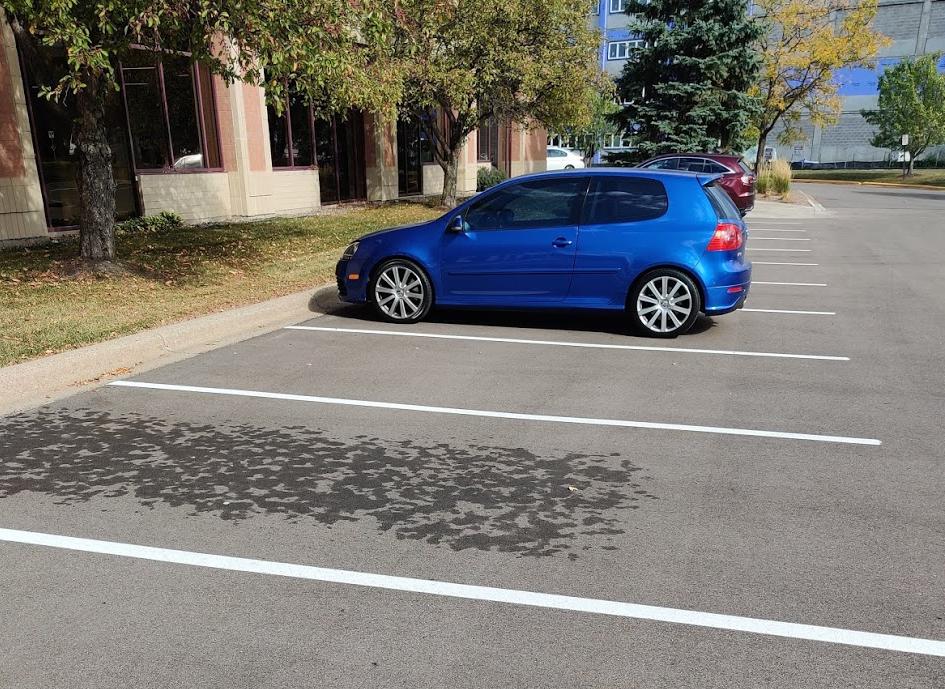 Note: This is a straight forward physics puzzle. This is a ordinary parking lot with ordinary / usual interactions.

Note: Matthew Jensen's answer was quite reasonable, however, in this case, no car was present in that parking spot during or after the rain.

@MatthewJensen has provided a very reasonable possible explanation. The OP has however indicated that the car left the parking spot before the rain. This prompts the consideration of an alternative mechanism:

A car has been parked there for some time in the hot sun. The surrounding asphalt in direct sunlight has heated up, while the asphalt beneath the car has remained relatively cool. The car has then left the parking spot, and there has subsequently been a small drizzle. This has evaporated quickly from the surrounding hot asphalt, but is in the process of evaporating more slowly from the cold asphalt where the car was located, and some water still remains there.

In fact, if we constrain ourselves to inside-the-box thinking in a car-in-the-rain situation and approach this as a physics problem, these two timelines (or some combination of them) seem to be the only ones possible:

The true answer thus could be a combination of these two mechanisms (there may be multiple drizzles and multiple cars), and these seem to be the only two physical explanations with the assumptions we have detailed. Of course, this does not exclude unusual lawn sprinklers or sneaky OPs with watering cans...

Without such tight constraints on possible solutions, the open-ended explanations for a rectangular wet area on asphalt are essentially infinite. These include:

After a period of rain, a magic carpet was parked above the asphalt, and this area was in its shadow.

There is currently a square cloud above the parking lot, and this is its shadow.

A long wide roll of wet carpet was left on the pavement.

An inflatable pool was sitting in the parking lot.

The two square wet spots were the footprints of an enormous square-footed robot that just walked through the lake.

Although these ideas perhaps highlight the problems with open-ended real-world puzzles like this, I admit that the rain-fell-on-the-cold-asphalt-where-a-car-had-been explanation seems the most likely to me

I believe it's because

It rained. While still raining, a car parked there. While the car was still there, the rain cleared up and the sun came out. Then the car left.
The sun could not dry the rain under the car.

The OP, John, wanted to give us a puzzle. He went out on a dry day with a watering can and deliberately wet the area to provide the above photograph.

It is an unusually humid day, and an unusually cold car parked here for a time before driving away; the pattern resulted from an unusually high volume of condensation forming on the undercarriage and falling/splashing onto the pavement.

two street cleaning vehicles parked there after they did their job. Since they are wider than a "normal" car, they needed to park two spaces apart from each other.

The wet patches resulted from the excess water dripping down from the underside. That is why the pattern looks so "spotted". There are no wet tracks though, because the sun dryed them up already.

I think this is because

it's a parking for a carwash. The other cars look perfectly clean as well. After the owner payed inside he/she drives off, but the tires are already dry from driving to the parking spot. Standing still causes the car to drip water that remains after the car has left.

Someone parked a couple of airboat trailers there shortly after taking them out of the water so they were still soaking wet. (Unlike most boats, these have roughly the same footprint as a car, so that matches up). Before the picture was taken, the (now dry) airboat owners hooked the trailers back up and drove off with them.

tl;dr - Car with a wet undercarriage dripped onto the pavement.

A car drove through a wet area (broken water main, hydrant, the aforementioned street cleaners, etc., or of course rain) to the point where the undercarriage was sufficiently wet, but then entered a drier area (thus water from non-rain sources being more likely, as this would have had to be a fairly short distance after the water). It drove on the drier area and the pictured parking lot for the tires and wheel wells to be fairly dry, but the undercarriage to still be wet. It parked and remained there for long enough that the water on the undercarriage dripped down a lot, and then left the parking lot. The much less wet tire tracks dried before the OP took the picture.

If this was posted in Britain, it would be a trick question: Pavement implies paving stones, and the only paved zone there is the drainage, which collects the rain. Roads haven't been paved since roman times? Sidewalks are often made of pavement. Roads are made of tarmac :) The cars appear to be European, which is confusing, because Europeans use the logical etymology, i.e. pavé is a slab. There are no slabs/pavements visible in the photo other than the curb.

If here was no car before or after the rain, and there was rain and it's not dew, I'd suggest that a car was parked there for a long time which allowed a lot of dust and organic residue to gather under it while the other zones were scoured by rain. The dust has stayed for a few weeks, enough so that it makes a difference in water or dew retention on cold mornings or when it rains.

There are water sprinklers on the lawn that spray water towards the car park. All car spaces contained cars, except those two car spaces. Naturally those two spaces got wet and now have a wet patch. The water has not dried out yet.

There was a car and a sprinkler sprayed the car.

There was a tent

Someone knew that there would be a person that would take a picture of this so he put a giant marble block and dumped water over it, let it evaporate, then left no trace of manipulation

Not the answer you're looking for? Browse other questions tagged visual real physics or ask your own question.

5
Explain this pattern of water spots in a parking space

50
Find the treasure before Dargloc does
24
Separate the milk!
10
Where does the emperor sit and why the earplugs?
19
The falling broom handle
3
Why are the tires flat on one side?
5
Explain this pattern of water spots in a parking space
7
Why did the number of islands change?
26
PSE Advent Calendar 2021 (Day 16): Poké(snow)ball battle!