As the reaction to my previous physics puzzle was somewhat mixed, I'll try again. I found this in an online physics book.

You hold a broom as shown in the following picture:

The head of the broom is resting on the ground, and you are holding the handle end a couple of feet off the ground. You are also holding a bunch of keys at the same height as the tip of the broom handle.

My instinct is that:

This is based on:

If the broom's angle to the ground is less than 47.9°, it will hit the ground first. Otherwise, the key will.

This assumes that the end of the broom on the ground doesn't slide, making it act like a hinge, and also that the broom handle is a uniform rod. The puzzle doesn't specify the properties of the broom, but I think these are a reasonable interpretation for a physical model.

Below are plots of the height, velocity, and acceleration of the top end of the broom and the key for when the broom starts at 47.9°. They hit the ground at the same time. Note that the broom falls slower at first but catches up at the end to tie. If it had started lower, it would win, and if it started higher, it would lose. 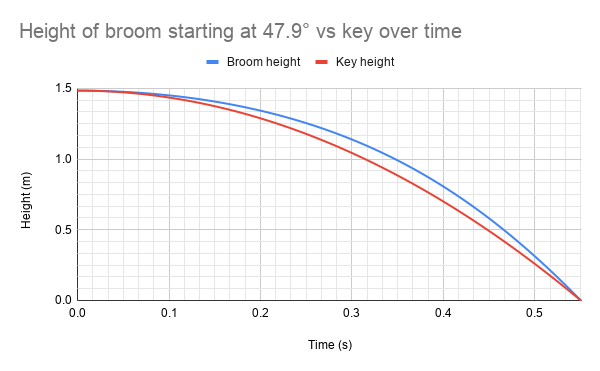 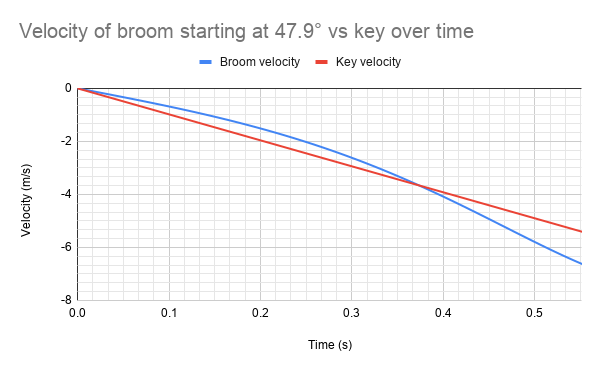 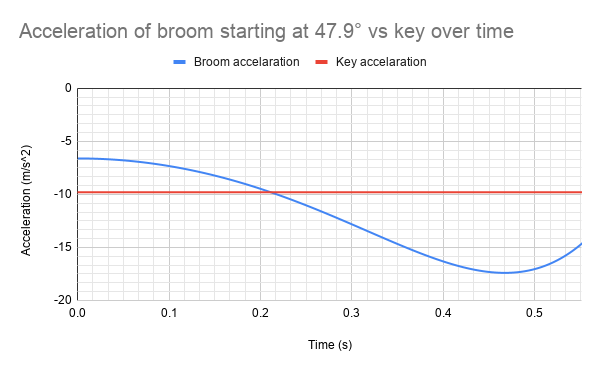 I got these plots and estimated the cutoff angle 47.9° by numerically solving the following differential equation in the angle $\theta$, where $\ddot{\theta}$ represents its second derivative in time, e.g. the angular acceleration: $$ \ddot{\theta} = - \frac{3 g}{2 L}\cos \theta$$ Here, $g$ is the gravitational acceleration ($9.8 \thinspace m/s^2$) and $L$ is the length of the broom (I used 2 meters). Their values don't really matter, they just change the constant in $ \ddot{\theta} = - c \cos \theta$, which only affects the time scale.

This formula, also derived on this site, comes from considering the torque $\tau$ on the broom around its pivot on the ground via the gravitational force $mg$ acting on its center. This center is $\frac{L}{2} \cos \theta$ horizontal distance away, so $$\tau = \frac{mg L}{2} \cos \theta.$$ Then, we use that torque causes angular acceleration as $\tau = - I \ddot{\theta}$, where the moment of inertia for a uniform rod around it end is $ I = \frac{1}{3} M L^2$. This gives the formula above relating $\ddot{\theta}$ to $\cos \theta$. Since it's more intuitive to think about and plot height rather than angle, and we want to compare to the key, we relate the height $h$ of the top of the broom as $h = L \sin \theta$.

The site then solves for the angle $\theta$ where the initial downward acceleration $\ddot{h}$ matches the key's acceleration $-g$ due to gravity. This gives $\theta = 35.3^{\circ}$. But, this isn't the angle that makes them reach the ground at $h=0$ at the same time. The broom will accelerate faster during the smaller angles it passes through on its journey, so it will arrive first. Rather, we need to determine its whole trajectory $\theta(t)$ to find when it reaches zero.

I doubt that such a second-order differential equation with $cos$ has an analytic solution, so I simulated it numerically. I used a time step of $0.2$ milliseconds, which I think is accurate enough. I compared it with a key starting from the corresponding initial height simulated the same way but under constant downward acceleration from gravity.

I searched for the initial angle $\theta(0)$ where the broom and key reach zero on the same simulation step, and found 47.9°. This might be a tiny bit off due to the discreteness of the simulation, but it should be very close.

Suppose the broom is very nearly upright (vertical) and the keys are level with its top.
It can be seen that the broom handle has to move sideways.
Even if the acceleration of the broom tip (sideways) were the same as the keys, it has a longer path to travel - nearly $\pi / 2 = 1.57$ times the distance travelled by the keys.
But to make it worse, the broom's acceleration is initially very small.

Now suppose the broom is very nearly flat (horizontal) and the keys are again level with its top.
This time, they will take almost the same time to fall, as both their acceleration, and distance to travel, are almost the same.
But the broom will still take longer. Because of the slight angle, it has to move a teensy bit sideways, and still travels in an arc and not in a straight line.

The only arrangement when they take the same time, will be when they are both already touching the floor! At all other times, the keys will arrive first.

Assuming the end of the broom doesn't slide along the floor and neglecting air friction, I believe that:

I equated the kinematic equations for the distance to fall and equated the time until impact. Combined the equations and solved for the angle of the broom. The exact angle calculation is too complex for Puzzling, but the question was good and thought provoking.

So long as the starting angle is close to that shown, the broom end hits the ground first. The question isn't ill-defined so much as requiring a bit of understanding about real-world broom handle lengths and how being a couple of feet off the ground to start with will make that initial angle much less than 47 degrees.

Reason: The easiest way to think of it is that the centre of mass of the broom (roughly its middle) drops at "close enough to"* the same rate as the keys, but the middle is starting off at half the height of the keys, so the broom has an advantage. The end that started at 2ft off the ground will fall at roughly twice the rate of the middle.

*But against that advantage is the component of the force on the head of the broom (that touches the ground) that opposes the force of gravity to some extent - if the broom was perfectly vertical it would entirely cancel the gravitational force... if the broom were horizontal the force would only be rotating the broom; for angles encountered in this question the acceleration of the middle of broom is close enough to that of the keys for the double-rate advantage to let it win the race.

For the moment, consider just the broom handle and the level at which it becomes horizontal: 1 - the tip of the handle and it's midpoint reach there at the same moment: the tip has travelled twice as far but at twice the speed. 2 - the keys must reach that level first.
The only force on the keys is it's weight and it's acceleration is g. On the broom, gravity pulls down, but the ground pushes up on the lower end. So the net force on the handle is less than it's weight and the acceleration of it's CoG must be less than g. The keys beat the CoG and hence the tip. 3 - At that point the keys are travelling faster than the handle CoG and are ahead of it.

For the extra distance required by the thickness of the head, it may be possible for the handle tip to catch up, as it is travelling aout twice as fast as the CoG when it passes horizontal. But if the handle started well above the horizontal, it's CoG is travelling much slower than the keys at this horizontal position, because it's acceleration has always been much less than g. I haven't done the analysis, but I suspect it requires a large broomhead and starting the handle nearly horizontal, if it is to be possible at all.

Not the answer you're looking for? Browse other questions tagged real physics or ask your own question.

15
A pencil in a beaker of water

4
Find the magnet among the two rods
19
A semi truck weighing exactly 10,000 pounds
66
Unsolved Mysteries: Kryptos
5
The Random Rube Goldberg Messup
0
The driver and the chickens
3
Figure out the ? in the figure below
26
The master programmer and the mystical reversal
24
Separate the milk!
21
Why is the pavement wet?