Puzzles that involve nonograms (also known as *Hanjie* or *Japanese Puzzle*), logic puzzles where runs of colored cells are given at the edges of the grid. Use with [grid-deduction] and [logical-deduction]

Nonograms are picture logic puzzles that use a grid with numbers, generally along the top and left side, indicating how many cells are coloured in in that specific row/column. If there are multiple groupings of coloured sections in a particular row or column there must be separate numbers to represent the amount of coloured spaces in each group. They can be solved using logic to eventually show an image in the grid. It is also possible to have nonograms with multiple colours. 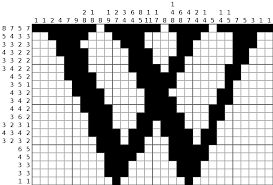