Logic grid puzzles, first produced by Lewis Carroll, are puzzles in which correspondences must be drawn between multiple ways of describing the same list of objects, using a given set of clues about these correspondences. Such puzzles can be solved using a grid, but for pre-existing grids whose elements must be filled using logic, use the [grid-deduction] tag instead.

Another form of logic puzzle, popular among puzzle enthusiasts and available in magazines dedicated to the subject, is a format in which the set-up to a scenario is given, as well as the object (for example, determine who brought what dog to a dog show, and what breed each dog was), certain clues are given ("neither Misty nor Rex is the German Shepherd"), and then the reader fills out a matrix with the clues and attempts to deduce the solution. These are often referred to as "logic grid" puzzles. 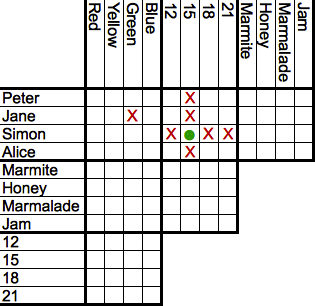 Indicators are used both to denote what is possible as well as what is not possible. In this diagram, we can see that Simon must be 15, but Jane cannot be green (in the context of the puzzle, this probably makes sense).

These puzzles were first created by Charles Lutwidge Dodgson (Lewis Carroll) in The Game of Logic. They are often wrongly attributed to Albert Einstein.

Not to be confused with grid-deduction, for puzzles such as Sudoku or Kakuro in which a pre-existing grid must be filled using provided clues about its elements.

Which lorry is carrying drugs?