Another Sudoku monstrosity from the brains of Yours Truly. No rules are given, part of the challenge is trying to work out what the rules are :) 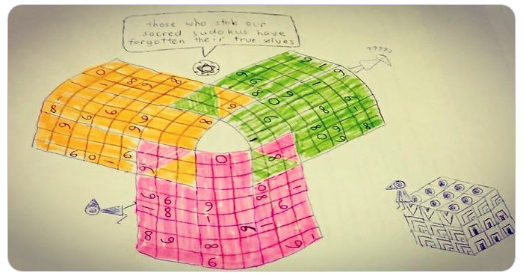 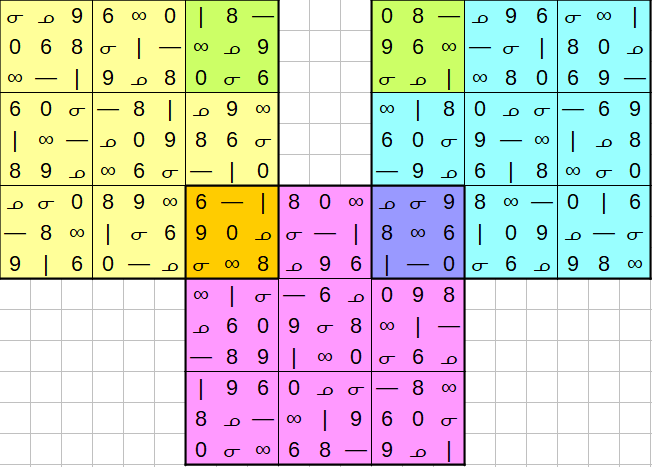 The first thing to notice is:

The symbols used cannot all represent digits directly, since several rows have multiple 1's or 8's. However, leveraging the Monument Valley theme of the puzzle, we realize that orientation matters, and that in fact the symbols forming the Sudoku are
0 | — 8 ∞ 9 6 ᓂ ᓄ
Moreover, where the yellow-pink and yellow-green junctions are, the orientation is the same for both connecting sudokus. However in the yellow-green junction, the characters will be rotated...but our character set is invariant under 90 degree rotations, so we'll be OK.

To represent the solution:

I've first turned the green grid blue because I like primary colors. Then I physically split the yellow and blue grids to make the diagram lie flat. The upper right square of the yellow grid and the upper left square of the blue grid are both shown...we just need to make sure that the blue square is the yellow square rotated clockwise by 90 degrees, both the cells in the square and the symbols in the cells. 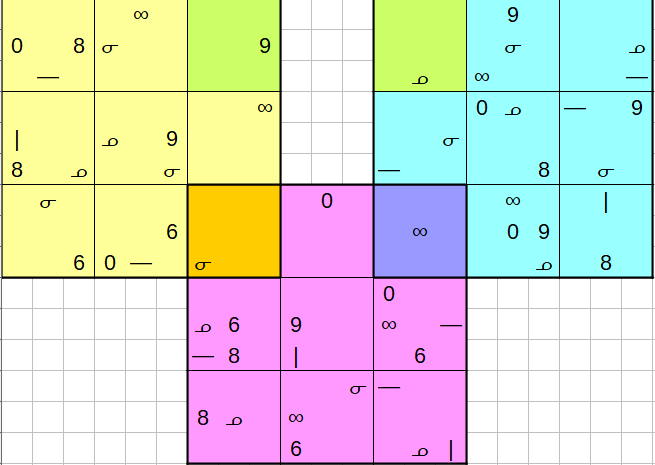 There are a number of easy fill-ins one can get by identifying rows, squares or columns where there is only one possible place for a symbol to go. Utilizing the initial conditions and adding these fill-ins gives the grid, with just a couple requiring logic beyond simple reduction of possibilities based on observation. The first comes in filling pink grid, bottom-center square, upper-left cell, where we note that in the middle pink square, the 0 must be in the right-most column, forcing the 0 in the bottom-middle square to be in the left-most column. The second comes in filling yellow grid, bottom-left square, upper-right cell. Here we note first that the 0 in the upper-right square of the pink grid must be in the bottom row, which forces the 0 in the upper-left pink square, which is also the lower-right yellow square, to be in the middle row. At this point, the grid looks as follows: 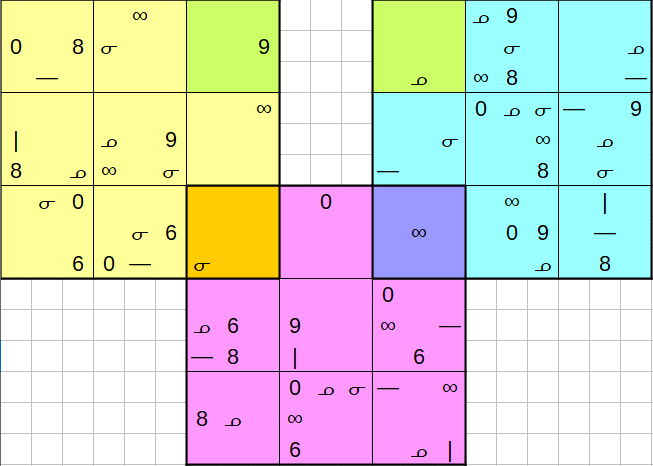 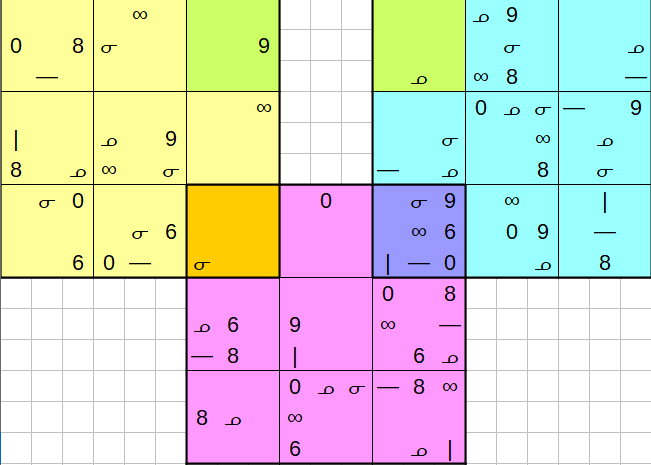 About half the pink grid fills in by inspection. After completing the right-middle and lower-right squares, observe that the 9 and the | in the lower-middle square must occupy the remaining two cells in its middle row. Thus the right-middle cell of the pink lower-left square must be —. Numerous other simple fill-ins ensue in the pink grid, and also in the blue. This leaves us in the following state: 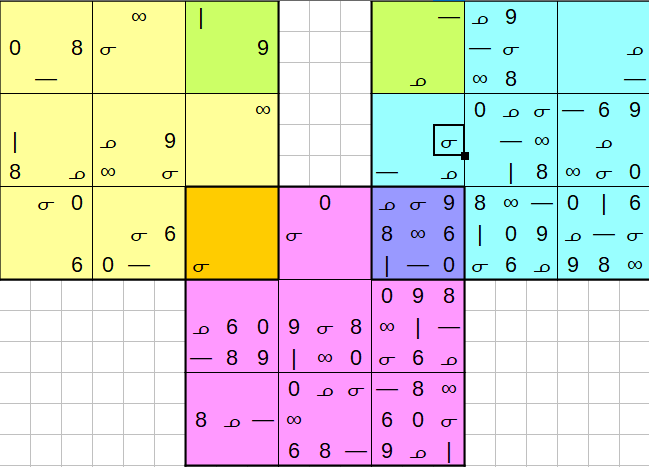 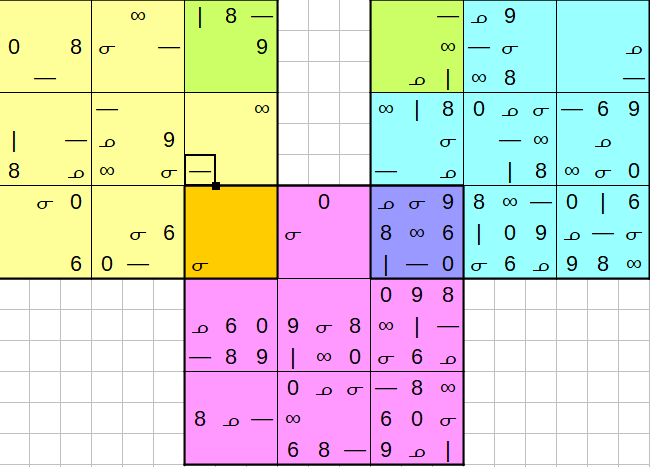 Look at the middle column of the upper-left square of the blue grid, where there are two open cells. These cells cannot be 0 or a 9, since there is already a 0 and a ᓂ in the middle row of the top rank of squares in the yellow grid. Moreover these cells cannot be ᓂ as this symbol already appears in this column. Hence these two cells must contain 8 and 6, in some order. Moving down to the left-middle square of the blue grid, this forces the two empty cells in its middle column to be 0 and 9, which we can place unambiguously, and lets us finish off the left-middle and center squares of the blue grid, and some other easy fill-ins, leaving the grid: 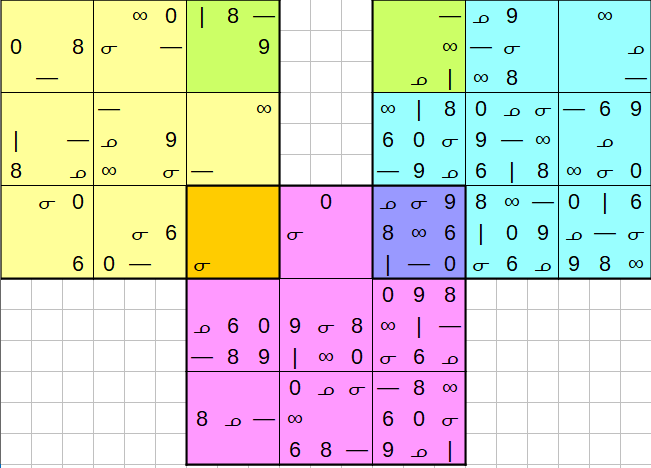 Some perspective after sleep:

Let's work in row 2 of the yellow grid. Looking in the fourth column of the yellow grid, we see that the 6 in this column must be in the left column of the upper-middle square, which means the middle cell of this square, row 2, column 5 cannot be a 6. We've already determined that the cells in this row in the upper-right square must be ∞ and ᓄ, in some order, so this forces the 6 in this row to be in the second column, and also forces a | in the fifth column in this row. With some additional fill-ins, we get: 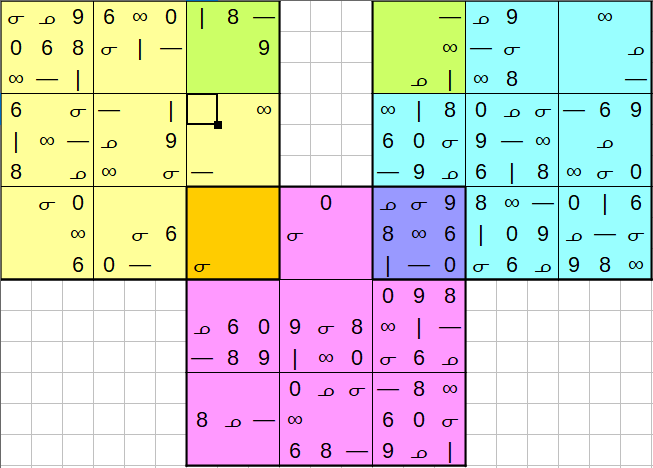 Not the answer you're looking for? Browse other questions tagged enigmatic-puzzle sudoku video-games or ask your own question.