A maze, a statue, and a riddle

John and Jeffrey had been friends for a long time. After meeting at Fort Bragg and serving in the military in the 60's, they had always remained close, even living in the same town after leaving the military. John had become a journalist. He held a passion for mysteries and puzzles and was known sneak easter eggs into his newspaper articles. Jeff, who always had an knack for art and using his hands, was a local sculptor.

Last year, the owners of a large estate commissioned an elaborate and large hedge maze for their property. They hired Jeff to sculpt a statue for its center. It wasn't to be of a specific person, but rather simply, just a gentleman with a book. It was an easy enough task for Jeff.

This year, the estate opened the property to the public and the labyrinth of a garden became a sort of town park. It had three entrances, the south side, which faced the mansion, and east and west sides which let out onto two roads entering the estate. There was no entrance on the north side, which faced the property boundary and a patch of woods.

Shortly after it opened, John received a note from Jeff saying, "I hope you get a chance to visit the Maze. I engraved a message which you'll appreciate. Enjoy the challenge." Curious, John immediately set out, and upon coming to the statue, found these four lines engraved upon the book in the statue's hands:

Though with much ease have many come to know me,
Just Finley's breeze from midnight sun shall truly see,
The Victory and Bounty in adventure great and grand,
For vital was my purpose: that unknown southern land.

Intrigued, John looked around the rest of the statue and found these letters engraved about the statue's collar:

He assumed this was the message Jeff had meant, and a few hours later had uncovered Jeff's reminiscent line. What message did Jeff write about the statue's collar? 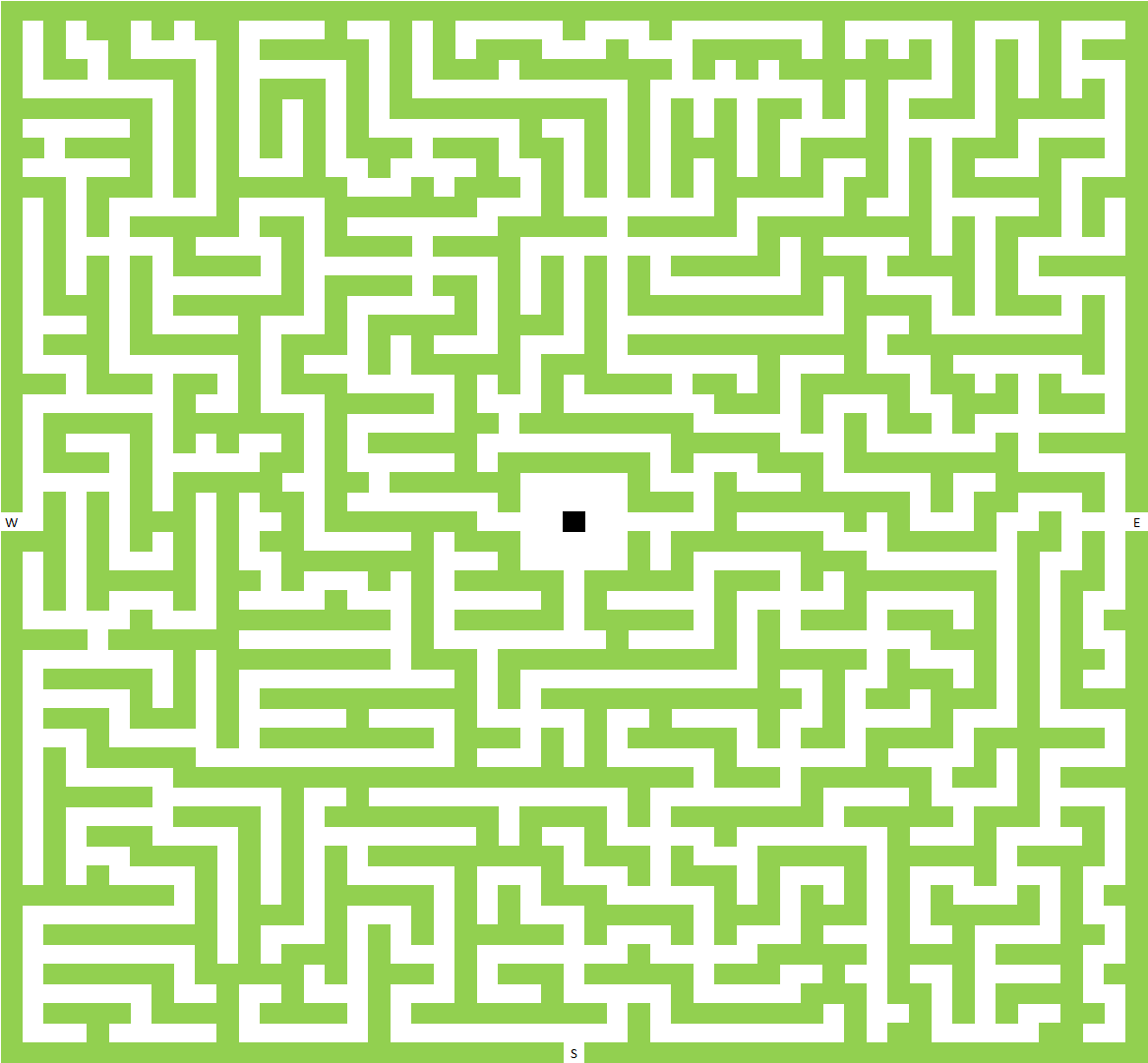 The [E]ast, [S]outh, and [W]est entrances are marked, along with the center statue, represented by a black square. Green squares represent the hedge, while white squares are open space.

@Kristinalustig has correctly identified that Morse code can be obtained from the maze's solution. The riddle does not indicate how to extract the correct Morse code "dots and dashes" from the maze, but multiple steps are not involved in this process

The Morse code (dots, dashes, and spaces) can be derived from the structure of the maze solution (from the south side). Since dots, dashes, and spaces are all communicated, the method of conveying this must have at least three options. Thus, there is something in the structure (consider the turns) of the maze solution which has three options that communicate a message.

@Ewasted correctly interpreted the Morse code as "CHARLESW"
In response: 1) "CHARLESW" does not relate to Fort Bragg, 2) only the first two lines of the riddle referred to the maze, 3) the second two lines refer to the key, and 4) "CHARLESW" refers to the cipher

The cipher used was invented by Charles W. 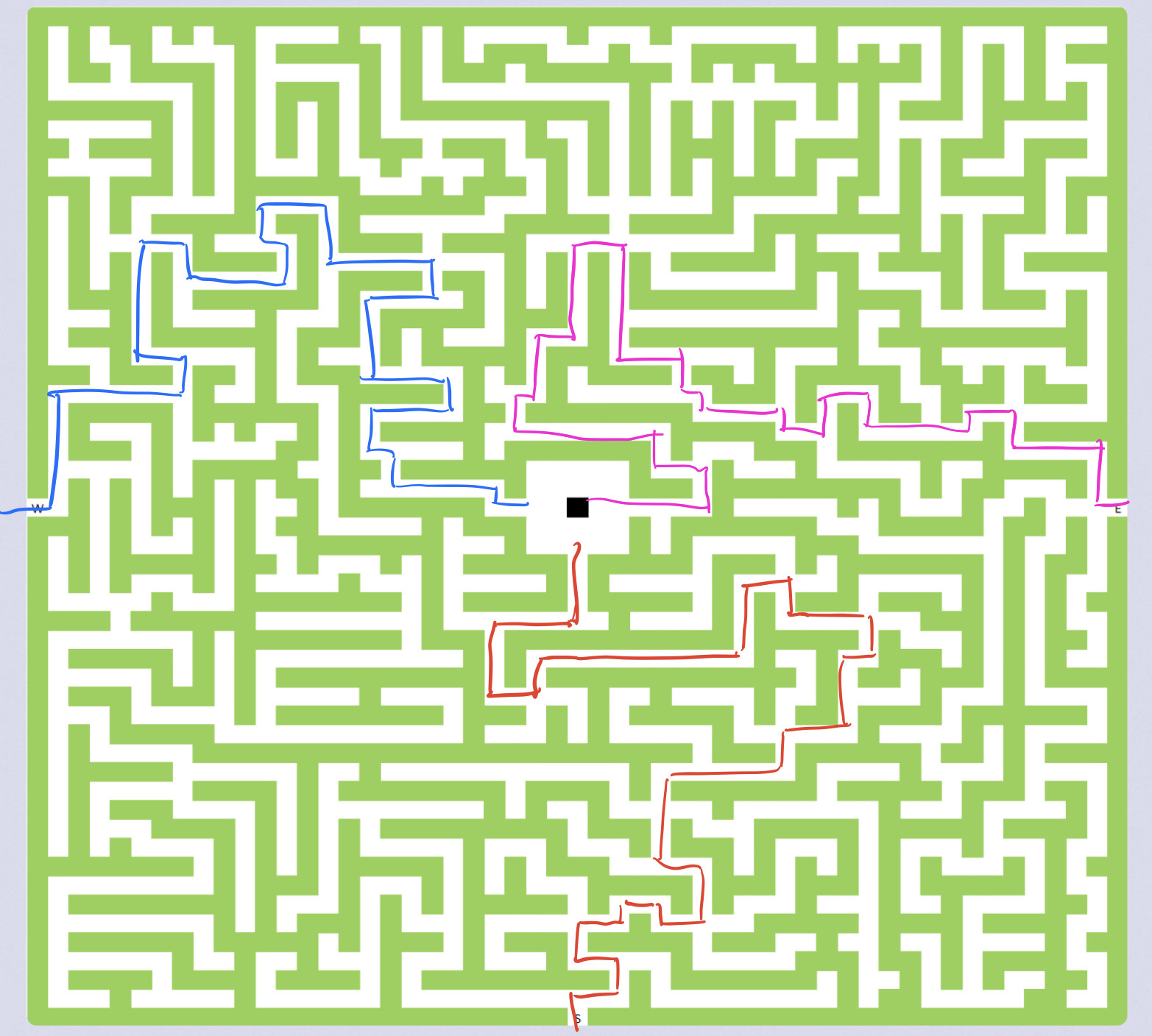 I believe the verse is telling us to get morse code out of the solution for the south passage's route. "Finley's breeze" is clueing Samuel Finley Breeze Morse, and it clearly mentions the south as well.

Where I got stuck:

I assumed that the bit about the "midnight sun" was a hint to derive morse code from the square to the north of each step in the maze, with the hedge being either dots or dashes. I also attempted using the cipher as a mask to find the letter breaks in the resulting code. Unfortunately, that didn't pan out, as the resulting morse code either resulted in gibberish or in sequences that are not a possible morse code letter or number.

@kristinalustig solved the maze and identified "Finley's breeze" as

@Ewasted translated the Morse Code to

Victory and Bounty are

HMS Victory and HMS Bounty, ships in the Royal Navy

"that unknown southern land" is

Australia which was explored by the HMS Endeavour

So to find the message

Thanks to @Kristinalustig, I knew that I should use morse code to come further. Looking at the structure of the solution of the maze, and the turns (as mentioned in hint #3), I followed the way into the maze and wrote down the number of possible turns on each turn.
Therefore I got:

Replacing 3's with spaces, 2's with dashes and 1's with dots, I got

which translates to CHARLESW.

From there I got stuck. I assumed the 'W' stood for trying the same thing with the West solution next, but it also turned into complete gibberish.

Given that the index of coincidence of 'O H R L S B D R A C G D O S' is $0.04396$, I tried decoding things with Vigenere in any combination possible, which also lead me to nothing.

I also tried looking for an author called Charles W. [something], in combination with Fort Bragg. I only found a book called
'The Story of the 82nd Airborne in the Year 1948, Ft. Bragg, North Carolina'
by the author Charles W. Mason and III Henry L. Covington, but that's about it. From here I didn't come any further.
I still don't know what is meant by 'midnight sun'.