Here is a puzzle I created today. The title is "George Orwell Sudoku"

Normal Sudoku rules apply. In every coloured group of three cells the middle digit must equal the sum of the other two digits – and remember that (yes you guessed it) two plus two equals FIVE not four 😊 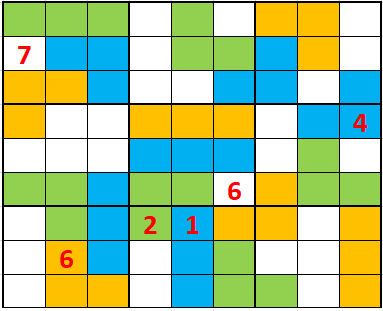 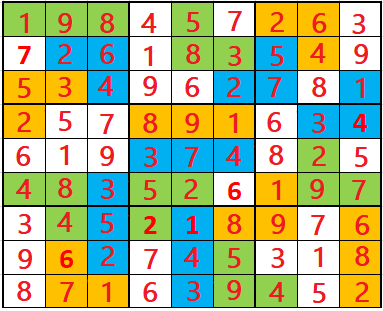 Per prompting from the OP, there is an Easter egg in the puzzle. The first four digits of the top row are 1984, referencing the title of Orwell's most famous book.

In any colored group of three squares, the sum of the entries is even, unless it is an instance of 2,2,5. Otherwise, the sum is twice the middle entry.

The first deduction we can make is in: 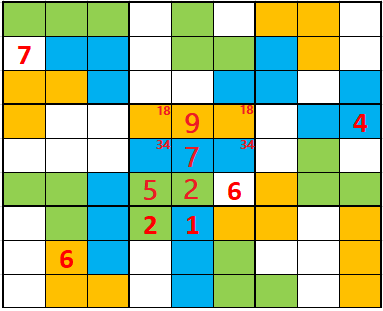 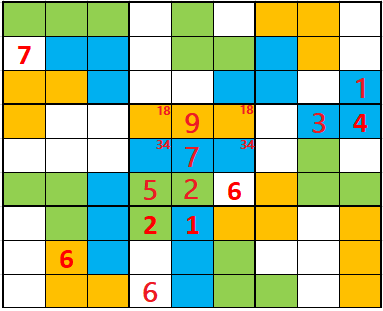 Working in row 6 from the top:

In the middle-right box, the lower-left gold square cannot be 7 or greater, for if it were it would force the upper-right gold square in the lower-middle box to be 1 or 2, which is a contradiction. Thus this box must be 1 as 2-6 are forbidden by normal Sudoku rules. Next, the lower-right square in the middle-right box must be 7, 8 or 9 by normal Sudoku rules, and cannot be 9 since it is a non-center piece of the green group. So it must be 7 or 8, implying the center of that green group is either 8 or 9, and the other end of the green group is either 1 or 2. Since there is already a 1 in this box, it must be a 2, which forces the remainder of the green group to be 7 and 9.

Continuing in this row:

The middle-left box must contain the 3, 4 and 8 of row 6 from the top. The 3 and 4 cannot both be in the green squares in this box, since it would force the bottom green square of that group to be a 1. Thus the lower-middle square in this box must be the 8, and the other two squares contain the 3 and 4 in some order. This gives: 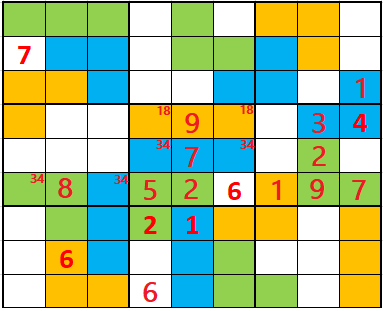 Some small deductions from here:

In the top-left box, there are two complete coloured groups, whose sum must be even, the 7, and two yellow-coloured blocks. Since the sum of all squares in the box is odd, the sum of the two yellow boxes must be even. This precludes the possibility of 2+2 = 5, and allows us to conclude that the upper-left yellow square in the middle-left box is also even. It cannot be 4 or 8 by normal Sudoku rules, so it must be 2 or 6. In the bottom-left box, the top-middle green square must be either 4 or 5 to make the sum work out. The bottom-middle square must be either 7 or 9, since it must be greater than 6 and cannot be 8. This forces the bottom-right square in this box to be either 1 or 3. This gives: 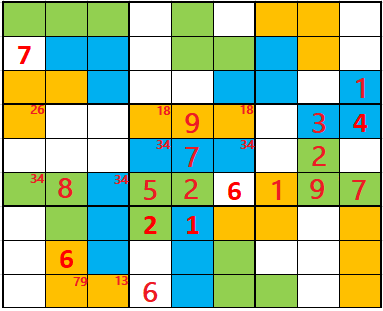 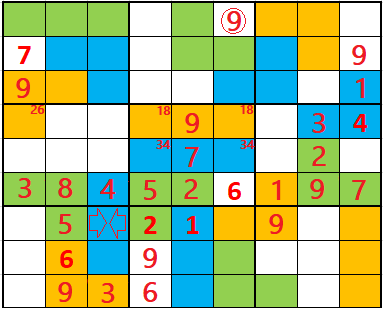 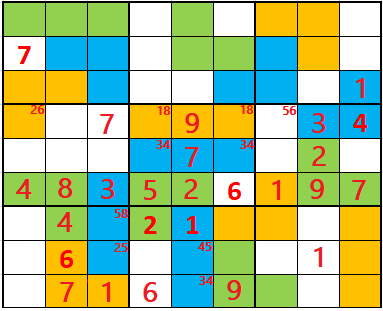 Focus in on this box, assigning some letters to particular squares, as in this image: 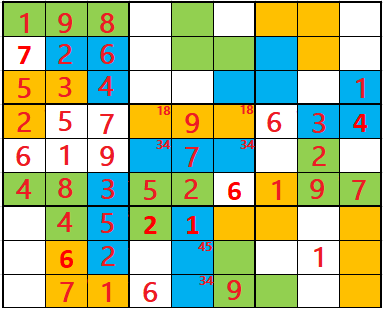 In the third row from top, the 2 must be in the 6th column from the left, since the only other candidate is column 7, and we cannot have a two as the center of a coloured group. In the same row, the 9 must be in the 4th column from the left, as again column 7 is the only other candidate, and putting 9 there would force a repeated 7 in the second row. This allows us to place a 9 in the right-middle square of the upper-right box as well, since 9 cannot be in a non-central square of a coloured group. Back in the third row, we now can put a 7 in the seventh column (and the corresponding 5 above it), since there is already a 6 in the column, and putting an 8 there would create another 6 in that column (square above). The grid at this stage is: 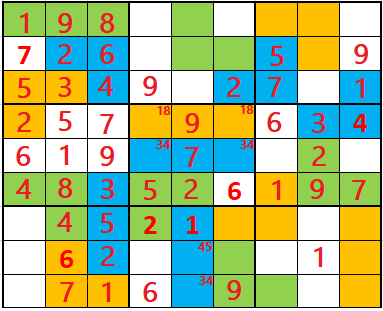 Working the second row from top:

Not the answer you're looking for? Browse other questions tagged mathematics sudoku humor or ask your own question.