My brother created this puzzle, and he wanted me to post this here. 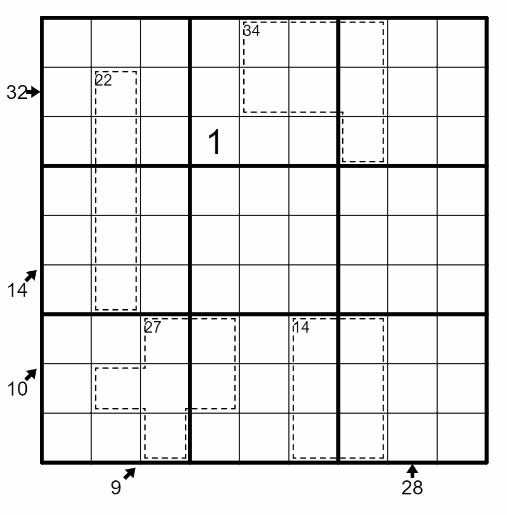 Each 3x3 box contains three mines (those squares also have numbers in them). There are no mines in boxes containing a 1, 2, or 3. Instead, there are 1, 2, or 3 adjacent mines (respectively) in the same box.

Each of the dotted lines is a slightly modified Killer Sudoku Box. The number in the Killer Sudoku box is equal to the sum of the numbers on mines in that box. For example, a box which contains 2, *4, 5, 7, and *8 would be labelled 12. Each box has the additional property that no number appears twice in that box.

The numbers outside the grid are the same way - they represent the sum of the numbers on mines in that row, diagonal, or column. It should be noted that on a diagonal, numbers can repeat.

Finally, the puzzle should be solved as a normal sudoku. Each row, column, and box should contain each of the numbers 1-9 once.

Here is the solution

Each digit in a sudoku must be one of four classes: <063> <144> <225> <306> where < A B C > represents the number of centre/edge/corner cells in a 3x3 box. The digit 1 can never appear in a centre box otherwise the minesweeper condition immediately fails. Therefore digit 1 must be class <063>. Any digit 3 appearing in a corner cell immediately forces a 1 in the opposite corner. Therefore digit 3 must also be class <063> otherwise digit 1 will be the wrong class. For the same reason, any digit 1 in a corner cell immediately forces a 3 in the opposite corner. Hence 1’s and 3’s in corner cells are “equivalent”. For reasons of space I will only outline the remainder of the solution – besides, anyone who can work out the first step should be capable of working out the details. The next step is to experiment with possible configurations of happy stars within a 3x3 box. There are only three valid configurations (ignoring rotation or reflection). The happy stars uniquely determine the location of 1 and 3 but unfortunately there are multiple options for the 2. The centre of each box will always contain a happy star. With some logic we can place the majority of the 1's 3’s and happy stars. Now the cage and diagonal clues come into play and we can start placing numbers 4 or higher. Remember that digits can repeat on a diagonal. The rest of the solve should be pretty straightforward. This took me longer than it should have, and I eventually realised that non-happy-star digits cannot repeat in a cage. It turns out this is enough to force a unique solution. This is a fantastic puzzle, easily harder than anything I have seen on Cracking The Cryptic. Well done to the setter!

Of particular interest in this puzzle:

Step-by-step deductions - Start with the Killer Sudoku box summing to $34$.

It can contain at most five mine cells (three from the top-middle box, two from the top-right box), but less than five can't sum to $34$, so it must be exactly five. Therefore all the mines of the top-middle box must be in that Killer Sudoku box. Then there's only one possible position for the mine adjacent to the already-placed $1$, and the $3$ must also be in that box. Using red for mines and grey for not-mines, we have this, with the numbers inside that 2x2 square being $3$ and three of $9,8,7,6,4$ (these being the five mine cells summing to $34$).

And the Killer Sudoku box summing to $27$.

By the general observations above about what given numbers of mines can sum to, this box must contain exactly four mines, $4,7,8,9$ or $5,6,8,9$. In the bottom-left and bottom-middle boxes, that's either three (counting the centre cell) and one, or two and (both) two. Also the two cells in the $9$ diagonal can't both be mines, because if there are two mines in this diagonal they must be $4$ and $5$, which can't both appear as mines in the $27$ box.

This is still a very partial answer, but it's a very hard puzzle! Maybe someone else can continue from here, using some of my methodology and deductions, or I'll come back later to expand on this.

Brilliant puzzle, indeed. I have been in an on/off relationship since the puzzle was first shown on LogicMasters. Unfortunately, if I am not completely mistaken, the puzzle doesn't have a unique solution. At least, I have found a solution with the identical pattern of mines, 3s and 1s, the identical pattern of the "relevant" mines, i.e. those that contribute to the totals being given, and the pattern of all 4s and 9s. The main difference is the distribution of the 2s in boxes 1, 2 and 5 (the others being identical to the solution shown here), which results in corresponding changes of some 5s, 6s, 7s and 8s in boxes 1 to 7. Of course, the number clues are OK (since the relevant positions are all identical), the mine conditions are OK (the changes of the three 2s listed above are permitted) and all Sudoku rules are fulfilled as well.

First some comments on how I arrived at my solution. Placing the mines and the 3s and 1s was the major goal from the start, including the constraints imposed on those positions by the number of mines to appear in a 3x3 box, a Killer Sudoku box or one of the diagonals, and with some help from the numbers that were permitted or excluded from contributing to the given totals.

In the first clue shown above, there is a discussion of some reciprocity between the 1s and 3s in corner positions of the 3x3 boxes. While I agree with the first conclusion shown above, I do not agree with the forced positioning of 3s when a 1 is in a corner. At least, I could not see why a 3 could not be placed anywhere in the 3x3 box without being able to find at least one option, where all three mines and the 2 could be placed in line with the minesweeper rules. If I was wrong there, I made my life much more miserable than necessary!

The deduction of the positions of the mines and the 3s and 1s was done in a stepwise order (which is at least some boderline case of using bifurcations), where I tried to identify starting scenarios, which imposed the highest number of constraints on the rest of the grid, followed by trying to prove that that scenario didn't work, so that I could exclude the starting assumption. Since I got lost a number of times, I decided to assemple a list of the different steps I took, which finally included more that 30 entries until all mines, the 3s and 1s were completely set. Once that was done, two of the 2s could easily be identified, and the rest was Killer Sudoku/Sudoku.

I have just repeated those last steps and apparently, I had made an error on my way to solving the puzzle yesterday, since I didn't spot the point in time where the path would have split to lead to the two different options.

And here is my solution:

BenddaBendda
1133 bronze badges
New contributor
Bendda is a new contributor to this site. Take care in asking for clarification, commenting, and answering. Check out our Code of Conduct.
$\endgroup$
3
Add a comment  |

14
Write digits 1 to 9 in the table, each pointing to next 3x3 grid
4
Hardest sum sudoku ever! (as well as how to solve them)
8
Largest cages Killer Sudoku
15
Sum in A Sudoku
15
Tetromino Sudoku
7
Latin square puzzle
14
Sandwich Sudoku: First 12 digits of pi
19
Tic tac toe - Sudoku: A variation in which the centre box defines the layout of the other boxes
23
Sudoku.... On your keyboard?