This question is a kinda follow-up question to: Circle inside Circle

How should you shape the rope in the large circle to have the highest probability that the small circle will intersect the robe (anywhere) when randomly placed inside the large circle? 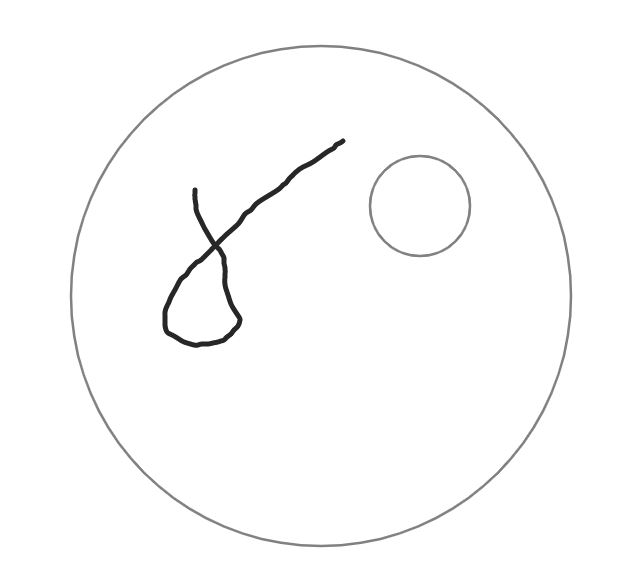 Edit: Thanks to magma for pointing out some errors in my original calculation in the comments. Hopefully this new one makes more sense.

And this can be achieved by choosing the curve to be, for example,

An arc of length $10$ of the circle with radius $3$ whose centre coincides with the large circle.

Consider an arbitrary curve. For a circle of radius 1 to intersect with this curve, the centre of the circle must be within the strip of parallel curves which are within a distance 1 together with the semi-circles of radius 1 centred on the endpoints. Diagramatically, this looks something like the following (apologies for the bad drawing, given curve in bold)

Now I think it can be shown using integration that if the radius of curvature is everywhere greater than the "radius" of the strip (half the diameter) and the strip is not self-intersecting then the area of the strip included between the two corresponding arcs is equal to the length of the median arc (in bold) times the diameter of the strip. So for us, the area of the strip is $10 \times 2 = 20$. I'm struggling to find a clear reference to this formula but it seems to be confirmed here: https://mathcurve.com/courbes2d.gb/parallele/parallele.shtml
If the strip is self-intersecting or the curvature is too high at any point then we lose area from the overlap. Combining this with the area contributed by the semi-circles at each end we see that the strip arising from our curve covers a maximal area of $20+\pi$.
Now the the possible choices for the centre of the small circle are contained within the circle of radius $4$ whose centre coincides with the large circle. So, we just need to pick a curve with sufficiently low radius of curvature so that the corresponding strip is contained entirely within the circle of radius $4$ and our above choice suffices but the choice is not unique.
The probability that a randomly chosen circle will intersect this curve is then
$$\frac{\text{Area of strip}}{\text{Area of Circle of radius 4}} = \frac{20+\pi}{16\pi}$$

7
Paint the rectangle with least movement
33
What is the minimum number of straight lines to connect all the dots on this grid?
4
Dodecagon in a big circle
3
Hexagon in a circle
5
A Prime Length Rope into Prime length ropes
3
Coin around shapes: A Geometric paradox?
13
Not Quite a Pipe Dream
3
Tangential circles
8
Circle inside circle