I made a new puzzle game that you can play here. It is a variant of 2048 where there are tiles of two colours. You need to merge tiles of the same colour and value to increase your score. In more detail, the rules are as follows:

Here is a screenshot of the game: 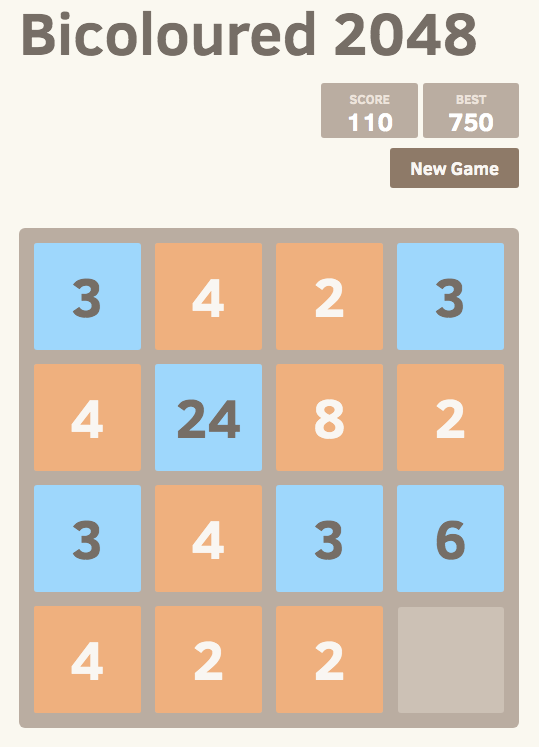 I am yet to find a good strategy for this game. It seems that you cannot use the same strategy as in 2048 - build large values in one corner. This is because the second colour gets in the way. So I am wondering what is the highest score possible? The best I have achieved so far is 968.

For the maximum score:

The board always starts with a 2 and a 3. So if the new block always spawns a 3, only 15 tiles are available for the 3-blocks (including the one from initial setup).

I decided to investigate this problem myself, since I am the one who created it. The best score found by anyone is currently 1510. My own best score is 1314. Next I wanted to see if this score can be improved with automated methods.

First I wrote a random game simulator. The simulator simply takes random moves (in any 4 directions). After 1 million games the simulator was able to find 888 with an average score of 183. Running it for 12 million games it managed to find 1070, but this is still far from human-level performance. I then noticed something interesting. If you restrict the simulator to just 3 directions (I used down, left and right) then it tends to find higher scores. The new simulator finds 1226 after 1 million games with a somewhat lower average of 177. In fact I noticed this strategy myself during manual play, by focusing on just 3 directions I found that you are more likely to build bigger tiles, which always stay at the bottom. It is also easier to play as you only need to consider a few possible moves. This is how I got my top score of 1314. After 34 million runs, the new simulator reached 1440, which is approaching the best human play.

But I wanted to get higher scores, so this is what I did. For each available move, run the 3-directional simulator for 1000 games from that point onward. Then pick the move that obtained the highest average score. This now gives us look-ahead and makes a decent AI bot. After running this bot many times for 1 week it managed to get a score of 3060. The final board position looked like this:

You can see that it managed to obtain both the 128 and the 192 tiles. I still feel that larger tiles could be possible, but this is quite good. Note that the bot is playing with the same input as what the human gets - ie., it does not know where the new tiles will appear. I managed to store how the game progressed and you can see it all here. Each move is shown on a separate grid. I wish I could make a video out of it, but not sure how to do that.

I am interested if anyone can beat this score with human or computer play?

Not the answer you're looking for? Browse other questions tagged strategy video-games or ask your own question.

7
Cooperative guessing against an evil god
10
Rocks and Lever (Game) - Goofspiel
7
Surviving Captain Nefarious
5
Crazy queen in checkers
1
Strategy in Coloring a 4x4 empty grid and the one who completes any 2x2 area of the grid is the loser
3
What is the fewest amount of clicks needed to create a tier 5 tile?
6
Playing blindfolded 2048
20
Is there any easy way to solve this lock puzzle?
7
A mix of 2048 and Match 3