The background text that follows is in this case not part of the puzzle, nor fictitious. The puzzle, which is self-contained, consists entirely of the image below; I have composed it as a genuine (albeit poor) tribute to the work of a great artist.

Today (21 June) marks the eighteenth anniversary of the death of the great Australian Indigenous artist Clifford Possum Tjapaltjarri. He was one of the pioneers in the 1970s of the dot painting technique, now ubiquitous and widely associated with Australian Indigenous art. These works make heavy use of symbolism and other techniques to convey information, often relating to the land. Possessing an extraordinary artistic vision, Clifford Possum produced a great number of remarkable works. One of his masterpieces, Warlugulong, sold for $2.4 million in 2007, the fifth-highest price ever paid for an Australian art work at that time.

The following simple little puzzle is a tribute to this artist, composed in a style reminiscent of his artform. Can you find the meaning it contains? 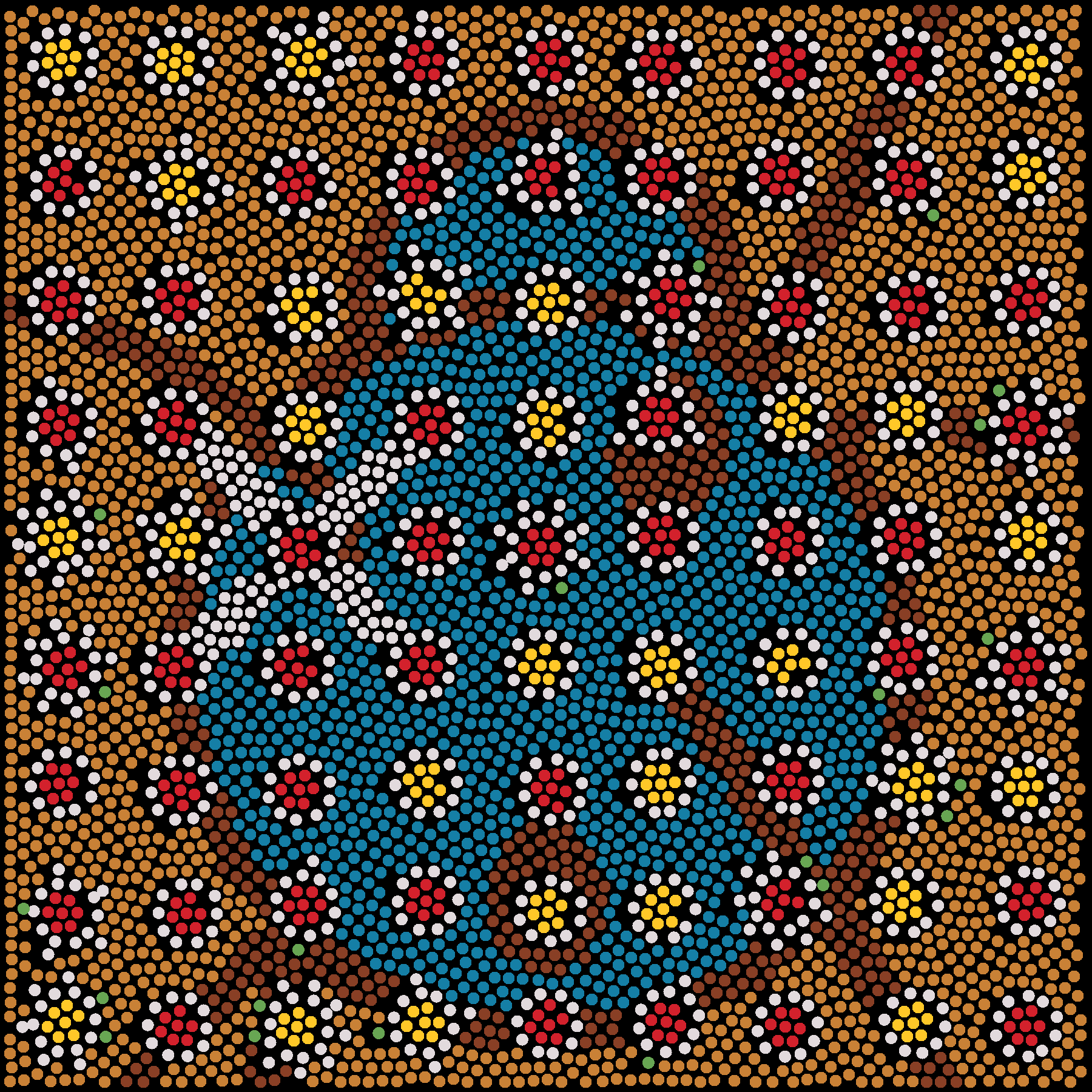 For any who may still be looking at this puzzle, the best way forward should be to use the numbers @DavidG. has found to guide you in your attempt to read the yellow and red circles.

For any who may still be interested in this puzzle, note that the red and yellow dots essentially form a set of strings in a two-element alphabet. They may not make sense as written, but @DavidG. has essentially provided a corresponding set of strings that contain (in some order), the numbers from $1$ to the string-length... Note that some data may have to be discarded due to the significant constraints of the puzzle's construction forcing the inclusion of non-meaningful data.

Just in case anyone is still interested in this puzzle (and because we got annoyingly close to a solution in the comments), here's what has been correctly deduced so far: @DavidG has (correctly) deduced a grid of numbers from $1$ to $9$. @Stiv has then read the red and yellow dots left-to-right using these numbers to produce a (correct) image. I have hinted that there is an obvious way to read this image (i.e. convert the binary sequences to characters, noting that the puzzle's stringent construction forced the inclusion of non-meaningful 'buffer' data), and @Berry has explicitly guessed the required conversion, but there the puzzle has stagnated.

Note that if this simple row-based reordering were all that was required, the puzzle would have been trivial to make. What made the puzzle challenging to make, even with allowing nonsense data, is that the red and yellow dots must also be read another obvious way to get the rest of the message, and then hopefully solve the puzzle.

For those who may have trouble reading the image, I have provided a pastebin which contains as much as is relevant of the image that I could describe in words. Owing to the inherently visual nature of this type of art, however, you will need to use at least some parts of the image to find the solution.
It is worth pointing out that artistic license has been used in the precise details of the artwork. Generally speaking, counting precise numbers of small dots is not important. Apart from the numbers of outer dots surrounding some of the circles, and the numbers of green dots, you do not need to count e.g. the number of small dots in each circle. If it comes to counting small dots, if I haven't mentioned it in the pastebin, it's not relevant. Precise details of the colours (e.g. hex values) are also not necessary for the solution.

If you take David G.'s partial solution, and:

Add the red and yellow coloring from the dots to the sudoku solution, you obtain: 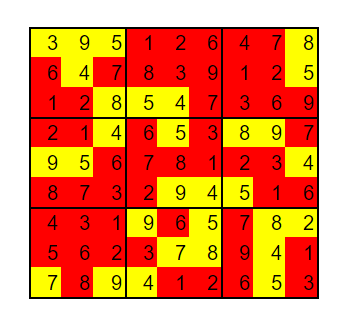 Then, as per Stiv's partial solution in the comments:

Sort the numbers per row, in ascending order, retaining their red/yellow coloring, you obtain this table: 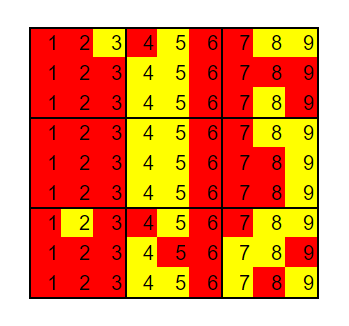 If you convert the colors of these rows to ASCII, ignoring the first value per row, you obtain the string "S02311�&5"

Sort the numbers per column, in ascending order, retaining their red/yellow coloring, you obtain this table: 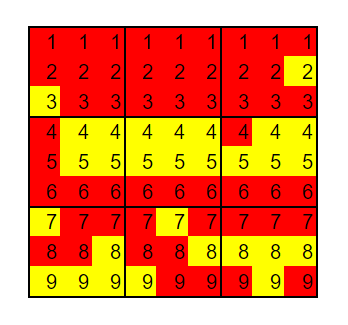 If you convert the colors of these columns to ASCII, ignoring the first value per column, you obtain the string "E13142�3�"

Looking at both these partial answers:

We realize they are coordinates! To be exact they convert to: 23° 11' South, 131° 42' East. The coordinates refer to a location in Australia in the Northern Territory's Western Desert area, to the west of Papunya. According to the Wikipedia page Anon included, this area is where Clifford Possum Tjapaltjarri lived and worked as a Tula artist.

The puzzle's visuals do not simply depict a bug, but it's actually a map of Papunya! The X marks the location of Papunya Tjupi Arts the Aboriginal art gallery!
Using Google Maps makes this clear: 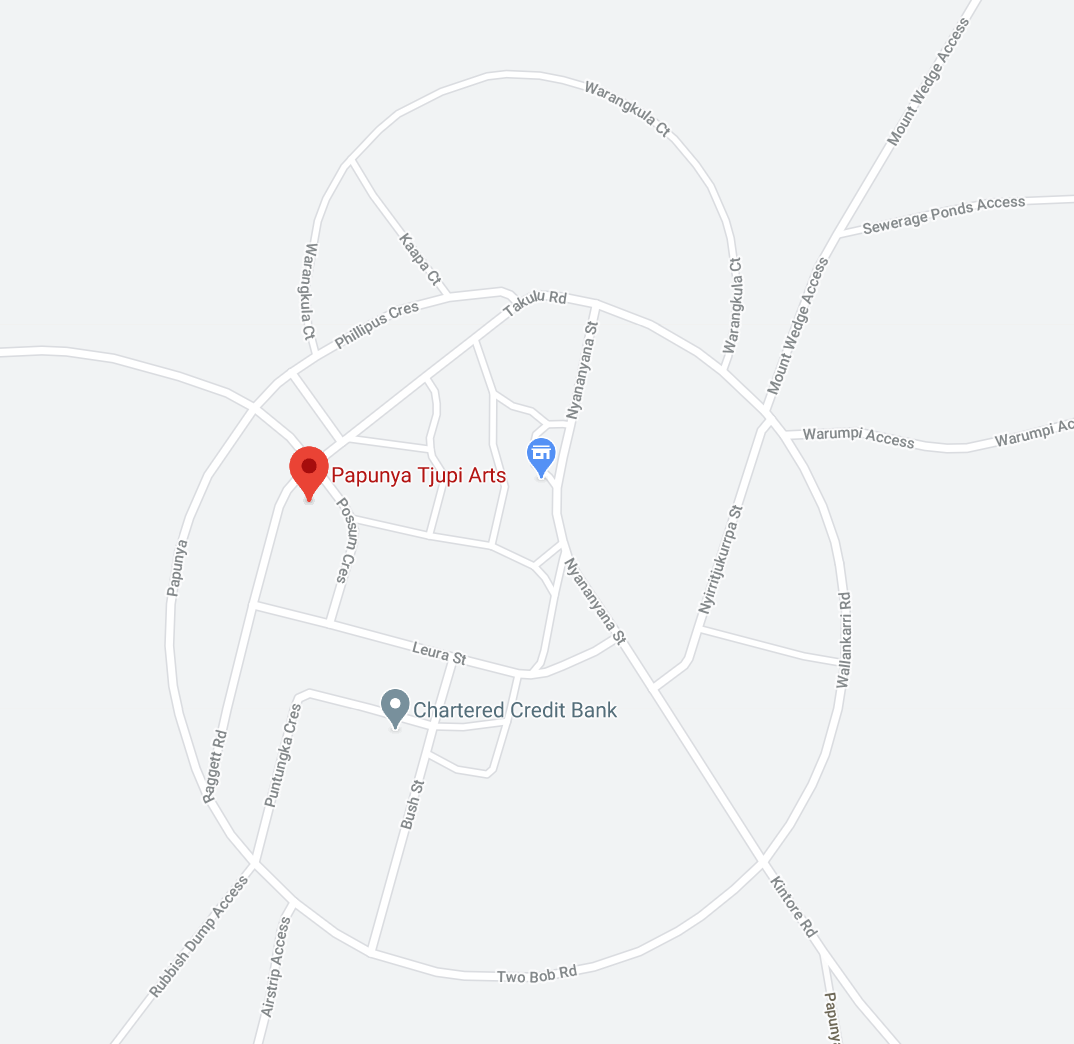 The dots around the rings are a

It solves as (assuming my transcriptions are right):

I have no ideas yet on the green dots, yellow and red centers, the bug, or the X.

Not the answer you're looking for? Browse other questions tagged knowledge enigmatic-puzzle visual steganography grid-deduction or ask your own question.

48
What does this modern art picture represent?
47
What is the title of this modern art painting, if not "Stars and Stripes"?
20
What is the central color?
44
Lepidopterology needed!
16
Dedicated image - but dedicated to what/who?
52
This is not a spam post
25
Untitled, for Now
5
A color mixing puzzle
14
A new adventure awaits! Let's go!
12
Circling the rectangle: A strange IQ problem