"Look at these flags and tell me-" Said Grandpa flashing a paper with many Flags on it.

"Which one does not belong to the group? All, except one, have one interesting commonality. One property they all show except one," He continued.

"And before you tell me the obvious square one, let me be clear. It has nothing to do with the shape or size of the flag itself, whether it is a country flag or not, the colors or where the countries come from-- the geography I mean. And no obvious things like only Japan has a circle or Israel has a star. We all know each flag is a different design."

"That makes it hard to guess," I complained.

"Well. Here is a hint. The commonality kind of relates to a 3 digit number-- chew on that one" He said with a smile.

I am more confused. Which one is it and why? 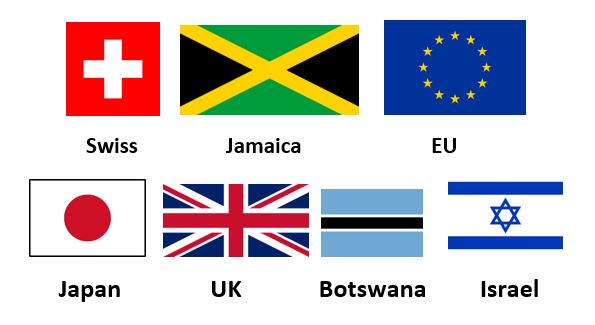 The odd flag out is

It is the only flag which does not exhibit Order-2 rotational symmetry - that is, if you rotate the other flags halfway round to turn them on their heads, then they will look the same, but the stars on the EU flag would be upside down!

Which means the 3 digit number is

180°, the angle through which they can be rotated

The three-digit number is

180 - representing the degrees of flipping

The Japanese flag is the only one that your grandpa drew with a frame (of color #000).

Considering the accepted answer, I would respectfully suggest it is either "wrong" or at least not unique, because there are at least 3 valid answers all involving the same basic operation:

It is unclear how (or if) 'Grandpa' intended one of these to be "more unique than the others".

Original phrasing of this answer:

The odd flag out from THAT definition is also the most different in other respects:

It is the only flag labelled in the question by an adjective rather than a noun.
As acknowledged in the question, it is the only square flag (implied by the rotation by 270°, but a non-symmetrical square flag also exists - Grandpa could have included the Vatican City flag to force this answer over the other one, but not sure how he could have disambiguated the other way)

They can all be rotated 180 and look identical, except the EU flag

The correct answer is the EU flag, but the reason in the accepted answer is wrong.

The reason has nothing to do with the design of the flags. All the flags except for the EU belong to countries which have 3-digit numeric country codes defined in ISO 3166 (see https://www.iban.com/country-codes for example).

The EU is not a country, and therefore does not have a country code.

Not the answer you're looking for? Browse other questions tagged pattern odd-one-out flags or ask your own question.

10
The mystery flag - twisted
17
What is the link between these countries?
4
Which one doesn't fit in?
10
Who doesn't belong to this universe?
14
Twelve Labours - #10 Meat Monster
16
Connect Wall of Flags: Don't Embarrass Us
44
"I claim this corner of the world for Britain!" - What game are Alex and Brooke playing?
12
Flagging Interest
6
Which one doesn't belong?
45
Which country flags can you make in Tetris?