This is a themed cryptic crossword, with five answers sticking to the theme. 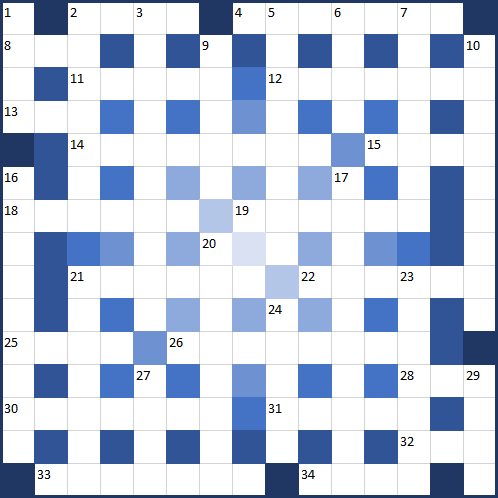 DOWN
1. (See 13-across)
2. Curt men ordered a certain brand of multivitamins (7)
3. Refined new composition in the key of G, changing meaning (10)
5. Robot's left with unit of information within; confined in zero gravity like a satellite around Earth? (8)
6. Wizard John's defense? (4)
7. Primarily old, degrading ruins, interspersed, points to a group of historical places briefly (7)
9. Saved tattered writings (5)
10. British aircraft are unnaturally overpowered way after (9)
16. Before noon on both sides of street/road, surrounding eastern capital (9)
17/18a. Anticipate time of event, a desire about it: for them to bring back genre of music (4, 3, 3, 6)
20. Rhythm section becoming prominent from the fifth EP, "False Album": every second of it brought about constant funk, at last! (8)
21. Possessing immense power, with respect to besieging east and west of Lithuania (7)
23. Appear excited without a single note to ready up (7)
24. In Athens' west, stone bulwark ultimately turning crooked (5)
27. (See 8-across)
29. (See 2-across)

P.S. In addition, I have thought about one clue for a while, because it uses a method of cluing that many may perceive as unfair. However, I really want to preserve its surface reading. To the Ximenean adherents more devout than I am, please don't burn me alive for this :(( I promise, though, that, in the future, whenever I use this method of cluing again, I will make use of much fairer examples. (For now though, to be kinder, I will say that the clue needs **two spaces** for the cluing to be at its fairest, though the surface reading be ruined.)

P.P.S. I am aware of the three consecutive unchecked cells in 10-down and 16-down. I will also make sure to not repeat this next time.

P.P.P.S. The blue colors are just for aesthetics. I'm tired of seeing crosswords all black and white :P

P.P.P.P.S. Finally, this is my second try at cryptic clues, but the first at cryptic crosswords. Do provide feedback, especially if I have erred in cluing methods. 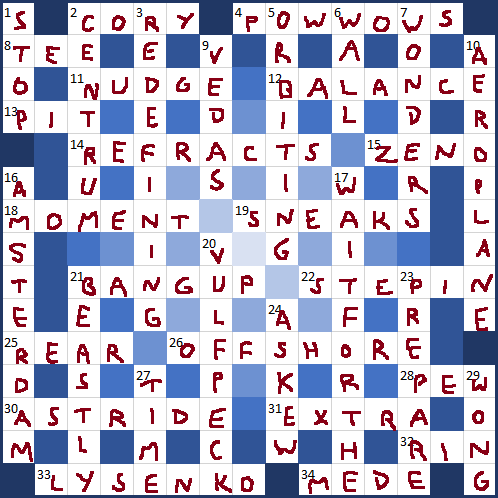 11a refers to musician Josh Dun.
In 30a, the Swedish author is Astrid Lindgren.
In 34a, "guy who lost fiancée" is Ed Brown from the reality show 90 Day Fiancé.
In 6d, "Wizard John" is John Wall of the Washington Wizards.
In 7d, the "points" are compass points (west, north, east, south)
In 24d, "Athens" needs to be read "A, then S". This is the clue mentioned in the P.S. which needs two spaces.

5
Cryptic Crossword #2: Stack-in-the-Box
8
Where can I find cryptic crossword answers explained?
12
Yet another mass-produced Friday cryptic
6
When you give a cat a crossword
7
Olympic host covered in advertisement
11
No Holds – a barred crossword
8
Sharing (words) is caring
11
Sun, sea and sand – A letter from Gladys
7
Fifty countries – A letter from Gladys