"Whose idea was it to say that we'd answer every complaint we received?" Svetlana was sat at Coldport City Council's Complaints desk staring at a sheet of paper. Bob, her colleague, looked up. "The Mayor's, I think," he said. "What's the problem?" Sveta passed him the paper. "Apparently," she said, "we have to solve the crossword to determine the complaint. All I know is what's on that paper, and that it's a complaint about that new Bulgarian restaurant."

This is a cryptic crossword with letters latent: all the clues contain an extra letter that must be removed before solving. Removing the letters leaves real words. The extra letters spell out a (slightly ungrammatical) phrase that should help solvers determine the complaint that is being made. To further help solvers, it is recommended that blue shaded cells are filled with lower-case letters and all other cells use upper-case letters. All but one entry may be found in Chambers Dictionary, and one entry is an abbreviation. Solvers should show the completed crossword, the hidden phrase, and explain what the complaint being made is.

NOTE: 20down is not letters latent because I missed it out in the clueing list and putting it back in properly would alter a significant number of clues around it. 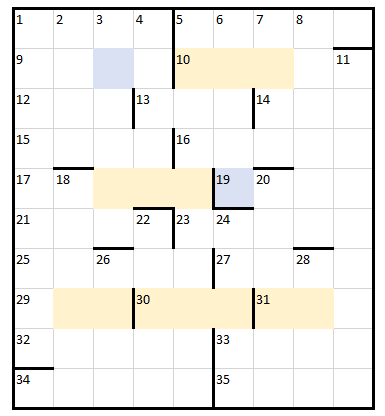 [Any feedback on the clues is welcomed as well; generally I think the clues make more sense without the added letters as I think that's the most reasonable thing for the solvers.] 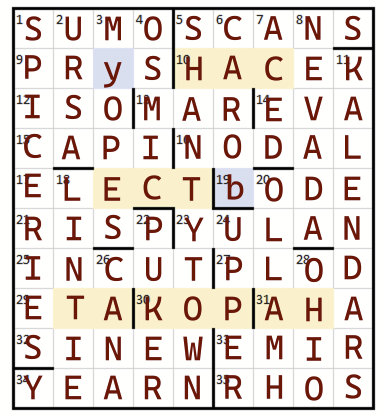 I'm still thinking about the wordplay for 33a and 35a, though I have all their letters. I'm not sure I quite grasp the parsing of 24d.

we should, as per the remark that LATIN AND CYRILLIC ALPHABETS SHARE LETTERS, interpret the shaded letters as Cyrillic, which is why some needed to be lowercase. This seems to yield something like У НАС ЕСТЬ ТАКО РАН which Google Translate tells me translates from Bulgarian to English as WE HAVE SO EARLY. The OP kindly informs me in comments that there's a minor error, the К and Р being transposed ... and У НАС ЕСТЬ ТАРОКАН apparently translates as WE HAVE A COCKROACH. Ugh!