Suppose a 'Fillomino tiling', much like a completed Fillomino puzzle, consists of a set of polyominoes covering a region without gaps nor overlaps, with no two n-ominoes of the same size touching along an edge. (touching at a finite number of points, e.g. corner-to-corner, is OK)

Most Fillomino puzzles concern tiling a bounded rectangular region, but what about tilings of the infinite square lattice? In such a tiling, what is the largest possible fraction of the plane that can be legally covered with singlet squares ('monominoes')?

If I've calculated correctly, I think the best fraction that can be achieved is

We can adopt the following pattern 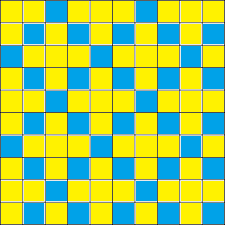 The shape with the fewest number of tiles which may legally be surrounded by monominoes is the cross. It makes sense then to fill in any intermediary gaps with cross shapes. The resulting figure arises from constructing a checkerboard pattern an converting the colour of every second square on every second row (this is where the counting comes in). Obviously, not a full proof but a reasoned argument.

Proof that the pattern found by @hexomino is optimal

Using that colour scheme, polyminos can have the following kind of internal "nodes" (up to symmetry)

We can immediately notice that:

The "A" node is illegal.

The optimal pattern doesn't use the "B" node.

But then, the highest density that can be achieved is: 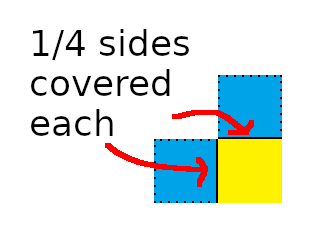 As an aside, such a pattern actually exists as well:

A staircase made out of "D"s.

, although the diagonal strips must be terminated at some point to avoid them being "infinimonos".

Since we already know that there's a better density possible, the assumption is false by contradiction.

The optimal pattern must contain the "B" node.

Every "B" node must be connected to some other node, but it's only legal to connect it to "F" node, or a single place on the "E" node.

1/3, since no other "B"s can be connected to the same "E", making them together cover all of the sides of a monomino in total, at the cost of two nodes. 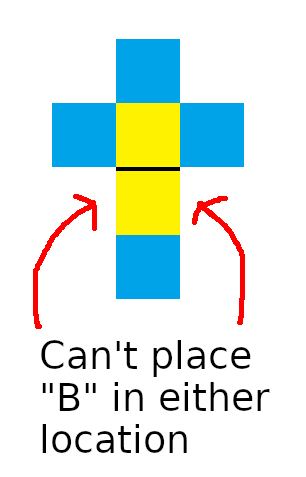 This still holds even if you try to connect other nodes, since we have already shown that they can't contribute to a density above 1/3

(This point is a bit important, because if any other node could act like a "outlet splitter" to fit more "B" nodes, we could perhaps increase the density. But only the "F" node can fit more than one "B")

This still leaves the possibility of perhaps fitting in a few extra "C", "D", "E" or "F" nodes, but since they can't contribute to a density above 1/3 without fitting in more "B"s (which we have shown is not possible), that would only make the density worse.

Since the case of connecting 4 "B" to an "F" actually is geometrically possible (it tiles), it's the optimum solution. 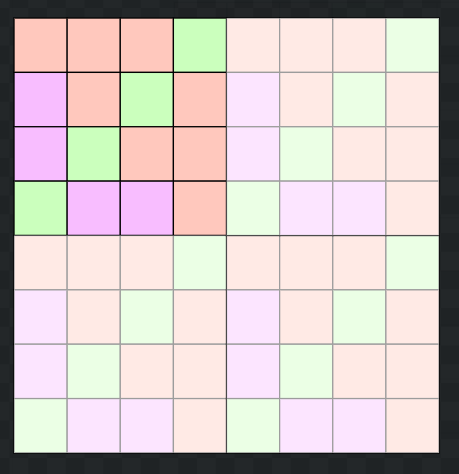 Not the answer you're looking for? Browse other questions tagged combinatorics tiling or ask your own question.