Consider the following position in a game of Binary Homeworlds. 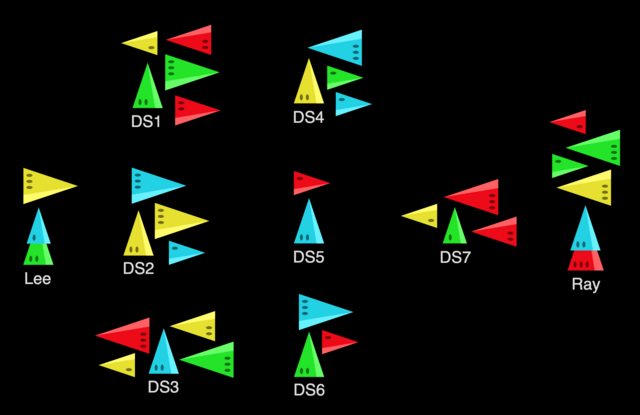 The stash is empty.

Lee has just moved. His move was not "pass." What was it?

Am I the first here, too? I have an idea:

Lee's move was M Y3 DS7 DS2. Here follows the explanation: -- Could Lee's move have resulted from a sacrifice? -- Sacking a Yellow ship and moving a ship to that Yellow star (Bank empty)? This couldn't have been the case, because none of the Yellow systems has only one ship. -- Sacking a Green ship and building it again where there is already a Green ship? No. There are no systems with two or more Green ships. -- No other sacrifices will keep the Bank empty. So, Lee must have done an ordinary move. -- Lee could not have Captured anything. His Red ships are everywhere smaller than the other ship he owns there, so he could not have used it to capture anything. -- Lee could not have Traded anything (because the Bank is empty). -- Lee could not have Built anything, because if he did, there must be two ships of the same color somewhere AND green. -- So, Lee must have Moved something. -- Could he have Moved (or Discovered) from a Yellow star? No. DS7 is the only system connected to the two Y2 stars where Lee has ships. But Lee has no ships in DS7. -- Could he have Moved a non-Yellow ship from a star system with a Yellow ship? No. The only system with a Yellow ship is his Homeworld, and it is not connected to any other star systems. -- So, Lee must have moved a Yellow ship. It couldn't be the one in his Homeworld, because it's the only ship there. So, it must be the Yellow ship at DS2. This system is only connected to DS7. Hence, Lee's move was: M Y3 DS7 DS2 as stated.

Not the answer you're looking for? Browse other questions tagged board-games retrograde-analysis outer-space homeworlds or ask your own question.