What should you do to maximise the amount of gold you get? You have to prove that it is the maximum.

Suppose you have $r$ red lamps and $b$ blue lamps. What order should they be put in to maximise the score?

If you put a blue lamp in a position with $x$ reds to the left and the remaining $r-x$ reds to the right, it contributes $x(r-x)$ to the score. This is maximal for $x=\frac{r}{2}$. The same holds for each blue lamp independently of the other blue lamps. Therefore the optimal arrangement with $r$ reds and $b$ blues will have the blues in the middle with $\frac{r}{2}$ red lamps on either side.

Now that we know the arrangement, how many red lamps is optimal?

Jaap (and many others) already solved the problem by calculus (and other kinds of maths), but this geometry based solution had such a nice symmetry to it that I wanted to post it anyway.

First, let's start by figuring out the general colour pattern. Given a single blue and N reds, where should we put the blue? Let's put a reds before the blue, and b reds after. Since our score is going to be "a times b", we can turn this into a geometry problem:

Maximize the area of this rectangle 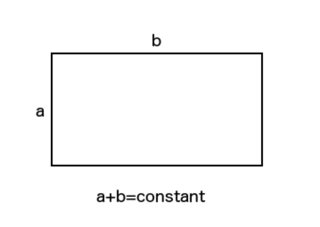 The maximum is "obviously"

a square, with a = b. A longer rectangle would be thinner, and therefore have smaller area than the square. Or as the old multiplication rule says: "deviating from a square shape by 1 unit decreases the area by 1 unit". $$ (x+1)(x-1) = x^2-1$$

smack in the middle of all the reds.

Then, we need to decide the number of blues we should add. Let's call it c. Each blue gives us "a times b" points, for a total of "a times b times c", so next we get to solve the exact same problem as before, except Now in 3D!

Maximize the volume of this rectangular box 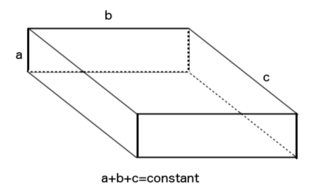 As before, the intuitive answer is the correct one, and we get the maximum points with

a cube, that is, a = b = c. If a box has a non-square side, we can always make a bigger box by turning that side into a square with the same perimeter, while leaving the other dimension untouched -> the maximal box cannot have any non-square sides.

So we should put

50 blue lamps in the middle, with 50 red lamps both before and after them

which, if turned into a sphere of solid gold, would be just about the size of a standard bowling ball (diameter difference < 5%), and easily heavy enough to completely crush us. Maybe that was the genie's ulterior plan? Maybe we should figure out a less effective colouring, this deal seems suspiciously good for us..

I'm going to shoot for a ELI10 answer (because a lot of the answers seem pretty complicated or are already assuming things not explicitly proven, such as the lamps being together in 3 lumps.)

Okay - let's say the lamps are all mixed up with no pattern. How would we figure out how much money we'd get?

Well, one easy way would be:

Something that's important: when you're looking at a blue lamp? Then the rest of the blue lamp locations don't matter at all. They could be right next to it, or far away - it doesn't affect anything at all.

Let's go the other way. Each time the blue lamp changes place with a red lamp, our amount goes up... until we get to 15 on one side and 15 on the other - the same amount on each side. There's some math we could show, but when you're multiplying numbers together that have to add up to some number? Then the way to get the largest number is to make all the numbers the same (or as close as possible). 1x9 is smaller than 3x7 is smaller than 5x5.

So let's move that blue lamp into a spot where there are an equal number of red lamps on either side of it.

How much money would we get? Each blue lamp gives us the exact same amount of gold now - they've all got the same number of red lamps to the left and to the right - so we get:

So now it's just a question... how many blue lamps works best? Well, remember how if we're multiplying numbers together that all have to add up to a specific number, how we get the highest value? All three of those numbers need to add up to 150. So we want all three numbers to be the same: 50.

Then, we will have:

To optimize the distribution of the group, we need to:

For a given blue lamp, suppose there are $x$ red lamps earlier in the ordering (so $R-x$ later). Then that blue lamp is in $x(R-x)$ scoring triples.

Not the answer you're looking for? Browse other questions tagged mathematics no-computers combinatorics optimization or ask your own question.

3
Gold and Silver Cubes
6
Capture The Stones
5
Colored Cubes (Red, Blue and Green)
11
Lots of Gold Stacks and a Balance Scale
1
My Friend, 4 kids and gold and silver coins
2
33 stones into gold transmuter
1
How to divide them into groups
11
Wizard creating a jewelry