On the three paths of a station are A, B, and C types of train cars as shown in the figure. 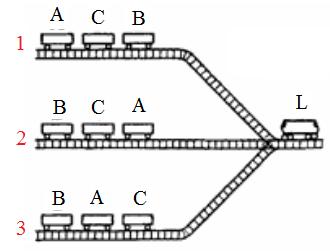 A locomotive driver (L) can attach from 1 to 9 train cars to a locomotive at any time, move them to the right path, and then return them to any left path.

For example, if the locomotive picks up 2 train cars from track no. 3 to track no. 1, then after such an action, the distribution of train cars along the tracks will be as follows:

It is necessary to develop an algorithm for the driver's actions to sort train cars. On each path, the train cars the same type should be (it doesn’t matter which path).

Question 2. It is necessary to show that your solution is the shortest.

Here is an optimal solution:

I reached to a 9-step (8 moves) solution it is as follows:

(although I could not understand the 123 notation; sorry about it)

2
Based on 9-trains puzzle

12
Ernie and the Underground Network
15
Tommy's Train Tracks
17
Maximize the number of paths
5
Weirdly Numbered Cars
9
How many hexagonal paths?
3
5 cars in a roundabout traffic
13
Placing 9 cars into a 4x4 carpark