I've been cubing for a couple of years now, so I'm quite familiar with all the various finger tricks and different ways to move faces and slices. Most of the ones I came up with when I started were natural and intuitive and fell inline with the accepted standard. I have ditched a few in favor of more efficient ones and adopted some handy ones that I never thought of on my own.

One of them still bothers me though: I initially started doing M slices (rotating the middle vertical slice towards you) with my thumb (either left or right, depending on context), placing it on the UF edge piece and pulling down. 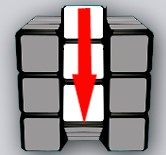 All techniques I have found say to do it with the middle or ring finger, placing it on the DB edge and pushing up, but this feels way more awkward and less intuitive. (I do M' and M2 moves as normal, placing ring/middle on DB and pulling under the cube toward the front.) There are actually a number of M slice algs that people avoid because they are awkward and slow, but I find them fluid and efficient using my thumb for M moves.

There is no way I'm the only one to think of this. Surely there have been plenty of experienced cubers that discovered both ways and decided for whatever reason that pushing up from the back was better then pulling down from the front.

So is there something I'm missing here? Are thumb M moves bad for some reason? Is this actually a thing and I have somehow just missed every single reference to it?

The thumb push requires moving the hand doing the push a lot and when I do it, it greatly destabilizes the left or right face I'm holding. Usually it's good to have hands remain close to "home grip". If you can execute well and it does not hold back TPS or require too much of a regrip then there is no problem

I think it partly stems from the fact that most PLL's that need M moves require double flick M2 moves. The H and Z permutations are most commonly solved with

, both of which have lots of M2's. Although thumb M moves can work well for single slices, I think it'd be much harder to do an M2 just as fast as a double flick with your back ring/middle fingers. Since most CFOP beginners learn PLL as one of the first steps of getting into advanced solving, they'll probably learn how to do an M2 before getting into fancy edge algorithms using M and M' exclusively.

It really comes down to personal preference. If it feels better for you and you can get get comparable results, then use it! I'm always curious when I see people start using an alg that they don't like just because it's 'mainstream' instead of one that they enjoy and actually fits their turning style. Everyone solves differently, so just find what works best for you.

I'm by no means an expert on fingertricks, so I would recommend seeking out better advice on the speedsolving forums, or executing reconstructions of really good solves including matching the fingertricks.

As you might imagine, there are quite a few ways to perform an M move. You could push from DB with your ring finger or pinky. I prefer pushing FB with the ring finger or pinky. As suggested, you could push down on UF with your thumb. You might do half of an r to make it easier to push down FB with your thumb. You could alternatively perform R r', or r' R. Which of the above you choose is a trade-off that depends on a multitude of variables.

To speculate on why one way would be more popular than another, even if it offered no advantage it might be that top cubers are already comfortable with that technique. The execution for M2 I'm most familiar with is a double flick on DB, first by the pink, then the ring finger. So having practiced that, a single flick is easier to get down than a completely new technique. I've already practiced how to hold the cube, and which pieces I can look at. What you've practiced will dictate which choice you tend towards.

Not the answer you're looking for? Browse other questions tagged rubiks-cube twisty-puzzles speedsolving or ask your own question.