Alice and Bob invent a game

The rain was still falling in Wales, and Alice and Bob were terribly bored of having to stay inside the caravan. With just a deck of cards to entertain them they had played all of the card games in their repertoire – several times over.

Suddenly Alice had an idea for another game they could play. Putting aside 21 cards, including the aces (“Too ambiguous,” she said…) and the two jokers, she dealt out two hands – one for her and one for Bob.

To start the game off, Alice laid down three cards – the jack of diamonds, the three of hearts and the four of clubs:

“So that scores me 24 points,” she said with a flourish, before replenishing her hand.

“Oh,” said Bob, “so we’re playing properly then? In which case, I’ll play these…” Bob laid three of his own cards on the table (three of diamonds, six of hearts, king of clubs):

“25 points,” she announced, collecting 5 more cards from the deck.

Bob smirked. “Oh Alice, I hate to do this to you again…” he said, laying down five cards himself (two of spades, two of hearts, three of spades, king of hearts, five of clubs):

“That’s 33 points – read ‘em and weep…” Bob sat back with his arms behind his head, thoroughly gloating. It was with some discomfort therefore that when he looked across at Alice he saw she was smiling and shaking her head.

“Oh Bob,” she said. “Oh Bobby Bobby Bob Bob… You’ve made two big mistakes there. For starters, you could have got yourself 7 points more if you’d played the five of clubs first. But more importantly, because you’ve played those cards, I can play these…” Alice laid down five cards (queen of spades, three of clubs, two of diamonds, two of clubs, five of hearts):

QUESTION: Make sense of the cards played and the rules of this game to tell me – what game are Bob and Alice playing here? Furthermore, explain Bob’s double-mistake. Please include an explanatory diagram in your solution.

So building on kristinalustig's answer they are indeed playing

The cards are assigned as follows

All Jacks are J
All Queens are Q
All Kings are K
The Nth card of a given suit is the Nth letter in that suit's name.
For example the 3 of HEARTS is A
Aces are discarded because there is an ambiguity about whether they represent A or the first letter of the suit.
Also the 6-10 of clubs, the 7-10 of spades, 7-10 of hearts and the 9-10 of diamonds are discarded because the suit names are not long enough.

Alice is playing the word JAB, normally worth 12 but the first move played on the star is a double word score so it gives 24. This is also why Bob says "we're playing properly then?"

The letters played by Bob are ASK. Bob must play this down. Since he scores 26 points he must get a score for increasing the length of JAB also so the board must look like this

The A and K must be on double letter scores so the B is on the star in the middle.

SMOKE. Putting the S here on the end of ASK produces a score of 25 so the board looks as follows

PEAKS where the S must be placed on the end of SMOKE to give a triple letter score for both P and S. This gives a score of 14 for SMOKES and 19 for PEAKS, giving 33 overall. The board now looks as follows

"you could have got yourself 7 points more if you’d played the five of clubs first."

If he played SPEAK instead going down, he would have gotten a double word score for SPEAK to give 26 overall, 7 points more.

To play the letters QUILT

QUILT is on a triple word score and Q is on a double letter. This gives a score of 72.
The new words PI, EL and AT give scores of 4, 2 and 6 respectively to give an overall score of 84

For those unfamiliar with the game in question

Here is what a Scrabble board looks like. The B in JAB is located on the star. 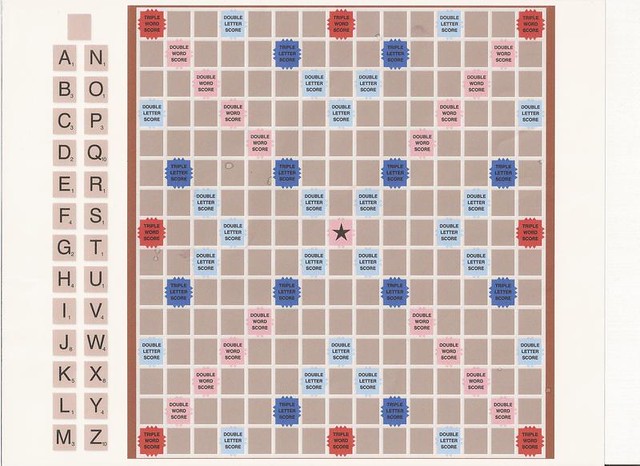 I spent quite a while working on this yesterday and today. I only have a partial answer.

I started with the assumption that

The game they're playing is Scrabble.

I chose this assumption because:

The turns they're taking relate to each other ("because you've played these cards I can play these") and the order they're laid down also matters. In addition, the scoring feels Scrabble-y - especially the big "triple word score" at the end.

Given this assumption, I tried:

Assuming that each suit is an operation performed on the card's value to give it a new value (which is then converted to a letter), I wrote some python code to generate possible solutions. (can share the code if interested.) I tried with addition/subtraction/multiplication/division, and I tried with only caesar shifts, numbers 0 - 25. I narrowed it down by only evaluating the list of answers for the first turn to the list of legal 3-letter words in Scrabble worth 12 (as the center space is a double word score).

None of the permutations I tried, given the other constraints of Scrabble (only one of J, X, K, etc.), produced a set of results that give words in English that adhere to any legal placement on a Scrabble board, or even partial words that might be combined with other turns to produce words.

Trying different possible, more complicated operations that might work on the cards, like, the first card played per turn has a shift+1, second shift+2, etc. But I think I'll only proceed down that path if I hear that I'm even VAGUELY on the right track.

Not the answer you're looking for? Browse other questions tagged enigmatic-puzzle cipher board-games cards or ask your own question.

3
A game of Green Jack
45
A five card trick - How does it work?
11
The Fitch Cheney Card Trick Extended
6
The Great Houdini's awesome card guessing trick (1)
14
Find the winning strategy for this card game
7
A game of Connect 4++
7
Alice and Bob play at cards
15
What happened today? Asked the magician
28
PSE Advent Calendar 2021 (Day 11): What Child – Er, Game Is This?