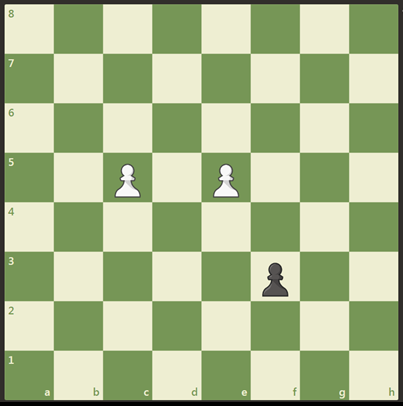 On an ordinary chess board (8x8) without any pieces on it as a starting position, two players will alternately place a pawn on any square (unoccupied) so that the first player that form a square (upright or tilted) with his 4 pieces on the board wins the game. This question mainly search for the best strategy to win as white or else black. Draw is possible when both players pieces can not form a square anymore. From the above position, what is the best move for black?

If it is white's move then he can win like so:

Now black has to stop white at both e3 and b4, which is impossible, so he loses. Note that white can win by doing the same starting with d6. So black has already lost this position. This also means that if white goes first on an empty board then he can guarantee a win, by forming two pawns in a straight line (like in the diagram).

If you remove tilted squares then the game becomes a lot more balanced in my opinion.

Suppose black passed. White could easily win in three moves: c3 forcing e3, then d4 threatening to create either of two squares. White could also use the same tactic starting with e3, c7 or e7.

If black doesn't pass, they can prevent this sequence starting c3 in three ways: play on one of the squares used for the sequence (c3 or d4), play on one of the final threat squares (d6 or b4), or make a play such that their forced next move will create a threat of their own (f4 or f2). Of these moves, only d4 or d6 will prevent all four sequences for white.

Suppose black plays d4. White can play c7 (forcing e7), then a5 (forcing a7), then b6, threatening to win on two squares; black never has a threat in this sequence. Similarly if black plays d6, white plays c3, a5 and b4. So black can only survive for a few more moves, and survives longest if their next move is d4 or d6.

Applying the following rules with revision:

Here is a line for continuing the above position. 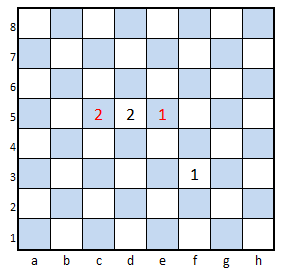 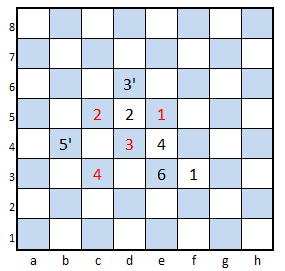 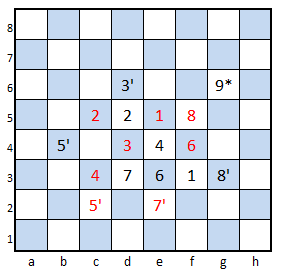 Not the answer you're looking for? Browse other questions tagged strategy board-games game-theory or ask your own question.

11
No-Connecting-4
7
2 bishops versus a lone king
22
Monte Carlo Chess
7
Domino Tiling Game
7
Given an $8×8$ square and a set, which contains the pentominoes and four $1×1$ squares
6
The Novice Chess Team that Won Every Match of the Season