GameDev: stuck with first puzzle design, would love resources to study from or algorithm suggestions!

First time posting here and I'm really, really hoping this is the community I've been looking for.

I'm developing a game, right now I'm in the middle of designing levels as the core mechanics have already been laid out in code. While designing levels I noticed that I could easily add some puzzles because the code was already there.

I've thought about a kind of puzzle that I've seen in many games but I don't know the name so google didn't really helped me.

To make it short you got multiple buttons, every button controls the rotation of some platforms.

In my case, as you can see in the image below:

All the rotations are clockwise, green is the final path, yellow dots are the rotation pivots 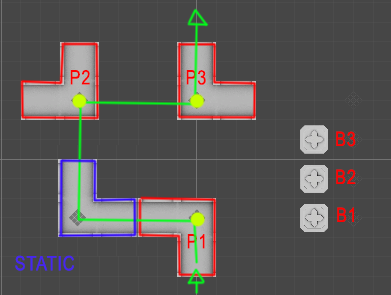 I don't know if this is the optimal solution and the design of this puzzle was based on mere luck.

What I'm asking here, hoping to find an answer, is if there is some algorithm for this kind of puzzles, some books or resources to learn about the design, because I really enjoy the touch that it gives to the game and would like to explore this puzzle world to find new solutions.

Thanks in advance, hope everything was clear as English is not my first language!

puzzle-creation algorithm video-games
share | improve this question | |
edited May 26 at 17:10

This is related to the mathematical field of graph theory, and your puzzle is essentially a finite-state machine. Each platform has 8 possible states, so the entire system has $8^3=512$ states ('vertices' in graph theory). Each button maps one of those 512 states to precisely another one (an arrow, or 'directed edge' in graph theory). It's not recommended to draw such a large graph, but you can imagine that following the 'button 1' edge eight times will lead to the initial vertex/state. For button 2 and 3, it's only a cycle of length four. Also, parts of the graph will be disjoint (separate) from other parts, which means you can never reach them from the initial (solved) position, and consequently if the puzzle is in such a state, you can never solve it.

I haven't looked at your puzzle in detail, but I imagine that there are only $8 \cdot 4 \cdot 4 = 128$ states reachable from the final position (the lengths of the cycles of each button); the puzzle will probably be harder if

On the other hand, the difficulty level of this puzzle might be perfect for your audience. You never know until your test!

Not the answer you're looking for? Browse other questions tagged puzzle-creation algorithm video-games or ask your own question.

18
Generating ice-sliding puzzles which spell out words
12
How can I create Fillomino puzzles?
4
logic problem/puzzle solving
8
Puzzle creator looking for feedback! Try this tough one! (Game giveaway to first solver)
11
Submitting a puzzle to the NYT
6
Tips for making board game victory sequence puzzles
8
Looking for a party puzzle
2
Coding puzzles with pen and paper
9
Puzzles like Sokoban?
4
Creating a puzzle with rotating parts and logical approach