How many ways can you find the word DIAMOND in this diamond?

In how many different ways may the word DIAMOND be read in the arrangement shown? You may start wherever you like at a D and go up or down, backwards or forwards, in and out, in any direction you like , so long as you always pass from one letter to another that adjoins it.

How many ways are there?

Generalize for a word of any length that can be found in such an arrangement. 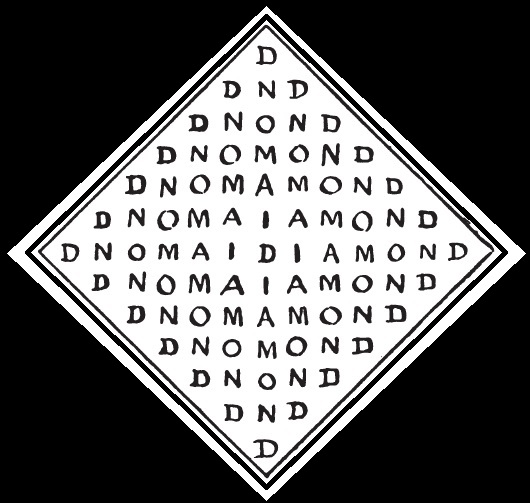 mathematics combinatorics
Share
Improve this question
edited May 26 '20 at 12:35

Here is a slightly easier proof than Rand al'Thor's.

Let's look at a simpler problem consisting of

The number of solutions to this simpler problem is

The original problem consists of

four such triangles. This leads to $4$ times as many solutions, except for the fact that four solutions are double-counted. These are the four straight solutions, belonging as they do to two triangles simultaneously.
The total number of solutions is therefore $4\times 2^6 - 4 = 252$

This easily generalizes to

$4\times 2^n-4$ assuming the word does not have a palindromic tail that would allow the final moves to be towards the centre.

the proof being as follows. (Thanks to @El-Guest for finding the error in my previous reasoning!)

So, let $k$ ($1\leq k\leq6$) be the number of steps taken on those orthogonal lines. There are then just 4 possibilities for the first $k$ steps, and each of the remaining $6-k$ steps can be taken in 2 possible ways. So the total number of possibilities, for each given value of $k$, is $2^{6-k}\times4$.

This assumes that rotations and reflections of the same path count as different from each other.

For a general word of $n$ letters, laid out in a diamond configuration like this, the answer will be at least

but it may be more if doubling back on the word is possible, e.g. for palindromic words or words like BANANA. In this case, the word DIAMOND can only be spelled out starting from the centre and going to the edge, which makes counting the possibilities easier.

20
Pursuit Problem: Mutineer trapped on an island
2
Beyond Bacon's Cipher
62
The Jeweller's Dilemma
3
LEVEL connections
2
Number of Ways to Make the Paths
11
6 nails String Art
9
How many hexagonal paths?
3
Cross the pond, but there's a catch!
8
Running Out of Digits, level 2
1
Square of Numbers #01 (4x4)