There's a park behind the local basketball courts, where I like to go for quiet time. The other day, a group of thirty people arrived with a basketball as I was sitting down. One sat next to me, introduced himself as Marcel, and said he wanted me to watch the game his friends were going to play. For the next hour or so, he said, the other twenty-nine were going to pass the ball from one to another; he challenged me to count the total number of times each player passed the ball. 'Including passes to themselves?' I asked; he nodded. I set up my gif camera. The players' shirts were numbered from 1 to 29. Player 1 started with the ball and began by passing it to someone, and they proceeded to pass the ball for what seemed like hours; finally player 1 received a pass and the game finished. 'So I just need to count how many times each player passed the ball in total?' I asked. 'Well,' smiled Marcel, 'those numbers definitely have a meaning, but once you've done that, you'll realize you've overlooked some details in counting the passes...' and with that he got up and left. When I got home, I spent hours examining the footage, until I realized something quite amusing I'd missed in the game.

So I present the puzzle to you, friends, as I think it's amusing even if very simple: Can you find the secret in their game? I'll know you've found it, when you give me a seven letter word.

Here's the footage of the game; I've edited it to colour-code the players by their shirt number with (irrelevant) colours to make it easier to analyse:

A downloadable copy of the gif can be found here. In fact, because I'm not as cruel as Marcel, if you don't want to spend hours counting passes, I'll give you a comma separated text file (here) showing the sequence of players who had the ball (i.e. player 1 begins with the ball, passes it to player 15, who passes it to player 27, and so on). This CSV is all you need to find the game's secret.

Brace yourself to realise that this puzzle is even cleverer than you first think... This is a special one...

The seven-letter answer is:

Count up the number of times each numbered player receives the ball to get the following 29-number sequence:

Note that if you rely on the CSV file rather than counting the passes in the GIF (which would take a very long time!) you need to discount the initial occurrence of '1', as this is the player just being in possession of the ball, not the result of a completed pass - thus there are 67 1's in the file, but only 66 of these are completed passes.

That the number 32 crops up a disproportionate amount of times here. Since the number 32 is the ASCII encoding for a space, this suggests we should convert each number into its ASCII equivalent. This yields (ordering the players numerically from 1 to 29 by their shirt numbers):

To replace the underscores with a seven-letter word, note that:

This puzzle is an adaptation of a very famous 'selective attention' test by Daniel Simons and Christopher Chabris, which @F1Krazy inadvertently linked to in the comments! In this, a group of white-vested players and a group of black-vested players pass a basketball between each other and the viewer is asked to count the number of passes by white-vested players. The catch is that at the end of the exercise the assessors reveal that while the viewer was so focused on counting the passes, somebody dressed in a gorilla suit walked right through the middle of the players, turned to face the camera and beat their chest before walking off again - and a large number of people do not notice this while their attention is focused on the counting!

For this reason, I believe the final sentence the OP is looking for is:

But did you see the GORILLA ?

HOWEVER - HOLD THE PHONE... So far this is little more than a glorified educated guess. But there is more - and it is worth looking into. You see, there is more that we can do with these data than merely counting the number of passes. We can also:

Count the number of passes between each pair of players and tabulate the results. This can be achieved in something simple like Excel (see the post-script if interested in the method).

If we do this in Excel and then shade all cells (using conditional formatting) that are non-zero, we see the following: 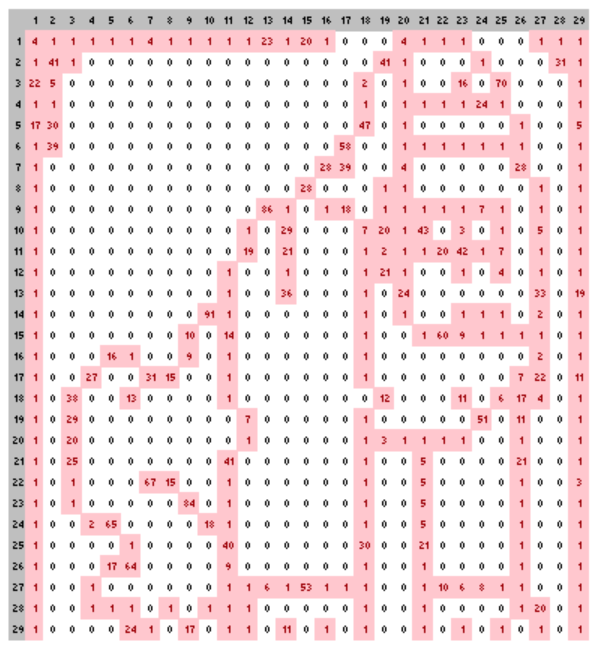 IT'S ONLY AN ACTUAL GORILLA!! Which we didn't originally see while we just counted the passes!!

- Import the CSV file, so each number occupies its own cell in row 1, starting with cell A1.
- In row 2, use the formula =CONCATENATE(B1,"-",A1) to form pairs of passed-to-dash-passed-from.
- Write the numbers 1-29 in cells C4 to AE4 and again in cells B5 to B33 - these form your labels.
- In each cell within the grid formed by these two label axes, enter the formula =COUNTIF(\$A\$2:\$CRO\$2,CONCATENATE(\$B5,"-",C\$4)). This then counts the number of times each pairing occurs among the concatenated numbers in row 2.

There may be a simpler way to achieve this, but this was my way!

Post-script 2: I also note the OP's choice of name for the character in this puzzle:

In the US sitcom Friends, Ross has a pet capuchin monkey called 'Marcel'! Clearly a pop-fiction nod from the OP there to an ape/monkey connection :)

(In response to this observation the OP pointed out that their true inspiration behind the name was Marcel Delgado, the stop-motion model-maker behind the most iconic of all screen apes, the original unexpected gorilla, King Kong. I wouldn't be surprised if the same man proved to be the inspiration behind naming Marcel the capuchin monkey from Friends as well...)

Not the answer you're looking for? Browse other questions tagged word enigmatic-puzzle visual steganography computer-puzzle or ask your own question.

39
Multilayer Image Steganography
5
What's the longest non-winning string in Insertion Ghost?
21
Emeralds bet - A round world
15
Mr. Yamaguchi's unusual message
7
I run on the edge of a diamond
2
Can you help me understanding the Stones game?
8
Can you figure out the password?
11
Chaotic Chess Game
7
Mystery Word Game: Square Wave with Dots
28
PSE Advent Calendar 2021 (Day 11): What Child – Er, Game Is This?