There's a puzzling little problem I found in one of my old maths textbooks (Basics of Madthematics). In the middle of a whole bunch of normal problems on calculus and algebra and whatever, suddenly there's this. The book has no answers either, and while some of the questions are definitely tough, I've had a lot of trouble with this one. I've devised plenty of possible phrases over the years, but never found a solution that I feel reflects the whole problem, or has four different ways of constructing it from the puzzle. Thus I thought I'd bring the problem to this site, since I know many of the puzzlers here are brilliant. Based on the other problems in the book, I think concatenation (e.g. $ab$) represents multiplication as usual, even with spaces in between. I promise it's not homework, I just really want to know the solution! I've scanned the page and uploaded it; hopefully that doesn't breach copyright. Can anyone solve it? 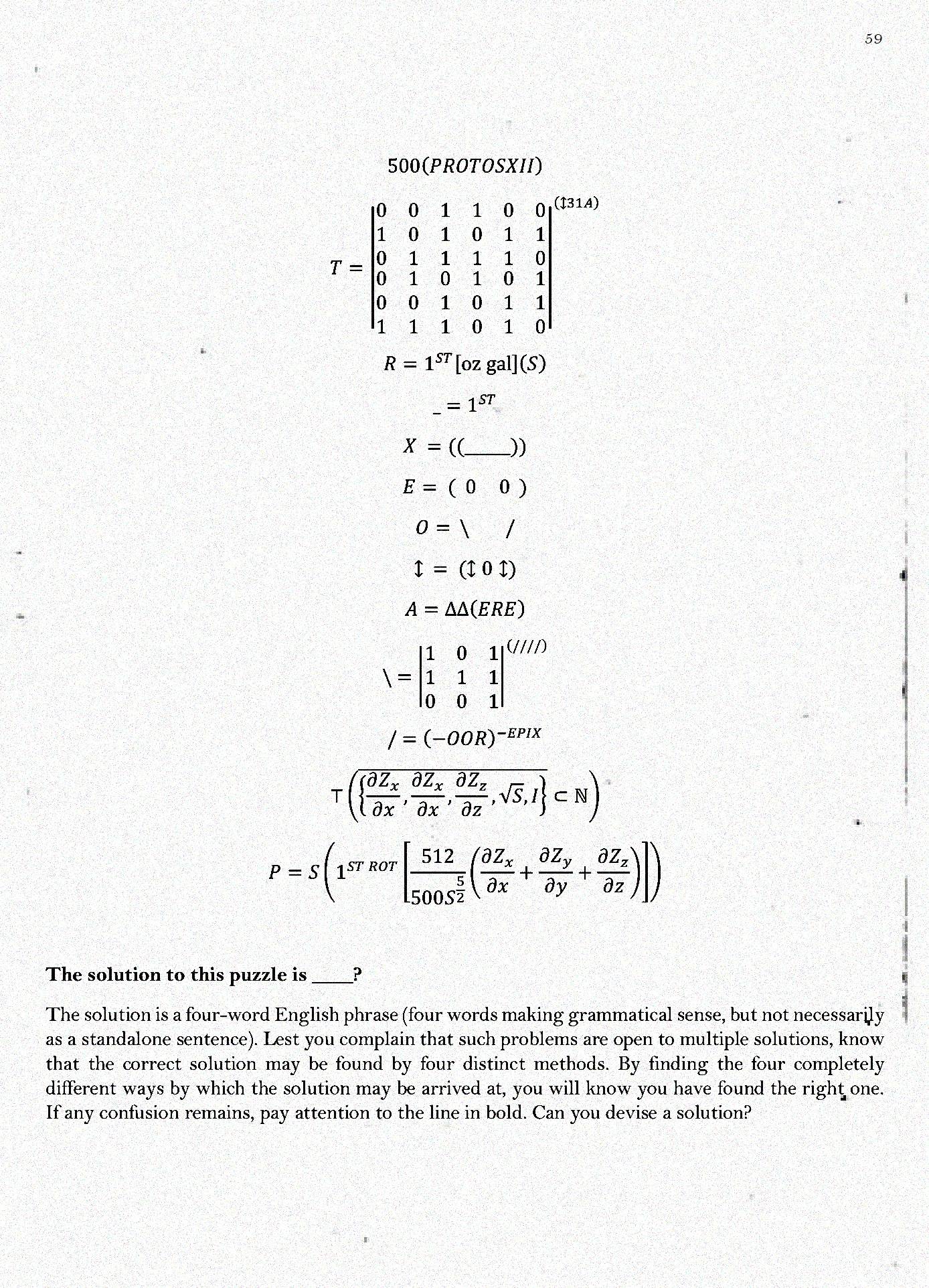 A quick clarification, as there seems to have been some confusion expressed in the comments over the provenance of this puzzle. Basic of Madthematics is not a real book; the image is not a real scanned page (the text and background noise are different resolutions); the puzzle is in fact original and I therefore obviously know its solution.

I'd love to see this problem solved, so I'll put down my thoughts on it. So far, the bull has been noted; this seems to point to one way of interpreting the puzzle to devise a solution, i.e. interpreting the RHS components visually/semantically rather than mathematically. I suspect a form of cryptic clue plays a role here (and I think the wordplay/definition delimiter - and in some cases the definition itself - is so obvious as to make many of them trivial). One of the other 4 methods should be obvious from where I found the puzzle (in a maths textbook), and I think the other two will become clearer as you approach the solution, which I suspect is somewhat meta. I imagine it will be easier to pin down the exact solution once we have partial solutions by some of the 4 methods. Feel free to post partial answers!

Since there has been very little progress on this puzzle so far, let me condense and reiterate the hints I have given. There are four methods by which the solution may be arrived at. Not all of these four are equally simple or obvious; in fact two of them will probably only be seen in retrospect when the solution is found by one of the other more obvious two. One of these is to interpret the puzzle purely mathematically. To do this, simply evaluate the given formulae in the most obvious mathematical way (which has not actually been done yet, although @PhysicsNoob has evaluated some of the lines). The resulting expression will have to be rearranged into a form which will give you the answer.

The second method is to interpret the RHS of the puzzle visually/semantically. The method in this case is not the same for each line. Some lines (like the bull) have an obvious meaning by this method. Others involve a simple cryptic clue-like interpretation of the RHS; the 'wordplay'/definition delimiter is in these cases included in plain sight, and in some cases the definition is so literal as to be trivial (note the solutions involved are not necessarily whole words, but could be letters).

Once you have partial solutions by these two methods, you will need to find a way to rearrange the mathematical expression, such that they become the same four word answer (bearing in mind that there will have to also be two other ways in which this answer can be obtained from the puzzle presentation; one of these two is similar to one of the others). The method at this step has a high dependence on wordplay (sometimes highly fragmented and phonetically approximate). That is the method of solution of this puzzle, which can theoretically be solved in four ways. Can you devise a solution?

Before starting off, I just want to state that I don't know the proper formatting, so the answer might be downvoted. Also, I might be pulling at straws for the most part, because I am just an engineering student trying to apply his brain at some puzzles, but here goes nothing-

My first guess is that all (or at least some) alphabets have a number associated with them. Keeping that in mind, a determinant for T can be calculated.

That comes out to be 2. Coincidently, a determinant is represented as Δ, and so that might prove useful when calculating the value of A. The thing in brackets above the matrix might just be the power (when turned to numbers) that we need to raise this Δ to.

Next, in R, I surmise that

[oz gal] might be a reference to "ounces (oz) in a gallon (gal)". That will come out to be 128. The reason why I don't think it is "gallons in ounces" instead is because that would be decimals, and who likes those! :P But then, keeping 1/128 in the back of the head doesn't hurt since S might be large, balancing out the 1/128.

I have some thoughts regarding 1ST as well (sorry, don't know how to write that).

It is a kind of a curveball...in a sense. Well, it should denote two things. a.) What is reads, first, and b.) 1^(SxT). In general, the superscript on 1 is in small letters. The use of capital letters, however, makes me think it has something to do with raising the power of 1, which would be 1 of course. As I said, kind of a curveball.

Someone might be curious as to how is my first interpretation of 1ST useful. Well,

Look at the P row. Doesn't that read like "1st rotate (and then the number inside tells the index)"?

I conjecture that S is a square number. You see if the square root of S still belongs to the set of Natural Numbers (second last line), it has to be a square number. Similarly in the last line, S^(5/2) kinda points in the same direction. Also, the bar above might indicate taking an average of all the five elements of that set.

If _ is equal to 1, that would mean X is either equal to 1, or 1111, as X is just a bunch of underscores written in succession, which can be interpreted as 1's multiplying, or representing a number as it stands.

Lastly, the partial derivatives of Z added up, it reminds me of the gradient operation. Also, these partial derivative terms are natural numbers in themselves, as they are part of the set according to the second last line as well.

That's it for now, I will update if I think of anything else.

Not the answer you're looking for? Browse other questions tagged mathematics knowledge wordplay enigmatic-puzzle rebus or ask your own question.

14
Cryptic Rebuses
11
Cryptic Rebuses at the Zoo
10
Cryptic Rebuses Continued
4
Properties of numbers...?
13
Coin removal problem
4
Solving an alphametic puzzle by eavesdropping
9
What is a " B & A" puzzle?
14
Is there a mistake in this vast rebus?
12
Circling the rectangle: A strange IQ problem