Ode to a Nightingale: a puzzling study in literary criticism

The field of literary criticism is an interesting and fruitful one, in which puzzlers might carve out a niche. This was recently brought home by a conversation I had with a sagacious old gentleman in the reading room of a library. I was immersed in a volume of Keats, savouring the lines of his greatest masterpiece, the Ode to a Nightingale1, when I was rudely interrupted by a few words muttered by an old man near me.

"Literary criticism is truly in a miserable state of affairs", he was saying quietly.

"What on earth makes you say that?" said I, taking the liberty of interrupting him.

"Why," he began, with animation, "they ignore the most important techniques, confining themselves to arcane speculations! Methods as simple as counting up letters within words, basic techniques that even a child could master, they entirely overlook!"

"Why," said I, "you think you can extract literary meaning from such dubious games?"

"Dubious?" said he, "why, take the very poem in front of you. There is more to that poem than any 'critic' can know, and it can be extracted by a technique that simple!"

I was a little taken aback, but took out my laptop to attempt what he had hinted at. He must have inferred my struggle from my furrowed brow, and finally interjected: "Don't you see it? Ignore all those other symbols! Look how many numbers you have in front of you - the poem is positively bursting with colour! Surely a young man of your wits can see at a glance the perfect geometry of it all! In literature, there are no empty words, so ensure you adjust your numbers appropriately."

I busied myself again, for I saw immediately to what he was referring. Eventually I looked up again, and met his subtle smile. "This is mere nonsense!" I said a little petulantly. "You're having me on!"

"No indeed," said he, not taken aback, "I merely wanted to show how difficult it is to solve such problems without genuine detective work. See this!" - and he slid a piece of paper towards me - "this is a poem2 I found in Keats' handwriting in a copy of Annals of the Fine Arts, after I got stuck at the same step as yourself. It is presented as a mere exercise, but I warrant you it contains the key to Ode to a Nightingale."

I pored over it a moment. "A strange way to begin," said I, "would not But do thy worst to steal thyself away have been easier?"

"Granted," said he, "that would not alter the solution, but at least allow Mr Keats some artistic liberty - he was a poet, not an automaton!"

After some further work, I looked up again. "It seems more organized than before," I admitted, "but I still can't make it out."

He laughed. "Why, you do overcomplicate these things!" he said, "sometime try seeing the world a little more black and white. But I must be going!" and he left without another word. Of course when I looked back to my work, I quickly saw the amusing portrait that Keats had painted in this Ode, but I also caught a glimpse of his thoughts when he chose to immortalize this bird that even the most astute of literary critics could not have seen.

Can you uncover what is hidden in Keats' Ode to a Nightingale, and identify the poetic sentiment that Keats had his eye on when he depicted this bird?

1. The following is a copy of John Keats' Ode to a Nightingale (raw text) 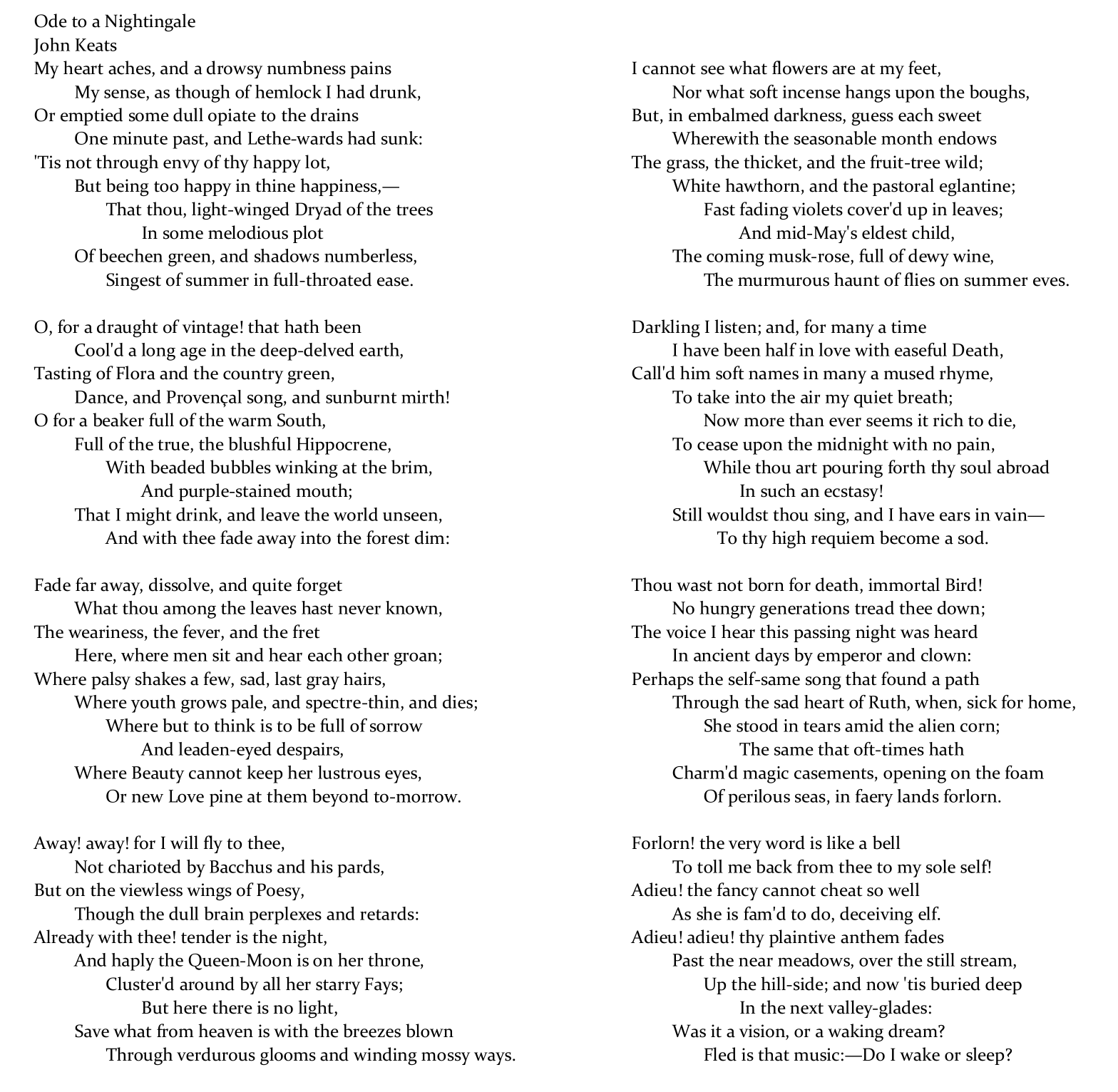 2. The following is a copy of Keats' unusual exercise discovered by this gentleman (raw text) 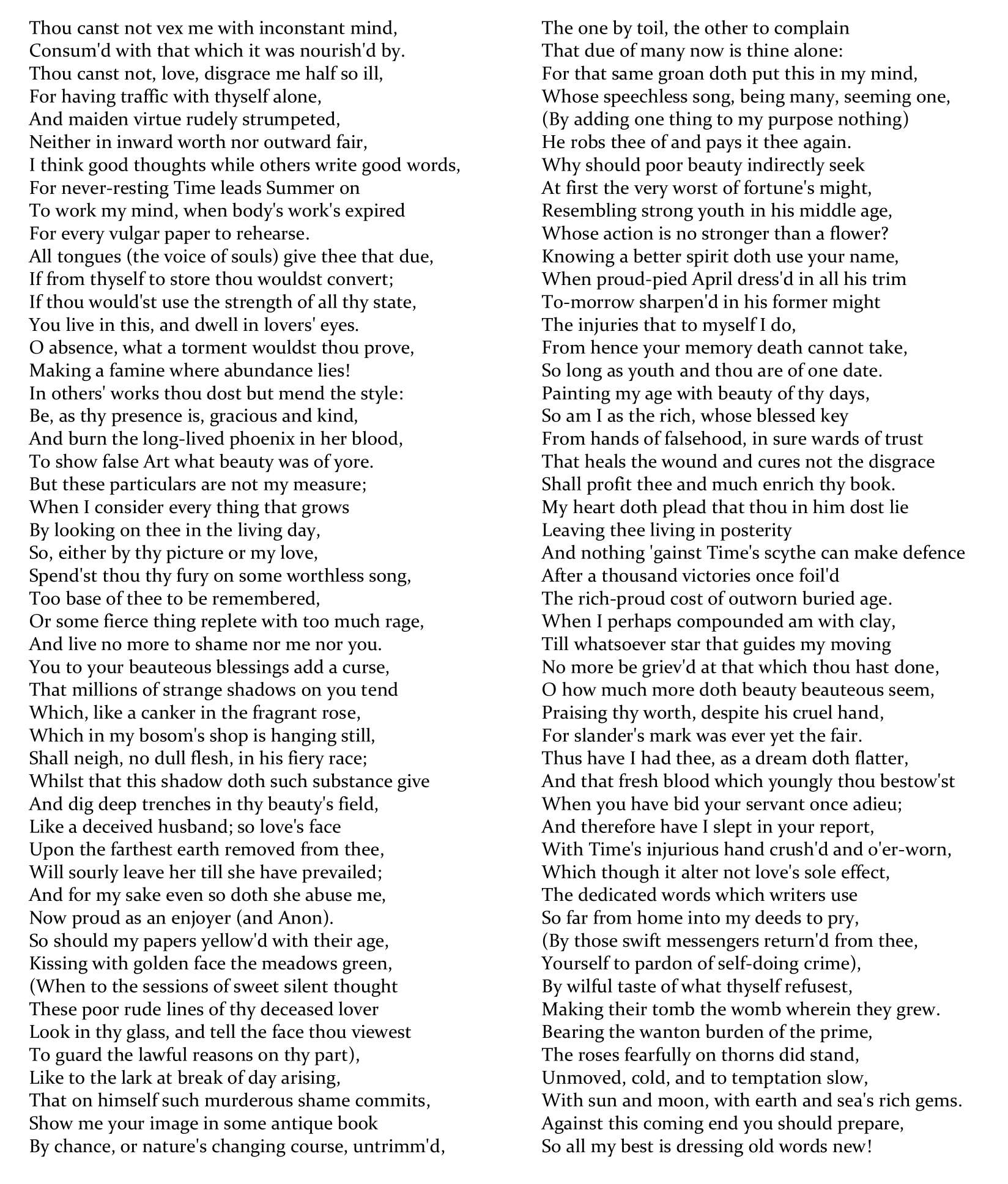 26
Reverse Puzzling 4
10
Let's help Sherlock, shall we?
12
The shrink and his patient (Part 1)
7
Ode to the heroes, vanquisher of puzzles
2
Help wanted, pretty please
15
Reverse Puzzling 5
6
HAPPY BIRTHDAY!
14
Twelve Labours - #06 Stymphalian Beards
3
Only one who sees without seeing can solve this riddle
1
RIP Puzzling! (#2)