Things were quite different in 3000 AD. We'd discovered other planets with sentient life for instance. Five to be precise. Adam, Bill, Carl, Dave, and Eric we called them, and we used the lately discovered instantaneon beams to communicate without delay across the vast distances between us. Light-speed communication was so last millenum. Of course there were the recreational 'radio' operators on each planet as well... they'd set up an instantaneon channel (Channel A) on which any signals on one of the light-speed channels (Channel B) were recorded by stations on each planet and broadcast instantaneously across the universe. Channel B stations on each planet recorded the signals on Channel A and broadcast them into the universe at light-speed.

One time we had a solar flare, and our silly Channel A station broadcast a blip accidentally across the universe. Some time later (I don't recall how long), the Channel B recordings of that blip started coming in as five bleeps from our five friends, at intervals (surprisingly enough) of exactly a year.

Later, Eric's star supernovaed. It kind of sucked knowing that an entire planet got wiped out like that, but life continued on. Adam, Bill, Carl and Dave became our best friends in the sky; from anywhere on earth you could look out and see at least one of them.

Anyway, later we had another solar flare and we sent out a blip on Channel A again, but this time we noticed something interesting. The blip of course came back to us on Channel A as well, from each station on Adam, Bill, Carl and Dave recording the resulting Channel B bleep from the other three. A certain period of time after the flare we heard a blip, and less than half that time later another one, but those 2 blips were all we got on Channel A. Some of the planets' stations must have received some of the Channel B bleeps at the same time.

Question: How far apart in time did we receive these two blips?

Assume no relative motion of the planets. Assume the galaxy is flat - all planets within it lie in a plane. Ignore any other blips or bleeps that might be generated in this situation - the only ones we are considering are the Channel B bleeps from the five planets in response to our Channel A blip, and for the second flare, the channel A blips resulting from the four planets' receipt of each of the other three's Channel B bleeps in response to our blip. Assume the stations' recording and broadcasting is instantaneous.

This is a mathematical puzzle, not a lateral thinking puzzle. There is nothing hidden in the text; interpreting the situation described in the puzzle at face value leads to a single unique solution. I believe this mathematical problem is interesting as a puzzle because it seems (I think) quite surprising that a unique solution exists given the limited data. While it is entirely possible to solve this puzzle by hand (I did - the underlying mathematical problem is one I once formulated to myself as a puzzle and solved by hand; I thought it might be interesting dressed up in the form of this story), there is some work involved, for which computer assistance is allowable. An exact expression for the answer is preferred. 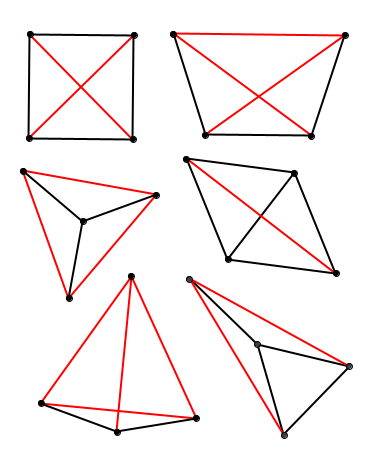 Not the answer you're looking for? Browse other questions tagged mathematics story calculation-puzzle geometry or ask your own question.

24
Four points with only two distances

10
Ernie and the Mystery of Madame Mu
4
The First Interplanetary Arithmetic Summit
30
Bill the Conspiracy Theorist
8
The FBI called... again
15
Ernie and the Slow Glass Solution
7
Ernie and the Mastermind
15
Ernie and the Optical Gyroscopes
10
Pirate Puzzle Double Twist
6
Hack of the International Stamped Time Server
5
The Binomial Elks Club