Uncle Nestor is a renowned global traveller, and can never stay focused on the one thing for too long. In an attempt to pass the time through the current global travel restrictions, Nestor thought it would be a great idea to construct a crossword of all the countries he's visited. The trouble with Nestor is that he loses focus very quickly, and gave up writing clues after 9 across. "Well", he said, "they're all countries, so it shouldn't be too hard. Besides, I'm too busy planning my next trip. As a bonus, once solved you'll be able to rearrange the letters in the coloured squares to find the next five countries on my global itinerary. Once the travel restrictions are lifted, of course". 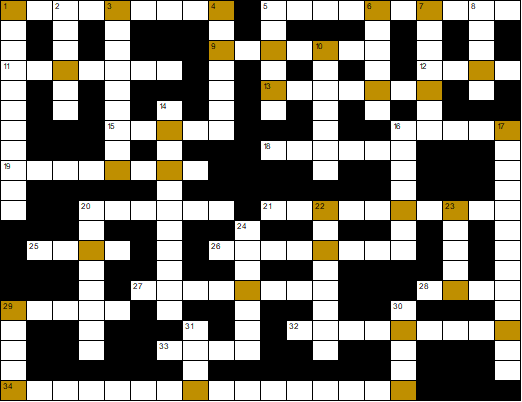 So, what are the next five countries on Uncle Nestor's itinerary?

The completed crossword is: 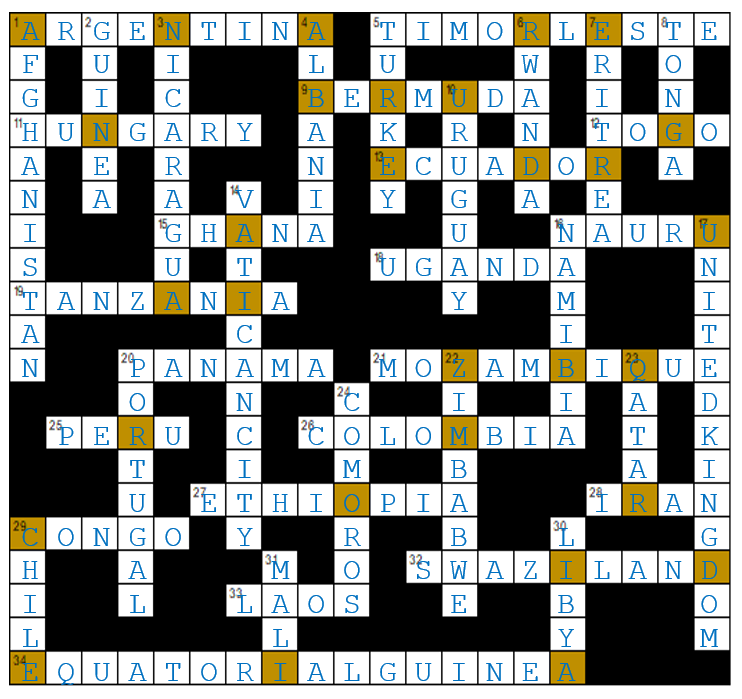 This was quite a challenge, especially since BERMUDA is not technically a sovereign state (and so didn't cross my mind for a looong time - see final spoiler block for explanation), SWAZILAND has recently been renamed eSWATINI, and CONGO is used here as an abbreviation for the more official REPUBLIC OF CONGO (which usually differentiates it from the Democratic Republic of Congo...). Also note that PANAMA in 20 across could equally be POLAND. Aside from that, I actually found it easiest to solve from the top-left (via 1 across) and bottom-right corners first, rather than solving all three of the provided clues straight away!

The gold squares then yield up the letters:

...which after a little bit of tinkering, will anagram to:

EDIT: An additional note on my solving process, if interested:

For completeness, I probably should say that:

- The first clue I worked out was 1 across: 'AN E RATING' is an anagram of ARGENTINA, whose football team won the men's World Cup in both 1978 and 1986. This then led to some easy deductions for NICARAGUA, AFGHANISTAN, GUINEA, HUNGARY and TANZANIA, and I was able to expand out as far as ETHIOPIA with some trial and error.

- 9 across fell into place once I had more letters in the name (BERMUDA is connected to 'mystery' through the many stories about ships and aircraft disappearing in the Bermuda Triangle). As stated above, I hadn't initially considered this a 'country' (since it's technically a British Overseas Territory), but tomayto-tomarto - it just took a lot longer to click for me.

- As for 5 across, both 'TIMOR' and 'LESTE' mean 'East' (in Malay and Portuguese respectively), but this fact about 'TIMOR' was not something I previously knew, so again I ended up fitting it only after placing more letters from my work in the bottom-right corner, where there are only 2 common countries with 13-letter names: UNITED KINGDOM and LIECHTENSTEIN. Using the latter would require BANGLADESH in 21 across, but then there aren't really any common 8-letter countries beginning with 'N' that would fit 22 down. Proof by contradiction: UK it was, then. The rest followed from some repeated trial and error, through MOZAMBIQUE, QATAR, IRAN, ZIMBABWE and so on...

- The final countries to fit for me were CONGO, PORTUGAL, PERU and PANAMA. I had CHINA in CONGO's place for a long time, but nothing was fitting with it. That was the moment when I realised I had to expand my search from the mental list of short-form names of sovereign states I've acquired from the ten years of my life I lost to Sporcle...! Finally, all solved!