I found some logic puzzles on someone's blog from a few years ago, and have been trying to solve them. Here's the link to the page: https://hedgehogcomms.blogspot.com/2015/04/puzzling-over-logic-problems.html

The final problem on the page is really, really tough, and I can't figure it out. Any help would be awesome! 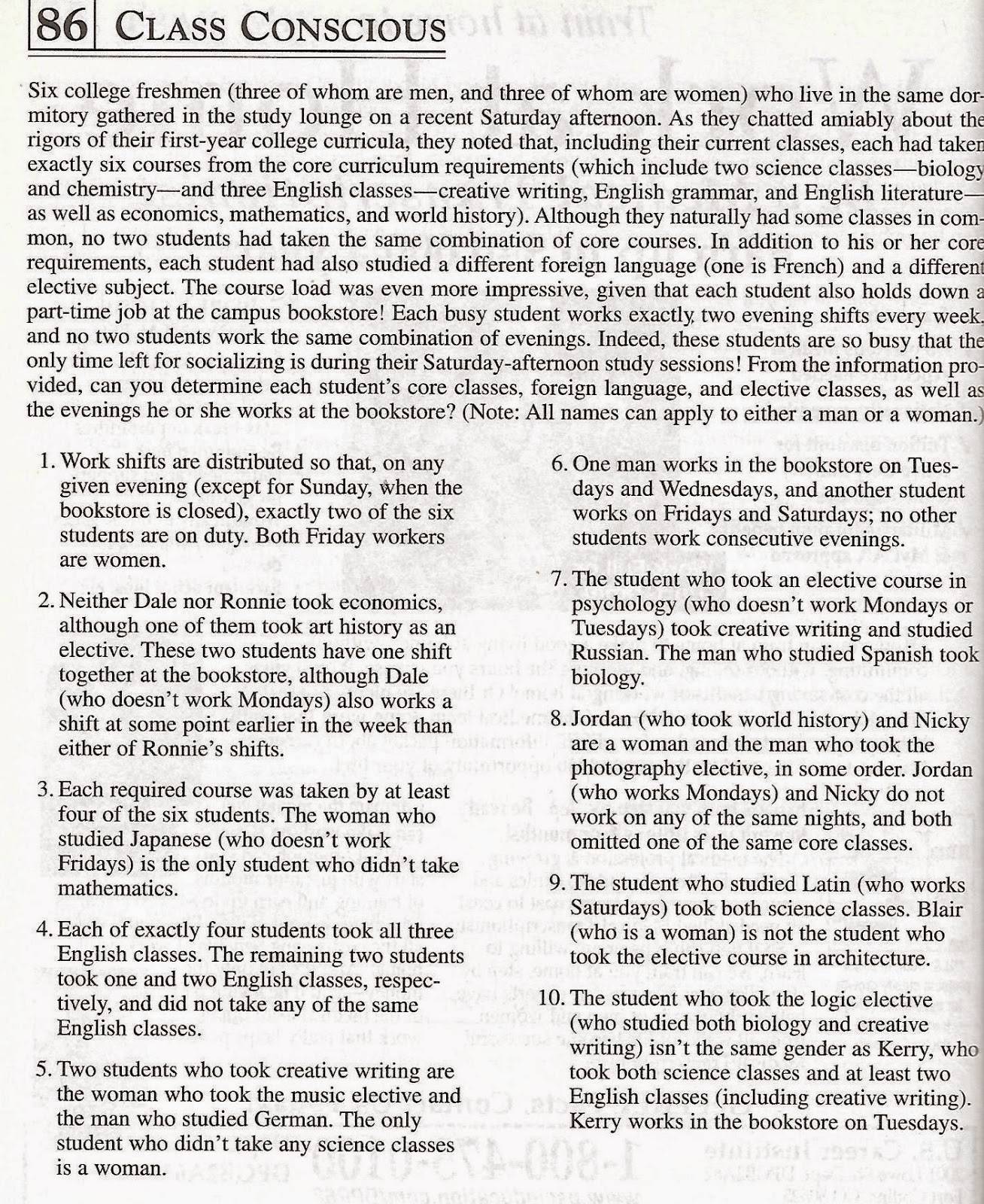 This is a rather difficult logic problem. In my opinion, it should only be attempted by those who have already mastered solving at least intermediate-level logic problems (such as, for example, puzzles rated 3 out of 5 stars). Furthermore, the explanation of the solution to this problem is extremely complicated, and so studying it is probably not of much use to novice logic puzzle solvers.

Here is my path to the solution:

[¶ 1] First, it is helpful to make lists of all the various parameters. For example, a list of all the foreign languages that the students took consists of French, Japanese, German, Russian, Spanish, and Latin. Having such lists at hand helps you to find border cases of the type where something MUST be one of these, simply because all of the other items in the list can be ruled out for one reason or another.

[¶ 2] With this particular problem, it is helpful to step back and make some "big picture" conclusions before diving in and solving at the detailed level. In particular, we can make some big picture conclusions about the core courses right off that bat. To do so, look at the introduction (the part regarding core courses), clue 3, and clue 4. As explained in the introduction, there are 8 different core courses, and each of the six students took exactly six of these. Another useful way to think of this is that each student DID NOT take exactly two of the 8 core courses. This way of thinking will be significantly employed in this discussion. From the introduction, we know that the exact set of courses taken were different for each student (that is, put another way, there are no two students who DID NOT take the same two courses).

[¶ 3] The 6 students, considered together as a whole, took a total of 36 core courses (6 x 6). We have already been told enough to determine exactly how many times each course was taken. Each of the 8 core courses was taken at least 4 times (clue 3). Math was taken 5 times (clue 3 - only one student didn't take it). ALL of the 3 English classes were also taken 5 times each (clue 4 - 4 students took all of them, and the remaining two students took 1 and 2 of them, but with no overlap between them). This already adds up to 36: math x5, creative writing x5, English lit. x5, English grammar x5, biology x4, chemistry x4, economics x4, and world history x4. So we know that this is how many times each class was taken.

[¶ 4] Now let's compile all the information we know about who did NOT take which core classes. I will use shorthand of this type: "Dale ≠econ" means "Dale did not take economics."
Dale ≠econ (clue 2)
Ronnie ≠econ (clue 2)
the woman who took Japanese ≠math (clue 3)
one student ≠[2 English classes] (clue 4)
one student ≠[1 English class] (clue 4)
one woman ≠biol ≠chem (clue 5 - a woman did not take any science classes)

[¶ 5] From clue 8, we know that Jordan and Nicky both did not take the same class (that is, there is a class that both of them did not take). What class could this be? It can't be world history (clue 8 - Jordan took world history), math (clue 3 - only one student did not take math), economics (clue 2 - Dale and Ronnie both did not take economics, so therefore all the others did), or any English class (clue 4 - as we already determined, each English class was taken 5 times - and therefore NOT taken by only one student). So we can conclude that the class which both Jordan and Nicky did not take MUST have been either biology or chemistry.

[¶ 6] We already determined that biology and chemistry were both taken four times, and therefore were NOT taken two times each. So, we can conclude that the woman who did not take any science classes (from clue 5) MUST be either Jordan or Nicky (whichever of them is a woman - not yet known). If this woman were NOT Jordan or Nicky, then there would be a science course not taken by three students. But we know this is not the case. So, Jordan and Nicky, in some order, are a woman who took neither science class, and a man who did not take one of the science classes.

[¶ 8] Now we know some things about the 3 different women in the group. One of them is Blair, whose two classes not taken were both English classes. Another is either Jordan or Nicky (whichever of the two of them is a woman), who did not take both science classes. The third woman is the one who studied Japanese, and did not study math (clue 3). We know this third woman cannot be either of the first two, as we already know which two classes these first two women did not take, and math was not one of the omitted classes. For now, we know that this third woman is either Dale, Ronnie, or Kerry. We will narrow it down later.

[¶ 9] At this point, let's shift gears and start to think about the bookstore workweek. Start by considering the following clues. Both Friday workers are women (clue 1). The woman who did not take math does not work on Fridays (clue 3). From these clues, we know things about the two women who work on Friday. Of the three women mentioned in ¶ 8, the third of these (the one who studied Japanese but not math) did not work on Fridays, so the other two MUST have worked on Fridays. These are Blair and either Jordan or Nicky (whichever of the two is a woman).

[¶ 10] Now, consider a few more clues: Dale and Ronnie work together one day a week (clue 2). Dale's second day of work is earlier than this, but not Monday (clue 2). One student works on Fridays and Saturdays (clue 6). We know that the student who works on Fridays and Saturdays must be a woman (because both Friday workers are women). So let's think about which days are possible for Dale and Ronnie working together. Neither Dale nor Ronnie can be the women who work on Friday, because we already established that one is Blair and the other is either Jordan or Nicky. Furthermore, one of these Friday women also works Saturdays, so this also prevents Saturday from being the day both Dale and Ronnie work together (only two people work each day). Dale works without Ronnie EARLIER in the week than the two work together, but not Monday, so this can only be at earliest Tuesday, which means that Dale and Ronnie can only work together on Wednesday or Thursday. If the day they work together is Wednesday, the day Dale works alone must be Tuesday. But if the day they work together is Thursday, the day Dale works alone must STILL be Tuesday, because there is no person who works consecutively on Wednesday and Thursday (clue 6). So we can conclude that Dale must work on Tuesday. Furthermore, we know that Ronnie's second workday (without Dale) MUST be Saturday, because it cannot be Friday (already explained), and cannot be Wednesday or Thursday, as that would make it consecutive with Ronnie's other day, violating what we were told in clue 6.

[¶ 12] Clue 8 tells us that Jordan and Nicky do not work together on the same night. Look at what would happen if the Friday worker were Jordan, instead of Nicky. In that case, the Saturday worker must be Blair (because Jordan is already working Mon & Fri, so cannot be the Friday worker who also works on Saturday). That only leaves Wednesday and Thursday for Nicky (Nicky cannot work on Monday because it would be together with Jordan). But nobody works consecutively on Wednesday and Thursday, so this situation is impossible, and therefore Nicky must be the Friday worker, not Jordan. We now know that Nicky is a woman (clue 1), and so Jordan must be a man (clue 8).

[¶ 13] Now look at the second slot on Monday (the person who works with Jordan). This person cannot be Nicky (clue 8 - Jordan and Nicky do not work together), or Dale or Ronnie (clue 2 - Dale does not work Monday, and Ronnie only works later than Dale's first shift), or Kerry (clue 6 - nobody works consecutively on Monday and Tuesday). The only possibility is Blair. And this means that the person working on Saturday with Ronnie must be Nicky (the person who works both Friday and Saturday cannot be Blair, as her two slots are already filled). The table now looks like this:

[¶ 14] Now look at clue 9: the student who studied Latin, and works Saturdays, took both science classes. This must be Ronnie, as we already know that Nicky (the other Saturday worker) is the woman who took no science classes. Clue 7 tells us that the psychology student, who also studied Russian, does not work Mondays and Tuesdays. This cannot be Jordan, Blair, Kerry, or Dale (all of whom work on Monday or Tuesday) and cannot be Ronnie (who studied Latin). So it must be Nicky. Next, we know that the three women are Blair, Nicky, and the woman who studied Japanese. Ronnie studied Latin, so must be a man.

[¶ 16] We know the third woman (other than Blair and Nicky) studied Japanese and did not take math. In ¶ 8, we narrowed this person down to Dale, Ronnie, or Kerry. It cannot be Ronnie (¶ 14 - Ronnie is a man), and cannot be Dale (¶ 15 - Dale did not take economics and a science, so must have taken math). So we now know that this person must be Kerry. So the only gender we do not know is Dale. We have already identified the three women, so Dale must be a man. Furthermore, Dale must be the man who works on Tuesdays and Wednesdays (it cannot be Jordan or Ronnie, as they are already working on other days). We can now completely fill in the workweek table through a process of elimination:

[¶ 17] From clue 10, the student who studied logic isn't the same gender as Kerry, so must be a man. It is not Jordan (from clue 8 and ¶ 12, Jordan is the man who took photography). So it is either Dale or Ronnie. One of Dale or Ronnie took art history (clue 2), so we know the two electives these two took (art history and logic), but not yet in which order. We have already established that Jordan took photography, and Nicky took psychology (¶ 14). This leaves architecture and music. Blair did not take architecture (clue 9), so Blair took music, and Kerry took architecture.

[¶ 20] From clue 5, the man who studied German also took creative writing, so it is not Jordan (¶ 19 - he didn't take creative writing) and not Ronnie (¶ 14 - he studied Latin). So it must be Dale. And by a process of elimination, Jordan must be the man who studied Spanish (clue 7). That only leaves French, which must have been taken by the only remaining person: Blair.