At the crime scene of a murder 🔪

Someone has been murdered!

Eight suspects have been identified. The contents of their bags have been emptied to use as evidence and are listed below alongside their names.

Which one of them was the murderer? 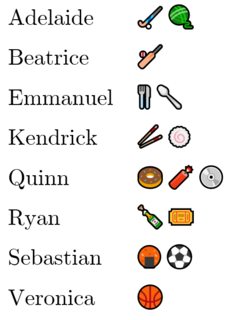 A letter arrived in the office this morning. The letter was written by someone claiming to be the murderer and they said they "have no re-morse."

In addition, the contents of all suspects' bags (including the murderer's own bag) were selected by the murderer as clues. Even the people chosen to gather were carefully selected based on their name.

It was discovered that the murderer left behind some notes they may have dropped. It seems like a list of first names sorted by the letter they start with. Eight names are circled, all of them being suspects.

When you figure out the intended solution, you will know for sure that it is correct.

We can solve this by:

for each of the eight suspects, adding the letter taken from the morse code of that person's bag contents to the first letter of the name of that person. For example, with Adelaide, we add A (the first letter of Adelaide) to D (from the corresponding 'dash dot dot' morse code which we get from visually converting the contents of Adelaide's bag). A (1) + D (4) = E (5).
Doing this for all 8 suspects, we get ECTRIEBA.

The bag items alone, when converted visually from morse code into letters, produces DAOGRMIE. This anagrams into IDEOGRAM, as was already pointed out by several other solvers herein. If we resort the letters of ECTRIEBA into the same order as we did with DAOGRMIE to get IDEOGRAM, it produces BEATRICE.

The first solution is wrong, but I am keeping it as a slight curiosity that the killer actually was escaping us till the third clue. The first 2 clues are fed to us so that we study them too deeply and hence find someone else as the killer. Ingenious!

Hint 1 is sufficient to point

The second hint corroborates this fact:

The second hint corroborates this fact. Ryan chooses the people based on their names such that everyone has re in morse in their name. And about the contents of the bag, I can see Ryan plans to celebrate and escape, but I am twisting facts to support my conclusion, which I shouldn't be doing, so let me see what else is here.

The murderer wants us to add or as we have seen concatenate somethings to see what is going on. As others have found out, concatenating the morse codes of the objects found in the bags of the suspects (treating circular objects as a dot and the others as dashes) allows us to spell IDEOGRAM as an anagram of the formed letters. And again we are led to pictures and by the pictures of Ryan's objects, we can see he's definitely cheery and wants to go somewhere. Why? Because Ryan's guilty? Let's see what else we have.

Phew! The new hint really is a slap to the face and tells us that not everything has deep meanings...

Hint 3 combined with everything else says :

The argument goes as follows:

the morse codes of the objects in the bags must be added to find out the murderer. Also that it might be an anagram is hinted at by the IDEOGRAM anagram.

The murderer has dropped a note, and the hint stresses on the letters the names start with. So, take the first letter of everyone's names. Then take the English equivalent of the morse code in the content of everyone's bag, and add them up. This gives us (ABEKQRSV)+(DAOGRMIE)=(ECTRIEBA) which is clearly an anagram of BEATRICE.

An attempt. I think

If we do that, then from top to bottom, we will get DAOGRMIE, which anagrams nicely to IDEOGRAM (which I think is intended because emojis are an example of ideograms), which was noted by @shoover and yours truly.

But that's not all. Consider the second hint as well.

I think the word "addition" was chosen to stand out because it hints concatenation. But what can we concatenate?

Then I realized that

We can do that to the names! First, we translate the names to Morse code. After doing so, we join up the dots and dashes into a single string.

And upon further observation,

We can see that a trend is fulfilled in most of the names. In each dot-dash string that represents a name, the Morse code symbol for the letter corresponding to that name can be found in the string.

To demonstrate (putting occurences of the letter in parentheses, plus other enclosing symbols if occurrences share a symbol),

We can see that not one Morse code G can be located in the string that represents Kendrick's name, and that is why I think Kendrick is the murderer.

P.S. I tried making the dots and dashes bold, but it did not make them stand out that much, which is why I used enclosing symbols instead. Apologies if it looks messy :/

The hint states: A letter arrived in the office this morning. The letter was written by someone claiming to be the murderer and he says he "has no re-morse." This could mean the murderer is male. The hint is also telling us to do something with morse code, but I am not sure what yet.

Not the answer you're looking for? Browse other questions tagged word enigmatic-puzzle cipher visual situation or ask your own question.

18
The untimely death of Dr. Wenzel: What give-away clue is hidden in the crime scene image?
22
Which teacher is the murderer?
4
The Cryptology Case
16
The Hyper-Modern Kidnapper: Crime Scene #1
13
Envisage the Answer
27
Who killed the indiscriminate warden?
36
Who killed Tom?
18
Another Sensational Crime Fiction?
12
Who murdered His Majesty the King?