Find The Common Pattern In These Words

You are a super spy, typing on your QWERTY keyboard, when suddenly you received an urgent call from your boss, Caesar. He had urgently called you, defying all protocols, as he wanted to inform you that you had been selected for a top mission which could very well alter the fate of humanity.

Your mission was to go to an ancient temple and extract the treasure stored there, the presence of which had been already confirmed, although the contents were still unknown.

All this happened in the past and you now are in that temple, trying to navigate your way. Suddenly, a trapdoor opens and you fall into it, waking up to see that you are in a room with no exit. On the wall front of you, there is a tablet with two lists of words:-

There was an inscription below the tablet. It read:

Find out in which list will be the word mist.

If you can successfully do so,

Luckily, you also have a gadget which will scan the room and give you a new clue within 26 hours from the previous one, although it is impossible to say how many clues it will be able to find until it starts malfunctioning and stops giving clues.

So, can you solve the riddle??

I'm a new and inexperienced member so any suggestions and edits are welcome.

All of the story merely contains 1-2 hints.

The criterion is not related to meaning or phonetics of the words.

https://imgur.com/a/lJ6bUmY This is the only part of the keyboard you need to consult.

There are a total of 3 keys at play, although one word uses only one key.

The keys for the cipher equals the number of letter keys in a row of QWERTY keyboard.

The words disobey, badge, yes, biased have the same key.

The words tomb, joust, bump have the same key, which is different from the key of the first line's words.

The word cite has a unique key, which is different from the keys of the above two word sets.

This is a partial answer. I'll add more as I go.

You are a super spy, typing on your QWERTY keyboard, when suddenly you received an urgent call from your boss, Caesar.

This is suggestive of a Caesar cipher where the keyboard layout changes the position of the characters.

Find a rule that always discriminates without error which word will go into which list. This seems to imply that it can't be something that would only garuntee placing "mist" given the occupied list. It must be a rule where I could rebuild the given lists from the collection of given words.

The inclusion of 'eye' might be suggesting that the letter 'i' is important, however both lists contain words with the letter 'i'.

Luckily, you also have a gadget which will scan the room and give you a new clue within 24 hours from the previous one, although it is impossible to say how many clues it will be able to find until it starts malfunctioning and stops giving clues.

If there is a Caesar cipher, maybe the number 24 is related to the shift.

All of the story merely contains 1-2 hints. This suggests to me that some of statements 'could' be interpreted as hints, but it'll depend on how you think about it. Hopefully I don't under or over interpret the story.

The criterion is not related to meaning or phonetics of the words. That rules out a lot, but leaves patterns of and about the words themselves, which may be intrinsic or extrinsic to the word. "mist has four letters, but four-letter words occur in both lists. I've also noted for letter composition of words that list 1 contains {'j', 'g', 'y', 'c'} which are not in list 2, and similarly list 2 contains {'q'} which is not in list 1. Also, "mist" is a noun, but both lists contain nouns.

The code has something to do with arrangement of keys on a QWERTY keyboard Okay, that verifies what I thought about the first sentence of the post.

I figure that there could be a Caesar cipher, which shifts the characters according to a modular arithmetic. One way of ordering the letters on the QWERTY keyboard would be be left-to-right-top-to-bottom. I'm kind of a visual person, so I'd imagine the map as a digraph from the original word to other strings where the edges are labelled by the shift. Here's an example for "disobey" (open in new tab for a better view): 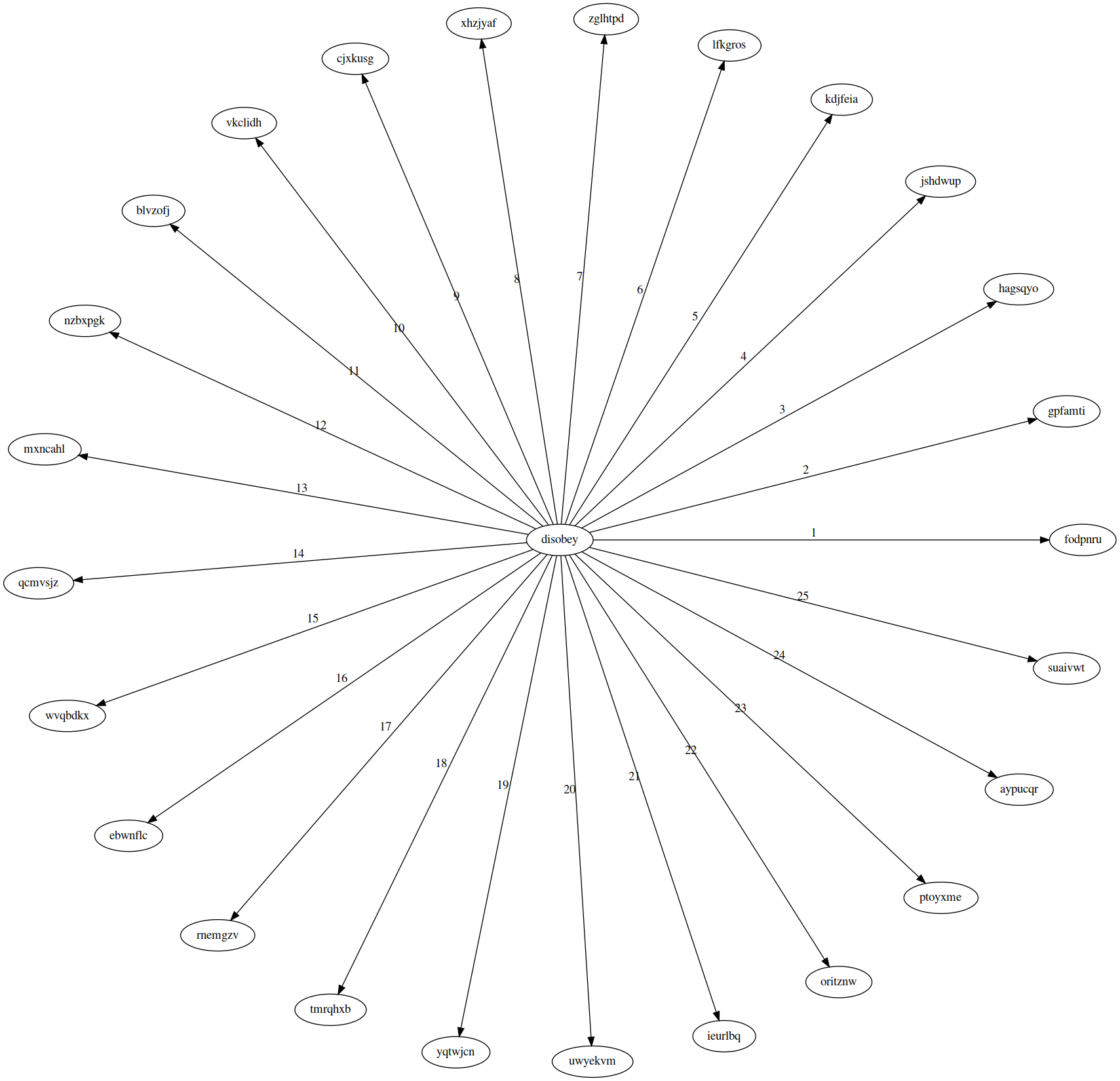 No human-readable words jump out at me, but maybe putting all the words from each list together into two graphs (one for each list) might show shared connections: 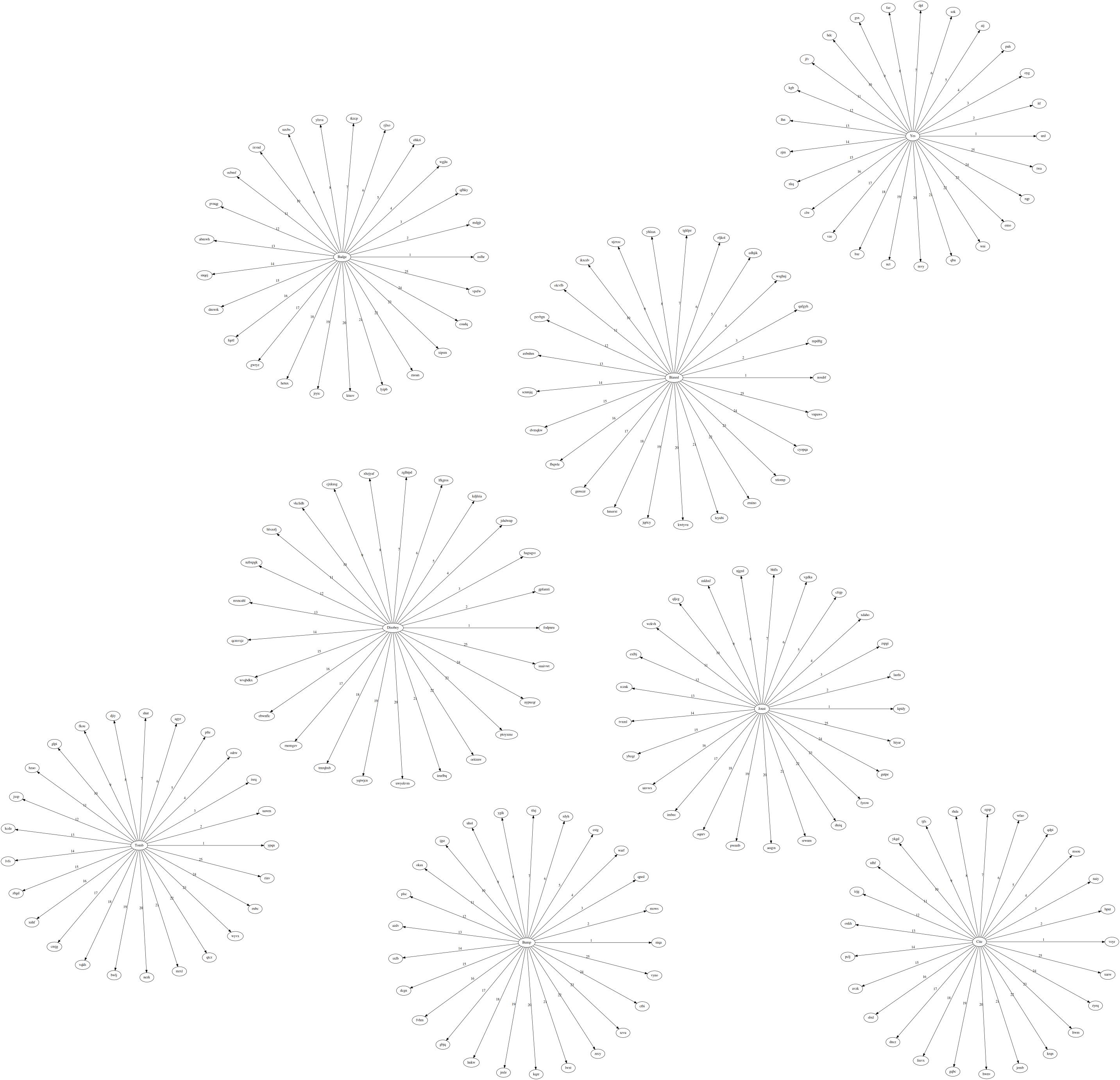 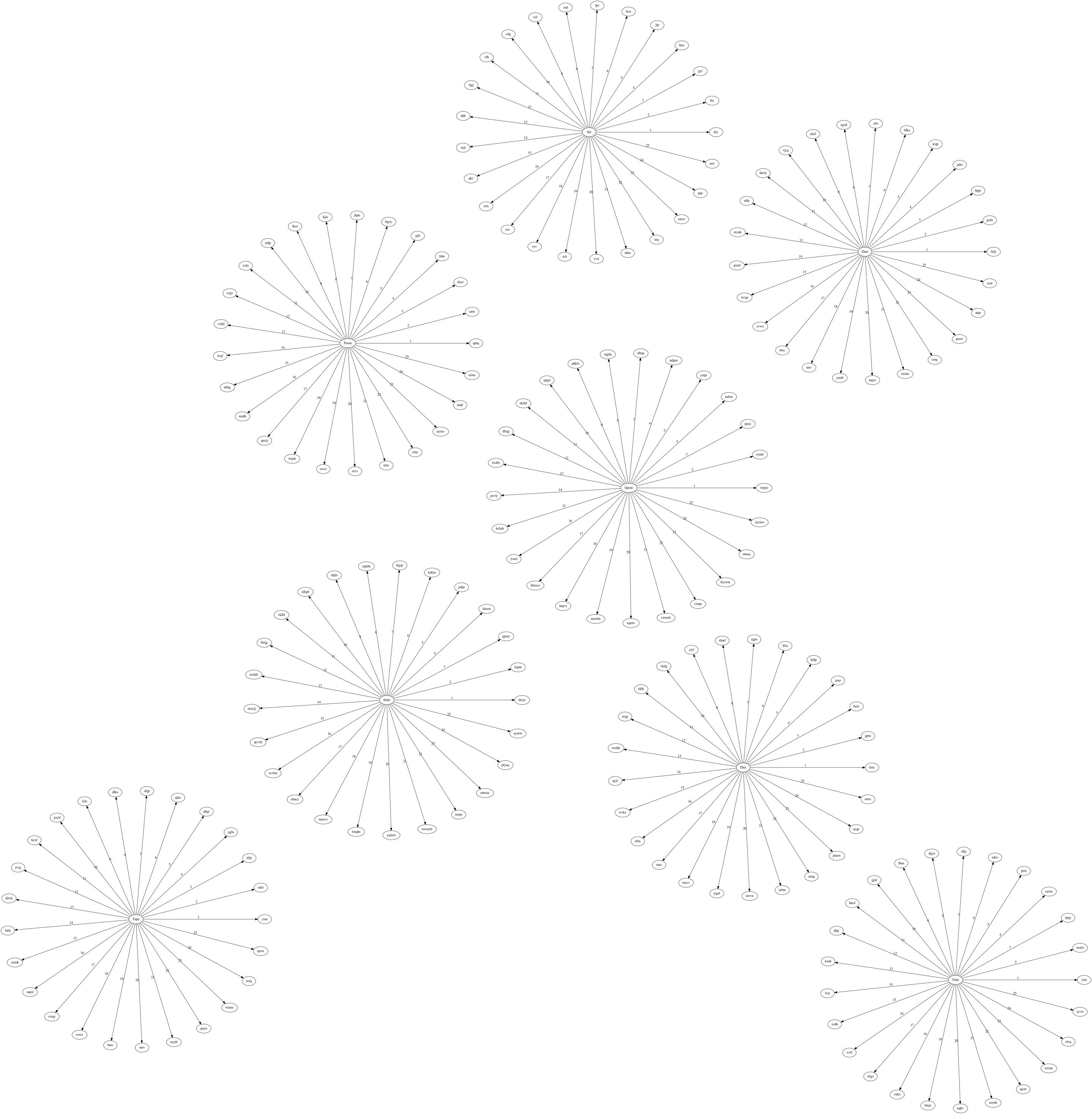 But as you can see, the words in each list do not map to any shared strings. Obvious in hindsight, but for some reason that seemed like a good way to think. I see that the cipher text words sometimes contain 'i', and sometimes don't. Maybe there are patterns in these ciphered words (that relate to eye/i), or maybe I don't have the right order to the keyboard.

The hint to use only the letters of the QWERTY keyboard was consistent with what I had done before, although in hindsight I didn't have a particular reason for assuming that I should use the letters-only part of the keyboard layout was due to the puzzle being in terms of words.

It is unclear if 'key' is meant to refer to the keys on a keyboard, or if this is a cipher that uses 3 keys in some fashion. Interestingly, the word 'eye' only has three letters in i, and was mentioned in the oringinal post. With 'e' being the fifth character of the standard alphabet, and the 3rd letter of the QWERTYbet (sorry, I play with words) it gets me thinking about whether the key is related this pair of numbers. I can likewise wonder about 'y' being the 25th character of the alphabet, and the 6th character of the QWERTYbet. Ah, to be explicit, I am assuming that the QWERTbet = 'qwertyuiopasdfghjklzxcvbnm'. This hint could also just mean that there are 3 keys on the keyboard related to this puzzle.

Sorry to do this @Galen but I actually used an idea from your answer to change the 24 hour limit in my question. Although 24 was incidental to the question, the new number is actually related to the shift.

Perhaps the rule that separates words between list1 and list2 is not a single cipher, but perhaps rather that list1 can be made from a cipher that does not create list2, and that list2 can be made from a cipher that does not create list1. If that is the case, the question arises what strings are associated with the words in each list? Maybe words in a given list can only be created from shifts of specific numbers from a given three characters on the keyboard. If so, I assume I must be allowed mulple concatenations of the three characters used on the keyboard to allow for words of different length to be produced from them. But then again, if I have to check every permutation under multiple concatenations of each combination of 3 keys on the keyboard considering all possible shifts checked against each word of each list... I must be thinking about this the wrong way, there is a word that needs only one 'key'; if I have a bijection from one alphabet to another, then a single keyboard key won't generate words under Caesar cipher... Maybe Vigenère cipher...

I can't help but have a feeling thta 'eye' is important. On the qwertyboard, there are 3 steps from 'e' to 'y', and 3 steps from 'y' to 'e'. Maybe that's related to the shifts in the cipher. It is conceivable for there to be multiple shifts, but then there remains finding out when each shift would apply. Another thing about the wording here is 'raise', as if I should think about the cipher up-down each of their respective columns.

no-computers was added to the question, suggesting that checking a large number of cases is not necessary. I also just noted that humor was on this tag beforehand, but I didn't notice it. I'm hopeful that the answer to this riddle is the punchline to a joke. I'd like that.

As I noted with the set comparisons, specific characters are not shared. I was hoping to see something jump out at me, but I don't see anything interesting. I see a handful of contiguous collections of keys within each keyboard covering, but I also do not see anything between or within them. Nor has it occurred to me how to has to do with a Caesar cipher yet.

Character sequence in words as digraph 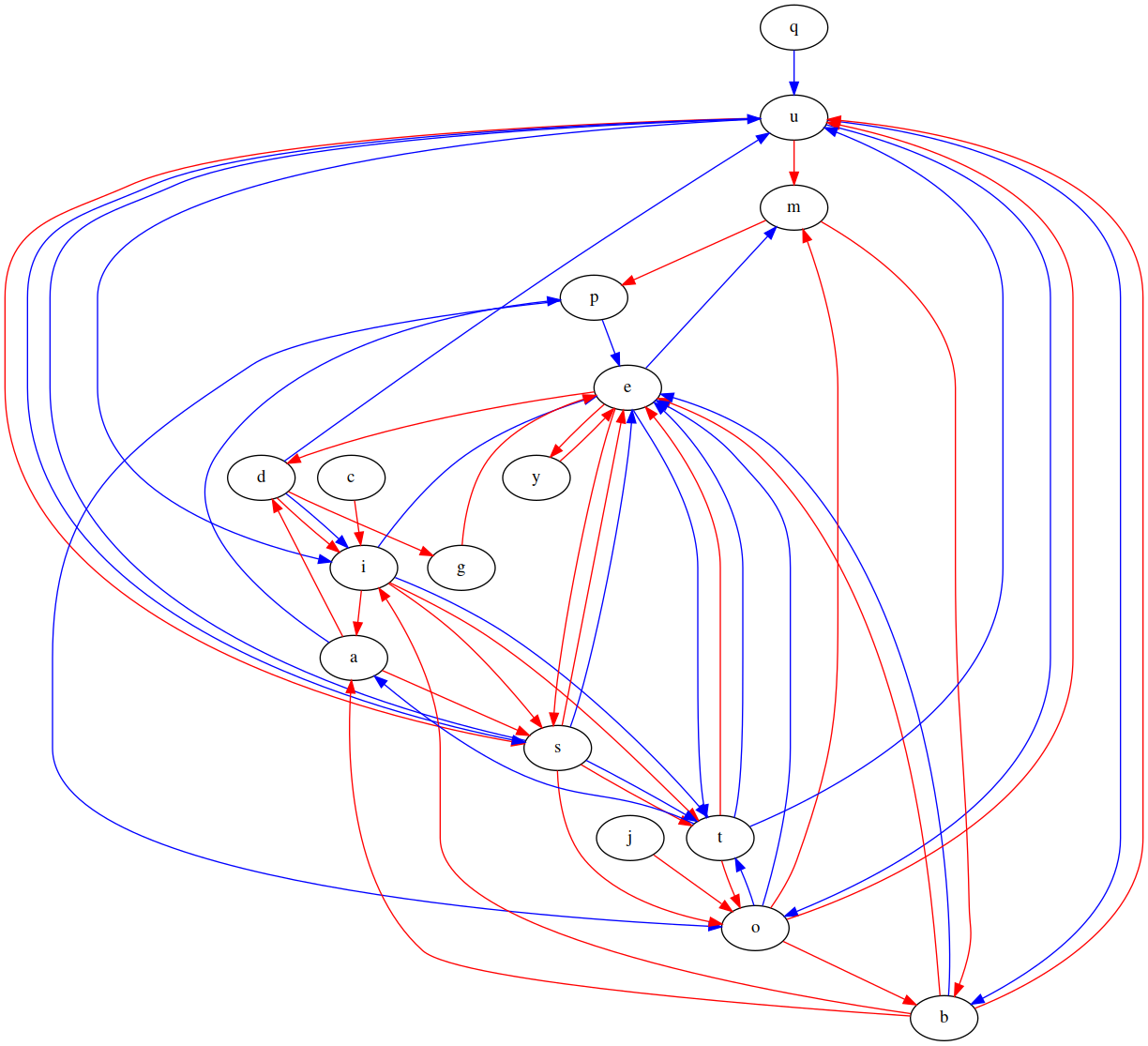 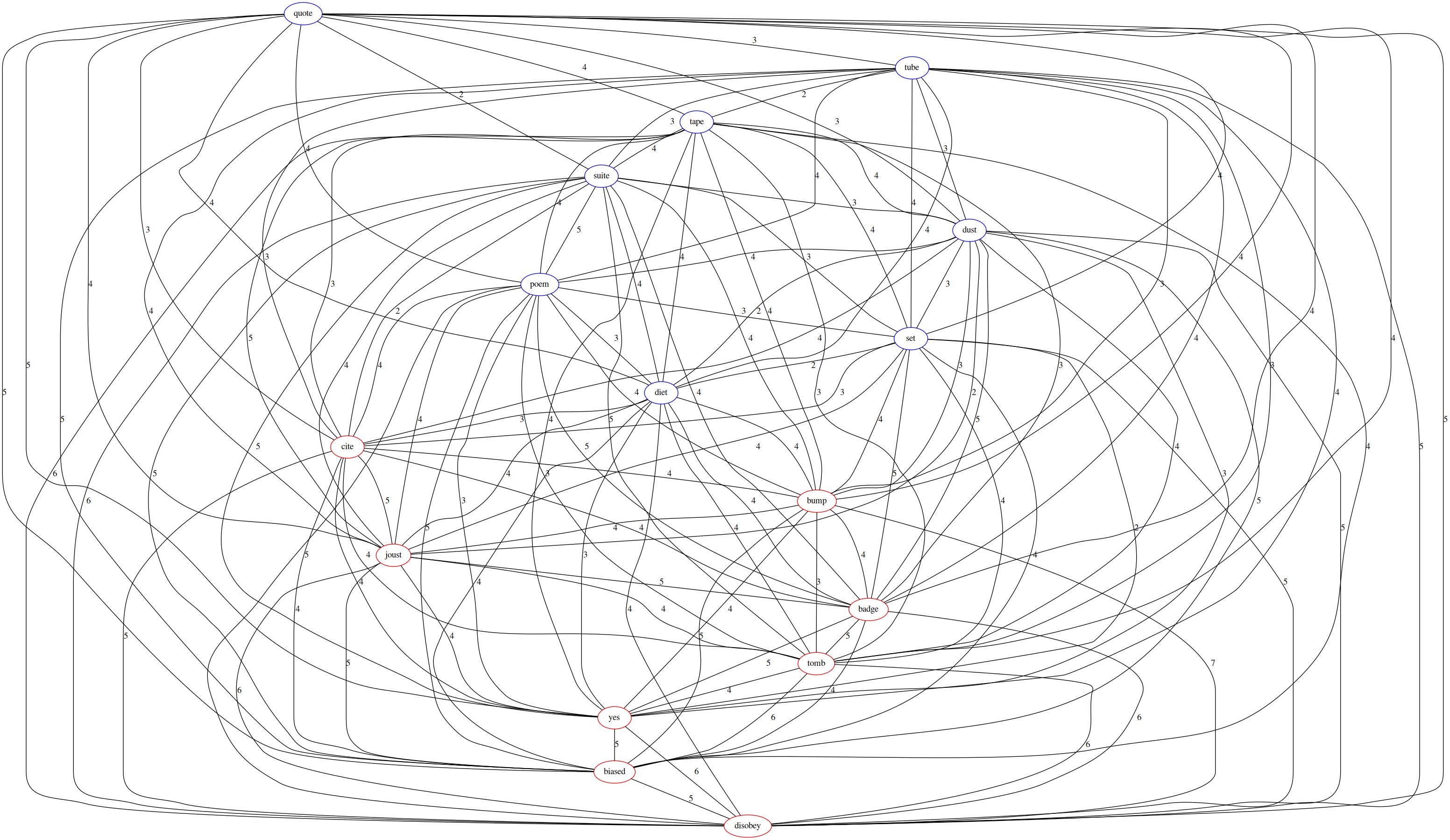 I know, the puzzle tells us that the semantics (meanings) of the words are not a consideration, but that didn't stop me from checking Wordnet to find out that the only two words that are cognitive synonyms (as far as the database was concerned) were the words quote and cite.

6
Can you cut through the mist?

5
Have You Tried Turning It Off And On Again? (Vigenere cipher)
17
Complete the tonal words
6
Can you cut through the mist?
15
What should these be called?
18
Can you solve this Rubik's cube from inside of it?
2
The mystery keyboard - what was the message?
15
The Cryptic Tower
7
A Grand Game (Find two words)
3
Help Alice and Bob find common interests