After the PSE lounge

Having solved the complaint at the PSE lounge, I leave the lounge and see a door I haven't noticed before. The door has a large sign. At the top it has a rhyme:

Rotations are red
Or are they blue?
One or the other
The choice, it is two

Are there no ends to rhymes in this place? Apparently not, as this is followed by another one:

Mostly a clue, is but a clue
One will just hint, what we should do
Rare is the need
Such more than lead
Exceptions occur, but they are few

Hmm. Pretty bad rhyme if you ask me.

Below this travesty is a picture: 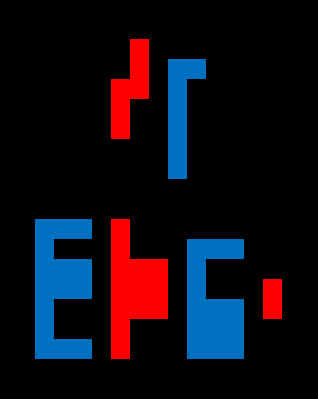 Seems to be abstract. Nice colors, though.

Under the picture is the sentence: Beware crimson pisces. I'm guessing they meant "pieces"?

Some kind of code?

Out of curiosity I try the door handle. Unfortunately, nothing happens. Seems the bloody thing is locked.

What sort of rotations are used on a daily basis here?

Another word for root is base.

The colors of the figures in the picture are a diversion. They could be any color.

The meaning of the "code" at the bottom of the sign should be clear for anyone who has tried a Density™ puzzle.

The final answer is:

This fits, as the text at the bottom of the sign that reads "FA: 9,7,7" represents FINAL ANSWER: 9,7,7 where the 9 and two 7's represent the lengths of the words which make it up.

To solve this, first consider the two poems. These provide some clues as to what is expected of us. Most notably:

1. In poem 1, the use of "the choice, it is two" conjures up the idea of binary. This is further emphasised by its acrostic spelling 'ROOT', which is a synonym of 'BASE' and suggests we should be looking at arithmetic in some base or other - binary is base 2.

2. In poem 2, the acrostic spells 'MORSE', which suggests we should also be utilising Morse code somehow.

3. Furthermore (coupled with the hints), the talk of 'Rotations' in poem 1 suggests the use of a Caesar shift at some point (like PSE's favourite, rot-13). Plus the emphasis on the colours 'red' and 'blue' indicate we may end up using their positions in the rainbow - 1 and 5, respectively.

Turning to the top half of the diagram:

Converting these to A1Z26, we now get:
HKZRRBB

We'll come back to this later...

Now for the bottom half of the diagram:

These are equivalent to the letters:
NUGZPUK

We now have two strings of letters - what do we do with them?

Well, recall the talk of 'rotations' from earlier, and the fact we have not yet used our colours and their rainbow positions... If we apply rot-1 ("rot-Red", perhaps) to the first and rot-5 ("rot-Blue") to the second, our strings become:

Using the anagram tag means these will rearrange to:

CLASSIC and PUZZLES, which conveniently fits two of the 7-letter words we expect to find in the final solution (which, recall, has format 9,7,7).

Lastly then, to find the remaining 9-letter word, note that we already had a set of 9 letters that might be 'anagrammable' - the two acrostics: ROOT and MORSE. These conveniently anagram to STOREROOM - and a storeroom of classic puzzles could very well be an appropriate room to lie beyond the PSE lounge!

Not the answer you're looking for? Browse other questions tagged enigmatic-puzzle steganography anagram or ask your own question.

31
What secret is this massive technical puzzle hiding? [riddles and data puzzles]
17
Some of our Professors are Missing
17
PSE Assessment Exam
30
Parallelisation
15
Puzzle Box: Spiral
17
a strange array
16
A sheet of graph paper and a code
22
Complaint at the PSE lounge
8
Back at the PSE headquarters
15
The Cryptic Tower