After here should I guess or is there a logic solution on Sudoku?

From this point is it necessary to guess or is it possible to find a logic solution? 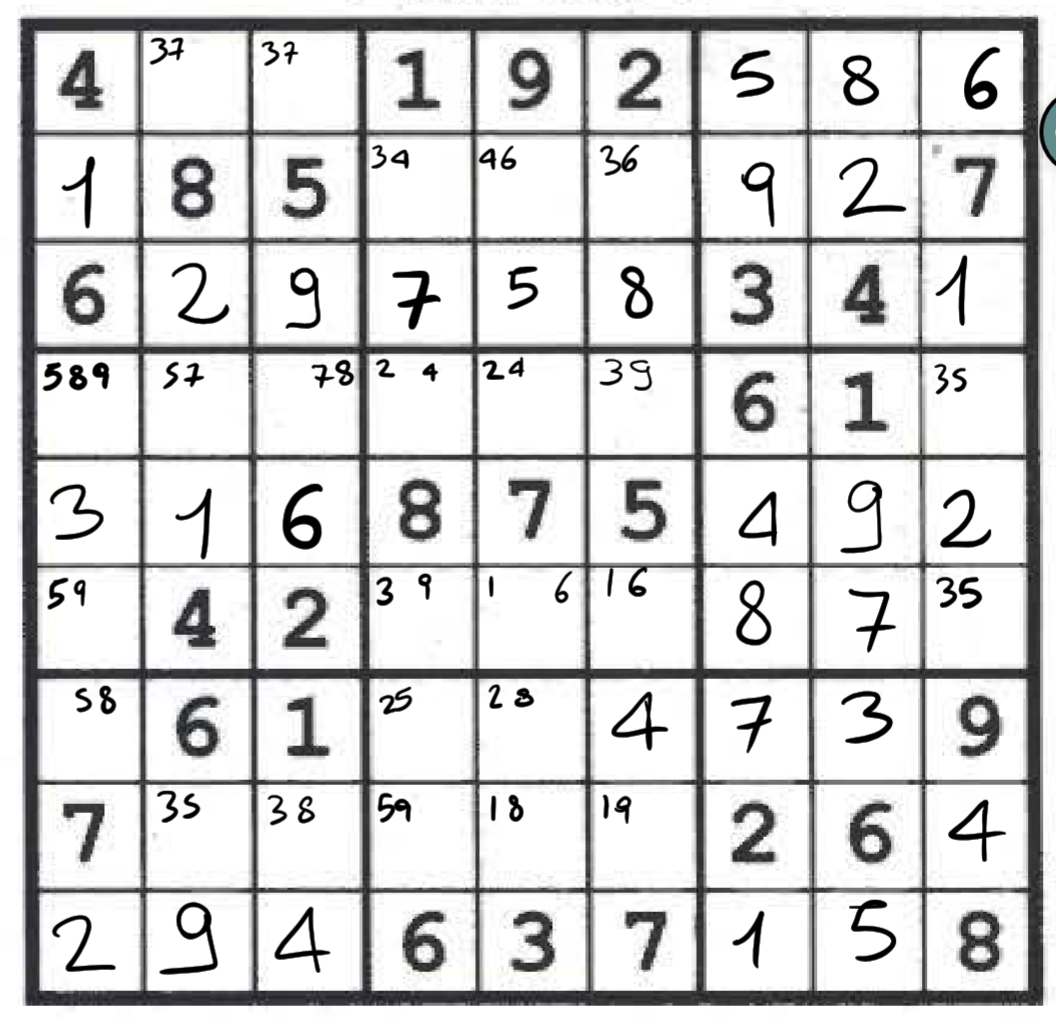 The short answer is

Yes there is a logical solution

However, it is a very complicated one

To solve this we need to use the 'BUG' principal.

A 'BUG' in Sudoku stands for 'Bi-value Universal Grave', which sounds scary. However all it means is that, for any given Sudoku, if there are two candidates in every remaining cell then there is not a unique solution. There is either no solutions, or 2 solutions.

As we can see in the above Sudoku, all cells contain two candidates, except one. This cell has 3 candidates and is in D1. This is an example of a 'BUG+1' where the grid is a BUG with one cell having three candidates. BUG+1s can be solved.

BUGs work on the assumption that there is a unique solution. For the problem, I checked by putting the sudoku seed into a solver which calculated the number of solutions as 1, so I knew this could be solved using BUGs

We need to look at the effect of removing one of the three candidates. One, and only one, of the candidates when removed will result in the rest of the grid having two candidates.

If we remove 5 from the candidates, we get:

So we don't have to look at the other candidates. To remove the BUG, D1 MUST be a 5.

And from there, there is a nice logical solution to the final answer, starting with removing 5 from the candidates in box 4, leaving two remaining possibilities. I can include it if needed.

Very tricky and advanced Sudoku this one! 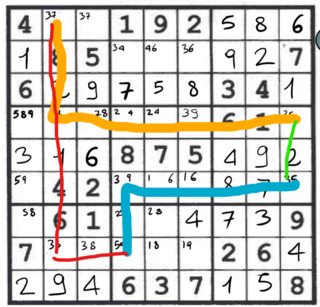 The currently highest voted solution is good, however BUGs require you to assume that the puzzle has only one solution, which is usually reasonable to assume, but this has drawn criticism from some. So, if that's you for some reason, I'll offer another non-BUG solution (with the help of my favorite Sudoku Solver).

So, what you're missing is this:

There is an XY-chain on row 7.

Column 1, Row 6 has only 2 possibilities.

Now, notice what happens to the middle box when we do this. It removes 9 as a possibility from the same exact square as before.

Thus, if both of our original square's only two options eliminate 9 as a possibility from the same square, than we can safely eliminate 9 from that square, since it will be eliminated regardless.

This, in turn, places a 3 in the center box, and it all just caves in from there.

If you don't like that, you can apparently use a 3D Medusa on it as well (at least, according to the tool I'm using) and solve the whole thing almost instantly (since most of the remaining squares only have 2 options). Though this is quite complex.

All of these strategies mentioned (including the BUG strategy) are labeled "Diabolical Strategies" or "Extreme Strategies" by my tool, meaning this is quite a hard puzzle. Don't feel too bad if you had trouble with it. Some people (like myself) have trouble finding the "Tough Strategies" (like a swordfish), which are probably considerably easier than all of the above strategies.

Not the answer you're looking for? Browse other questions tagged logical-deduction sudoku or ask your own question.

7
Techniques to Solve this Sudoku Puzzle
5
Is "meta"-logic valid for solving puzzles?
2
Logical Sudoku - How to tell when fully deducted?

7
Minimum steps to verify a Sudoku solution
7
'Companion Planting' Logic Puzzle - Is there an elegant solution?
4
Do I need to guess from here on this sudoku?
1
Stuck on this Sudoku puzzle. Please Explain the logic
7
Maximum number of disjoint clue-sets that determine the same Sudoku solution?
5
Sudoku Logic From Another Planet
6
Train Tracks: is there a unique solution?
2
Missing logic in sudoku puzzle
0
Which sudoku logic should I apply here?
0
Is there any sudoku logic on 6's?