When the managers of the Tampa Times and St. Pete Sun met for their annual company baseball game, everyone decided by unanimous vote that they wanted a different method of choosing which team bats first. Flipping a coin was just plain boring.

They came up with a much more fun way to decide. The players will line up and count-off alphabetically, and the first player who was counted with the initial letter of his first name would choose whether his team would bat first or not.

The players lined up and the captain of the Tampa Times team began.

To everyone's suprise, the counting went steadily on:

again and again, and nobody called out their own initial. After at least dozen rounds through the alphabet, they decided to get on with things, and just flip a coin after-all.

The coin was flipped and landed in the grass. Then suddenly, it began to storm! The game was postponed until next year. The coin was never recovered or looked at and the make-up of each team remained shrouded in mystery.

Being a game full of newspaper reporters, it was only a matter of time before the list of the eighteen player names was leaked. 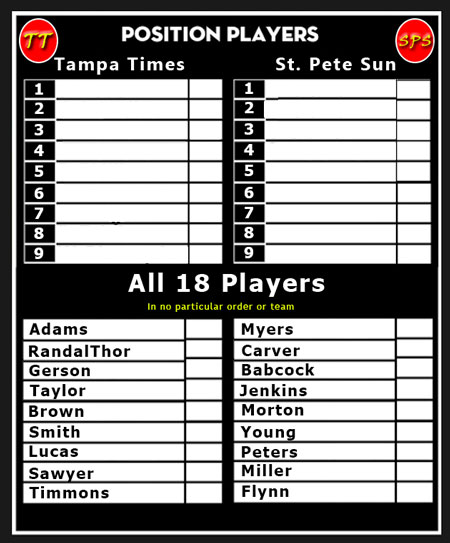 Who Plays For Which Team?

As written in the comments, we are missi g a key informations : how are the players counted?

The players from Tampa are

Babcock, Brown, Flynn, Jenkins, Lucas, RandalThor, Timmons, Taylor, Peters. All those who have a letter corresponding to an even number.

The players from St-Petes are

Adams, Carver, Gerson, Miller, Myers, Morton, Smith, Sawyer and Young. All those who have a letter corresponding to an odd number.

Not the answer you're looking for? Browse other questions tagged logical-deduction logic-grid algebra or ask your own question.