Ernie and the Chocolate Bomb

Last week when I visited Ernie he complained that his trousers had shrunk in the wash. I suggested an alternate possibility – he was putting on weight. So he decided to go on a diet and to support him, I agreed to diet with him. Of course, Ernie (who never does things by halves), organised most of the rest of his family to also diet, and calculated to the last calorie exactly what each person could eat based on their age, sex, size, and physical activity.

Ernie doesn’t believe in fads like the Paleo, Ketogenic, or Raw Food Diets – he claims that you should eat exactly what you want, but just limit the amount you eat. “Quality, not quantity, is the key", he said. So last week, when a new place called ‘The Globe’ opened, he invited me to meet him there for morning tea. “They have an interesting culinary idea”, he told me, “everything they serve is spherical”.

It seemed an odd idea, but the menu was appetising. The head waiter suggested that the Fetta and Rhubarb Muffin (spherical with 100 mm diameter) 900 cal. was a popular morning tea choice. “Sounds lovely", said Ernie, “but we are on diets – I can only have 300 calories this morning”. “And I can only eat 600, I added. But the waiter suggested we could share and called for the coupe-chef. “Not a problem”, the coupe-chef responded, “all coupe-chefs are trained in the art of cutting a sphere into two portions of any chosen ratio with a single cut”. And he sliced the muffin into two pieces. When Ernie checked our servings with his pocket calorie scanner it showed that the individual pieces were (to the nearest 0.1 calorie) 300.0 and 600.0 calories respectively – just as we had been promised.

The muffin was so good that we returned for lunch the next day with Ernie’s twin niece and nephew Maria and Mario. We all wanted the Veal and Oyster Loaf (spherical with 150 mm diameter) 2000 cal., but that was far too much for any one of us. “I couldn’t eat more than 200 calories”, Ernie told the waiter. “400 for me”, I told him, and Maria and Mario could eat 600 and 800 calories respectively. The waiter signalled for the coupe-chef. “Not a problem”, the coupe-chef responded, “any experienced coupe-chef is trained in the art of cutting a sphere into four portions of any chosen ratio with two cuts”. And he sliced the loaf into four pieces with two cuts (without moving the pieces between cuts). When Ernie checked our servings with his pocket calorie scanner it showed that the individual pieces were 200.0, 400.0, 600.0, and 600.0 calories respectively – just as we wanted.

News was getting around town about just how good The Globe was, but Ernie managed to get a booking for eight on Friday evening for him, me, the twins and the quadruplets (Bob, Rob, Jan and Sue). At the end of the meal we all wanted to share the Bombe au Chocolat (spherical with 200 mm diameter) 3600 cal., but of course there was a problem; between us we needed individual servings of 100, 200, 300, 400, 500, 600, 700, and 800 calories respectively (my share was to be 200 calories). When the coupe-chef arrived he was a little hesitant in his reply. “Very tricky”, he told us, “even for the best sous-chef. Let me think for a moment". And he pulled out a pad and pencils. After a few minutes of furious sketching, he told us that he had a solution but it wasn't quite perfect. "... but it will be very close”. And he sliced the bombe into eight pieces with three cuts (without, of course, moving the pieces between cuts). After the cutting, Ernie tested the pieces with his calorie scanner, said “let's eat”, and we did. As always, the food was exquisite.

I was sitting at the opposite end to Ernie at that meal so I couldn’t read the calorie counter and don’t know if I over-ate or under-ate. But Ernie told me afterwards that:

So can anyone tell me if I over-ate, or under-ate, and by how much? I don't know if it helps, but I did grab the coupe-chef's discarded sketch as I left the restaurant. 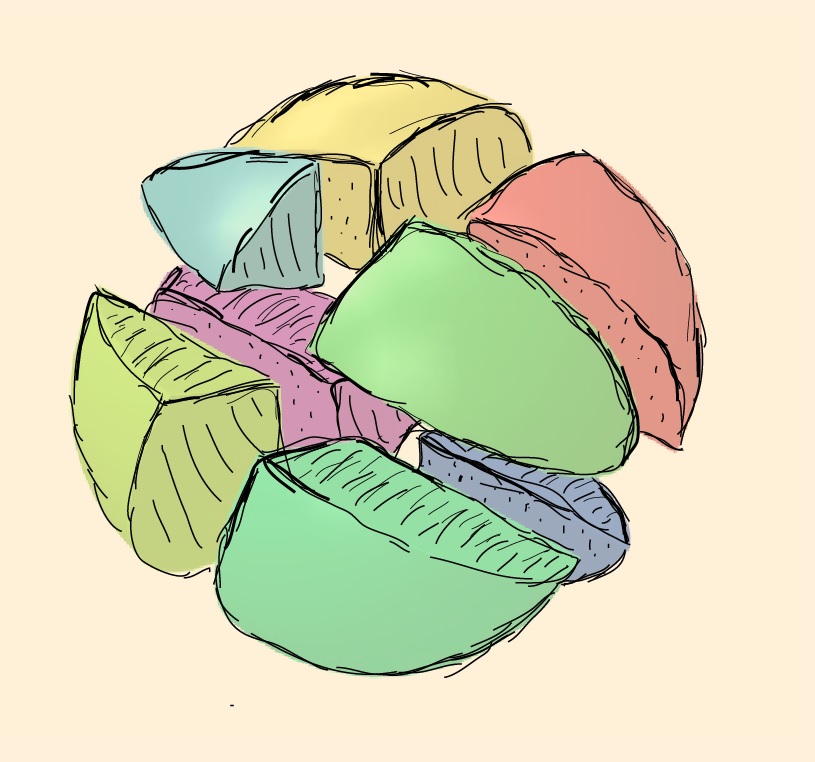 Best solution my computer could find:

since any pair occuring in the list of wedges above is by construction exact: If one element is off by $\epsilon$ the other must compensate by $-\epsilon$. Since all portions are connected the assertion is obtained.

With this solution portions are sized

overate by less than a permille.

Not the answer you're looking for? Browse other questions tagged calculation-puzzle geometry word-problem or ask your own question.