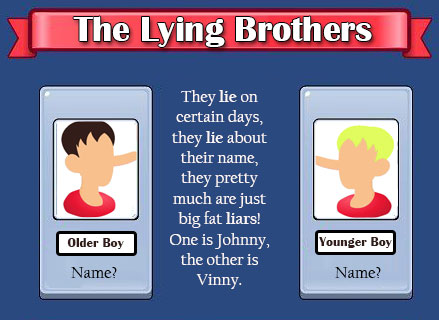 The little town of Stackville is exactly like hundreds of other little communities in every respect but one. Its scenery, its stores, its churches all have their counterparts at every crossroads in America, but as the home of the Morino boys the town is quite different.

These "remarkable" boys, Vinny and Johnny, exhibit, for reasons as yet entirely unknown, a very weird behavior when it comes to truth and falsehood.

Vinny is apparently incapable of telling the truth on Monday, Tuesday, or Wednesday, although he does so on the other days of the week.

His brother acts the same way, he finds it impossible to avoid lying on Tuesday, Thursday, or Saturday, although during the rest of the week it is impossible for him not to speak the truth.

When I heard of weird little kids on my recent visit to StackVille, I just had to meet them and see these lying little ba&^&!!*s for myself. So I found out their address, and dropped by. They were out playing in the yard.

"Hello," I said, "What's your name?" "I'm Vinny," replied the older without hesitation.

"What day is it today?" I asked next, feeling like a TV psychologist. "Well yesterday was Sunday," said the older boy. "And tomorrow is Friday," his brother added.

"Wait a minute," I said to the latter, "that doesn't sound right. Are you sure you're telling the truth?" "I always tell the truth on Wednesdays," he replied.

What's the names of the boys?

What day did this meeting take place?

(there are dozens of truth puzzles like this, I hope you enjoy another one )

I would say that

The elder brother is Johnny and the younger is Vinny, and the day is Tuesday.

Assume the elder brother, when saying he is Vinny, is telling the truth. Thus, it cannot be Monday, Tuesday, or Wednesday; those are the days Vinny lies. But then in the next statement, the elder says that yesterday was Sunday. Again, assuming that this is a "truth day" for Vinny, yesterday must in fact be Sunday so today would be Monday. But that is a paradox, as Monday is when Vinny lies -> Vinny cannot be the elder, so Johnny is. So we know that Johnny is the oldest, and because he lied about his name, it must be Tuesday, Thursday, or Saturday (his lying days). Any of those work with his (lying) statement about yesterday being Sunday. With Vinny saying 'tomorrow if Friday', that takes out Saturday leaving only Tuesday or Thursday. The last bit, about Vinny saying he always tells the truth on Wednesdays, which is a lie, points us to the day being Tuesday.

9
The two neighbouring islands
20
A Knight or a Knave stood at a fork in the road
17
Two brothers, two watches
6
Which of my friends has a birthday today?
3
Where’s my present?
19
On which day The Joker usually going on a date?
5
Probability of Girl or Boy
7
Don't put yourself out, dear
4
yes/no logic problem
4
Old Ladies Day Out