As brothers, these two are competitive in every aspect of life. Just check out some of my other puzzles, and you'll see my brothers in action.

Today is a classic Marble Battle! The brother's played a series of 3 games: 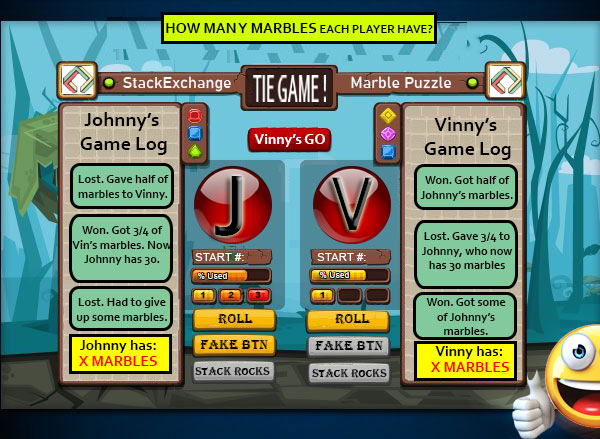 Note: Not a real game. Bored at work today, put our clip-art library to good use! :)

Round 1 Johnny and Vinny each had a certain number of playing marbles. Johnny lost a game to Vin and had to give Vin half of his marbles.

Round 2 In the second game, Vin lost and had to give three-fourths of his marbles to Johnny, who now had thirty marbles.

Round 3 Finally, the two finished their third game. Vinny won and acquired some of Johnny's marbles.

Score Board At this point, each brother had exactly the number of marbles he had started with, and Johnny had twice as many marbles as Vinny.

How many marbles did each have in the beginning?

Not the answer you're looking for? Browse other questions tagged mathematics logical-deduction algorithm algebra or ask your own question.

4
Which one is the lightest marble?
21
Emeralds bet - A round world
21
Edward and the seven imps' Game
18
The Djinni, the Marid and the Oracle (working title) :P
14
The know-it-all twins
15
Ernie and the Optical Gyroscopes
6
The Balls of Death
4
The Genius Bank Robber
9
Probability of picking the red marble twice
6
Balancing the marble game (Red marbles are OP, please nerf)