Let's say we have two cannons aimed directly at one another ( as my horrible attempt shown in the image ). 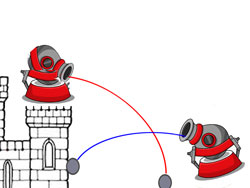 The Angles The cannon on top is aiming down towards the one on bottom right, and of course, the bottom one pointed upwards. They are pointed towards each other as exactly as can be.

Resistance It happens to be the calmest day in recorded history. There is no air resistance at all.

Coordinated Shots Let's assume both cannons are fired at the exact same time, exact same speed and power. Yes, aimed at each other.

Note: Before considering tagging this puzzle "too vague", or "not enough information provided", which is at first-glance a reasonable assumption - I just want to assure you that there is a consistent outcome.

Hint: Read up on this topic if you get stuck:

Good Luck. I'm looking forward to seeing some work written out. I have the answer fully documented when it's time to post it.

Alain Remillard has given the mathematician's answer. Here's the physicist's one:

assume gravity does not exist.

Obviously, in such a universe, regardless of their speed, the cannonballs will travel in a straight line and hit each other in the middle.

Assume "Step 1" does not exist.

A uniform gravity field will pull all masses at the same acceleration, regardless of the mass or its speed. So, if we let our coordinate system fall with the gravity, we have a situation that looks exactly like Step 1. (Except that the cannons and the ground seem to be "falling upwards".)

The cannonballs will collide unless they hit the ground before reaching each other.

Collide in mid air, exactly at the middle.

I did it mathematically

at the exact same position and they collide at the middle.

Not the answer you're looking for? Browse other questions tagged mathematics geometry algorithm physics algebra or ask your own question.