The Alchemist leaves a trail

I discovered the entrance to the secret passage in the first chapter of the Alchemist.

The stone-walled corridor curved to the right and downwards towards a source of light emanating from a chamber within. The softly lit chamber was roughly pentagonal and was possibly hand-hewn from the sandstone bedrock. The walls were covered in engravings that, to my mind, looked mystical and paganistic. A strong smell of sulphur penetrated the senses. On benches around the room were more unfamiliar apparatus, connected by angled pipes with collection vessels at various heights, like some crude distillery. And in pans over a bellowed stove (this at least would account for the second chimney coming from Hermes' roof, when I had only ever counted a single combustion stove) lay mixtures of what looked like gravel and soil, and in a small cast iron pot the most intriguing of discoveries: small gold pellets that looked like they had been melted and re-solidified. This was clearly a coveted den of protected secrets, and Hermes had been plying his trade.

On a solid stone bench in the centre of the room lay open a tome of drawings and notes, written in a spidery hand. I couldn't decide whether they were magic spells or incantations of alchemy. It made no sense to me. Next to this ancient book was a smaller, though no less tattered notebook, marked with a familiar symbol ☿. Ah, that was Hermes' mark. This notebook also contained scribblings and notes; becoming less and less coherent through the later pages. But the story was clear. Hermes was pursuing an elusive dream.

Each page told of further experiments, trials and error, failure after failure, until a final breakthrough. But just as the writing in his notebook became increasingly hard to decipher, the incoherent remarks borne out of an unseen paranoia increased: Watch Out! They are watching! Keep it hidden! Trust no one. Such were the phrases that littered the final pages of the notebook. Was someone after Hermes? Or was it Hermes' secret they were after? Who were 'they'? I had no clue.

I reached the final page in the journal. It was unlike the previous pages of experimental notes. A puzzle indeed. But as I glanced at the jumble of numbers and letters, two things started to become clear. This was written to me, and it was telling me exactly what I needed to do. And if I needed any further confirmation, underneath where the journal sat on the bench was a one way plane ticket….with my name on it.

This is the final page of the journal. All that I needed to learn of my destination was on this page. 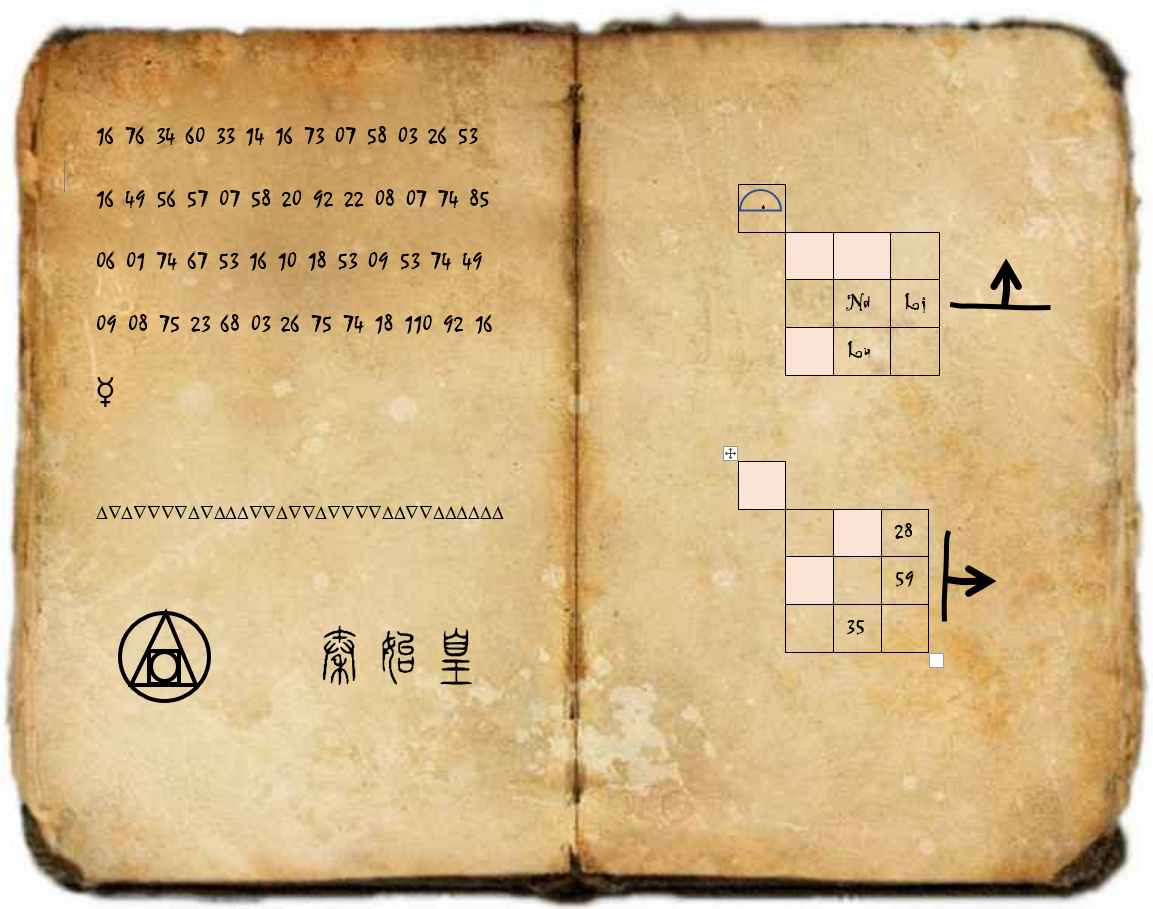 I transcribed all that I needed into my own notebook.

The other symbols on the page weren't necessary to understand Hermes' message, as well as telling me where and when I needed to go. They did provide some useful clues to help understand more of Hermes' workings.

What was Hermes' message? Where was I to go? When did I need to be there?

Edit; Well, that's embarrassing isn't it. I've just uploaded the corrected image for the last puzzle, which swapped the thick black arrows and has them now pointing in the correct directions. Apologies if that caused anyone to waste their time, although it may now be used as a clue. Lesson to self: never proof-read after your bedtime.

There are 3 parts to this puzzle.
Part 1 tells why (and has been mostly solved)
Part 2 tells when
Part 3 tells where

The date/time and location of where we need to go are:

The date can be solved by:

The location can be solved by:

solving the two magic squares, which produce latitude and longitude values. The magic square solutions are as follows:

producing a latitude and longitude of 37°49'26.0"N+120°45'21.0"E (the first magic square sums to 180, and the second to 120; for the latitude square, it is necessary to first convert the atomic symbols into the corresponding atomic numbers). This is the location of Penglai Pavilion, which is known as the landing place of the Eight Immortals from Chinese mythology.

The message (mostly solved by @BeastlyGerbil, but with a couple of minor errors corrected) is:

"SOS. Send Assistance. Life's in balance. Caution: watch who is near. If I win, forever life rewards us."

So the WHY to the puzzle is: immortality.

The numbers clue for chemical elements. Taking the symbol of those elements give:

The ☿ symbol is the symbol for Mercury (planet) but going with the elements theme, this might mean Hg

The first case gave ‘^¼À’ and the second case gave ‘¡rC?’ so I’m not sure if this is right

Not the answer you're looking for? Browse other questions tagged knowledge enigmatic-puzzle story or ask your own question.

167
Merlin and Hermes: Mysterious Lines
8
Puzzling puzzling phrases
8
A Mentor's Reassurance - The disturbed books
11
Birdies and Tigers and Bears, Oh My!
6
Journey to The Greatest Treasures of the Dungeons!
20
Away from the hub
9
What I Learned from the Attic
14
This is why I shouldn't leave my notebook out in my sleep
7
The Alchemist goes missing
4
Missing necklace