Here is a room composed of $10 \times 10$ squared cells. Each cell can be empty (𝑋) or contain one of the following:

All the mirrors reflect the light with an angle which is parallel to two room edges and perpendicular to the other two.

The numbers on the borders indicate how many different creatures must be visible along your line of sight if you step on one number and look directly into the grid from that position, along a row or column. Humans can be seen both directly and when reflected by a mirror while Vampires can be seen only directly. You can always see all the creatures along your line of sight, not just the first one. In reflections you can see Humans through Vampires.

Here is an example of how the reflections in the △ mirror work. 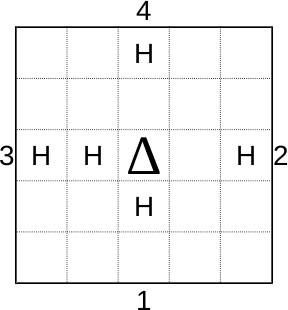 Complete the grid by filling each cell with one of 𝑋, 𝐻 or 𝑉 using the rules above and knowing that: 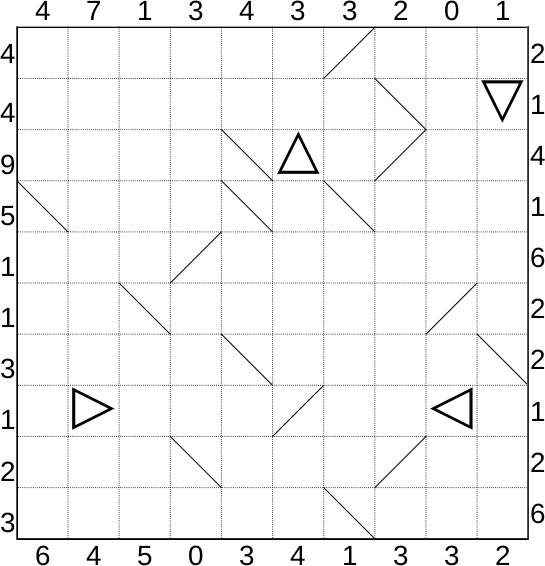 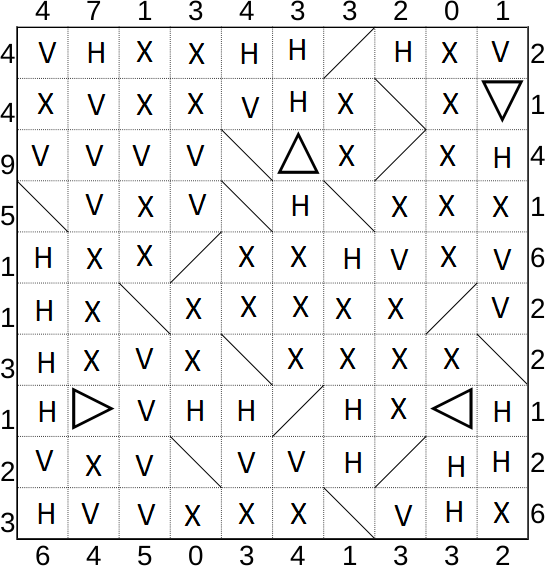 Any "line of sight" that goes directly from one number $p$ to another number $q$, bouncing off mirrors on the way, can be divided into (up to) three sections: (A) between $p$ and first mirror; (B) between mirrors (may be empty); (C) between last mirror and $q$. Anything in (B) counts equally for both $p$ and $q$, and so does any Human on the path. So the difference between $p$ and $q$ is precisely the difference between the number of Vampires in (A) and in (C).

First the "obvious" deductions, from the 0s and a couple of easy 1s: 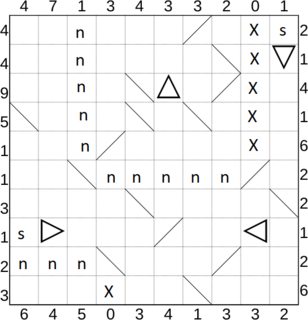 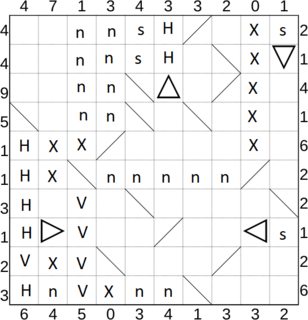 Now consider the $3,2$ path at the bottom right, and the paths around the top right triangle. 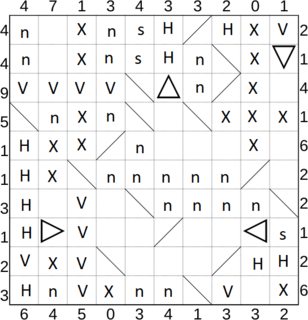 Now consider the top row, and the paths around the bottom right triangle. 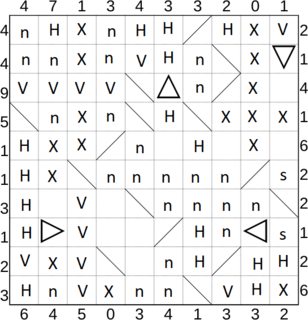 Let's also remember that the four central cells are empty, and consider again the $6$ on the right of the fifth row. 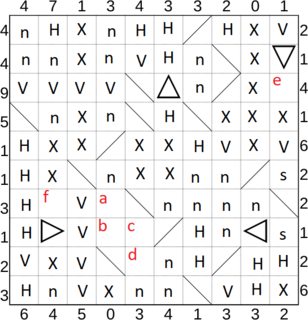 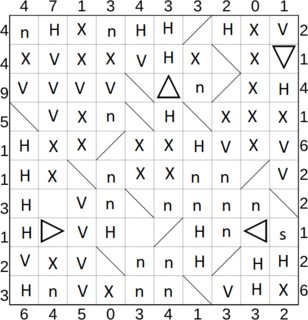 Now we're almost done, and deductions are falling like dominoes. I'm just making this pause for a breather between spoilertags.

Now we've filled all the $H$, and everything that can be deduced directly. I've emptied the $n$ squares so they stand out more clearly (there's nine of them): 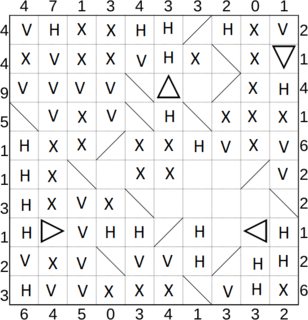 Finally, since there's 22 Vampires in total, every blank square must be $X$ and we get the final solution.

Not the answer you're looking for? Browse other questions tagged logical-deduction no-computers grid-deduction or ask your own question.

19
Three for the price of one
17
Karst - A variant of Cave
10
Imma Reflectin Mah Lazer!
6
Creatures from the Deep saw the heroes on a bridge
12
Humans, vampires and mirrors
11
Introducing: MIXXOX Grid Puzzle!
0
Concerning Tetrahedra
3
Vampires, Insanity and Transylvanian Sisters
3
Lasers: The Reflection (Level 2)
21
Stupendous Sponge