The following list has 32 elements. Element 8 and elements 22 to 32 are missing. Can you find why element 8 has been chosen to be missing? And can you find what are the missing elements?

I will regularly reveal some until someone finds the solution or only one remains!

This appears to be

a bizarre way of identifying chess pieces, in the starting position of the game.

the pieces are read out in diagonal lines, starting from the top left: 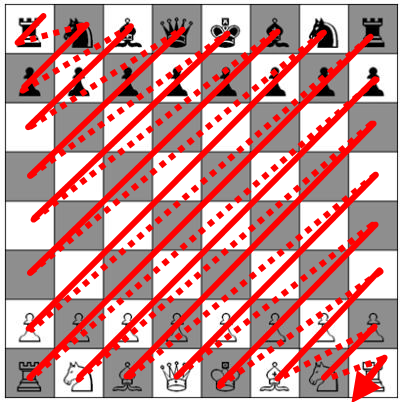 Number 8 is "GKKW", for the black³ k²ing¹ sitting on a w⁴hite square. Perhaps it was removed because "GK" is a unique string in the given pieces, and that would make it easier to identify the pattern that the pieces were taken in?

It appears that after piece 15, all the pawns have their first two characters swapped. I believe this to be a mistake, but there may be something I haven't figured out yet.

Not the answer you're looking for? Browse other questions tagged cryptography letter-sequence sequence or ask your own question.

3
Find the 9th and final letter in the list
12
Find the secret word in this encrypted image (part 2)
6
Not much to this one, once you've understood it
5
An n-segment sequence
27
BFTIODFTTWKBCSC
7
A simple “scientific test…”
3
Why is this sequence of images correct?
2
Find out the missing letters
5
Can you find the value of the question mark$\color{red}?$
7
2019 2-letters 33-length list