Triangle ABE is cut from square ABCD (centre E) and placed at one side. Restore the square by a single action different from the exact reversal of this transformation. A solution is to cut triangle BCF from the shape on the right and to use it to fill the gap AEB. Find an additional, completely different, way of cutting the shape on the right into two pieces that can be repositioned to form a square.

Source: https://thatsmaths.com/ where Peter Lynch records that Thane Plambeck got this problem from David Klarner who got it from N G de Bruijn. The ultimate source is unknown. 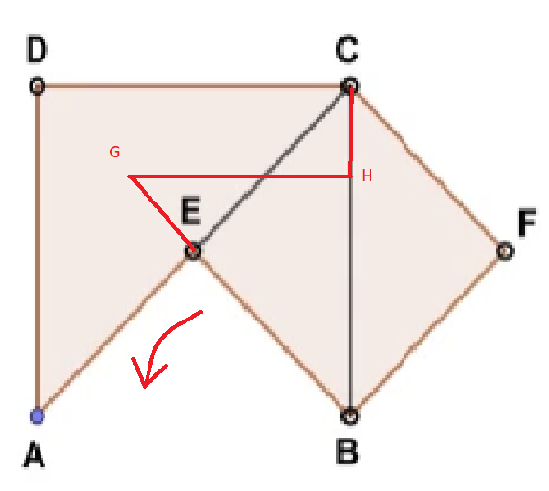 Some deduction that went into this answer

To create the original shape, the right angle at $B$ was split in half and moved. I figured that, in the new dissection, we should either preserve the right angle at $B$ and use it as one of the corners of the reassembled square or preserve the newly created right angle at $F$ to use as a square corner.
Because the line $BE$ extends all the way to $D$, I thought it would be easier to make a cut in this direction equal to the side length of the square (so that $B$ could be used as a corner).
With the angle $\angle DCF$ being $\frac{3 \pi}{4}$ it meant that the end point of the cut would have to be at $C$. This means that $F$ would end up part way along one of the sides and the fourth right angle for the square would have to appear from the cut at $C$. There would then have to be another right angle to join to the one at $F$ to form a straight edge. It didn't take too much playing around to see how all of this could be achieved.

Not the answer you're looking for? Browse other questions tagged dissection or ask your own question.