Untitled (Not Just a) Word Search

I wrote this for a puzzle swap, and I'm somewhat proud of how it turned out. I'd like to know what you think.

I've tried to minimize their existence, but words shorter than 5 letters are spurious.

The solution is a short phrase, you'll know it when you get it. Yes, there is more to this puzzle than the simple word search.

All words fall into a small number of distinct categories.

I want to add more tags but they are spoilery. I don't really know what I normally accepted on this site. Guidance?

Hint policy: I will be adding hints once every day.

Good job on solving the word search. The categories are your clues to proceed further, but you may have already guessed that. So I will say that two of the clues tell you what to do. One clue tells you how do to it. And the final clue tells you what to use it on.

I checked Wikipedia, and it looks like there are 18 quadrillion different Knight tours possible on an 8x8 board. So even if there was some hint telling you where to start (X marks the spot was clever, and I wish I had thought of that), I'd have to also specify where you go next approx 54 more times. Clearly, I'm not doing that, so how can I tell you which tour to use only using one of the hints?

The relevant hint is the group meaning "separated" or "disconnected." How can a knight's tour be separated from itself?

The actual root words for each of the four groups are "knight", "fake", "tour", and "uncrossed" 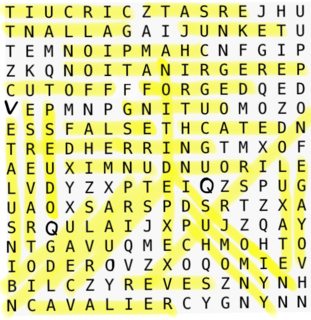 All the words in the word search:

Circuit, gallant, champion, peregrination, detach, round, sever, ersatz, unmix, outing
(credit Gareth for the last three, would never have even known that 'ersatz' was a word lol)

These words can be put under 4 distinct groups:

Knight (spotted by Rand and Gareth):

Also notice that 'round' can fit in both the knight and tour groups, which shows a connection.

What do we have to do? A knight's tour
How do we do it? Fake
What do we use it on? Uncrossed

i.e. - an 'uncrossed' knight's tour after removing the fake letters,

If we remove all the letters in the wordsearch which are part of a word (i.e. 'fake') we get left with exactly 64 letters, which just so happens to be the number of squares on a chessboard. So these letters can be re-arranged into a 8x8 grid:

So the next thing is to do

An 'uncrossed' knights tour. The 'uncrossed' tour leads us to the longest uncrossed tour on an 8x8 grid, via wikipedia: 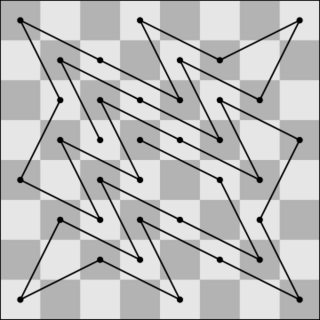 Applying this, and starting at the left hand starting point gives 'ONETIMEPADFJFFQMXQOPVXQNQJGVZZZZZZZZ'.

And a one-time pad is a type of vigenere cipher

So what next? (Huge credit to Lanny Strack here, who managed to work this out)

Using all the letters in the 8x8 grid that the knight doesn't pass over as the cipher-text:

Using a one time pad cipher we get the answer:

Not the answer you're looking for? Browse other questions tagged enigmatic-puzzle word-search or ask your own question.

// TODO sg: TMP solution until we are confident in our current implementation of async imports // once we are, we can move the if into the js entry file and dynamically load the mark obsolete module