Knights on a 5x5 chess board

What is the maximum number of knights that can be positioned on a $5\times5$ chess board, so that each knight attacks exactly two other knights?

To show that xnor's answer with 16 knights is indeed best possible, consider a standard black-and-white chessboard coloring so that the four corner squares, the central square and both diagonals are black. Then there are $13$ black and $12$ white squares. Consider $b$ knights on black squares and $w$ knights on white squares, so that each knight attacks exactly two other knights. Suppose for the sake of contradiction that $b+w\ge17$ holds.

xnor's answer is correct. Here is why: 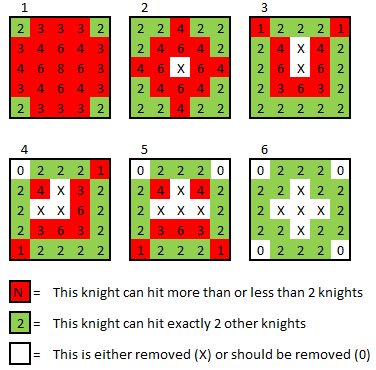 Every position has a number that corresponds with the amount of knights a knight can attack.

The best strategy is to remove the knight which can be attacked my most knights until every knight can only hit two other knights.