Inspired from the N-Queens problem, I here propose you a puzzle from Xiangqi wich is Chinese Chess equivalent, mostly played in Asia.

The most different piece from Xiangqi is the cannon. You can search for cannon here. Quoting from there:

Cannons move like chariots (or towers), any distance orthogonally without jumping, but can only capture by jumping a single piece, friend or foe, along the path of attack. The piece over which the cannon jumps is called the 炮臺 (trad.) / 炮台 (simp.) pào tái ("cannon platform" or "screen"). Any number of unoccupied spaces, including none, may exist between the cannon, screen, and the piece to be captured. Cannons can be exchanged for horses immediately from their starting positions.

An empty Xiangqi board is nextly shown: 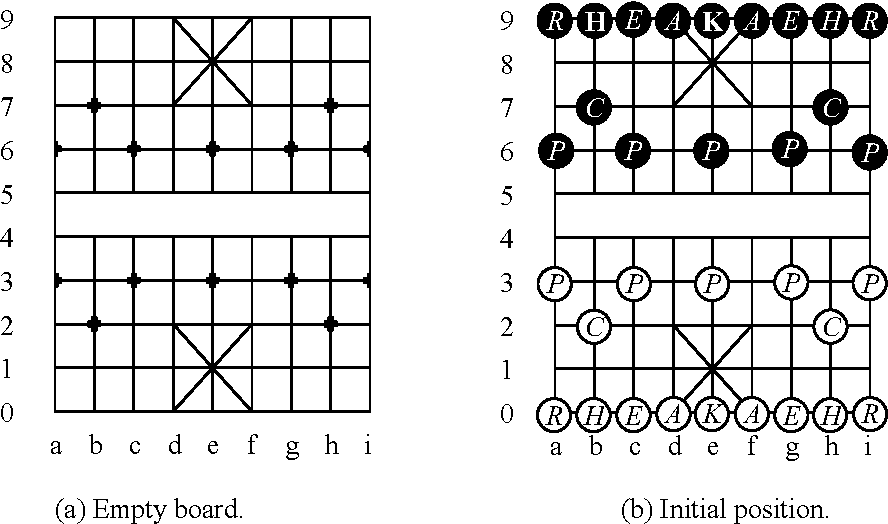 From an empty Xiangqi board and for $3\le k\le 5$, find the maximum and minimum, $M>0$ and $n>0$ numbers of cannons you can put, so that each cannon is threatened by exactly $k$ other cannons.

A red cannon can not threaten another red cannon. It only can threaten a cannon from opponent side (black side). You can have an idea of this note in this similar chess puzzle.

for $k>2$, the problem is impossible.

Take any possible configuration of cannons on the board. Consider the "top left" one (i.e. take all leftmost cannons, and if there's more than one in that column, consider the topmost). This cannon has nothing above it or to the left of it, so it must be attacking at most two other cannons (one below, one to the right).

Therefore it's impossible to have a configuration where every cannon is attacking at least three others.