The bus again, or is it a pen?

This image can be resolved to a single word. 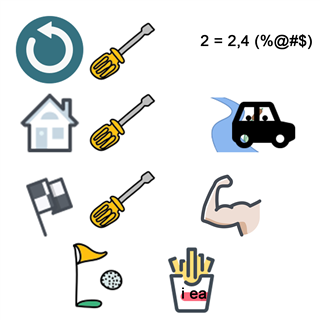 This puzzle takes on the format of another type of puzzle - tags?

Three things are broken! What do you have to fix them?

Another Yet Another Hint:

An extension of Hint 2: Riley conversion.

Each part of Hint 1 corresponds to one row of the rebus-riddle, but there's 1 extra...

Images were taken from https://icons8.com/.

The single-word answer seems to be

I get this from:

The infix is 'ford', shown by the brand of car Ford, and also fording a river.

The suffix is 'able', as in having ability, denoted by an image of a strong person.

As for the whole, it seems that the picture of French fries denotes a food item which is cheap, and therefore affordable. As noted by @Stiv, this may be related to the British phrase "cheap as chips". Furthermore, the vowels "i ea" on the carton may be what remains when the consonants "c-h-p" are removed from "chip cheap".

In the original hint, "derogatory" refers to the prefix (af, a derogatory term), "brand" to the infix (Ford, a brand of car), and "competent" to the suffix (a synonym for 'able'). "money" refers to the whole (affordable). As discovered by @Stiv, "backwards" refers to these clue words applying in reverse order to the four images on the right.

Finally, a shout out to @Stiv for sorting out the left-hand part of the image. To save all in one place for posterity, these are the parts of the puzzle that @Stiv figured out:

In the title, "bus again" refers to 'rebus', and "pen" refers to a Riley riddle ("Riley pen"). This puzzle is a Riley riddle using rebuses. The symbols on the left translate to 'prefix', 'infix', 'postfix' and 'whole', respectively, with 'fix' represented by the screwdriver, 'pre' by an arrow returning back, 'in' by an 'inn', 'post' by a checkered flag (denoting a 'post' in car racing, where flags are displayed), and 'whole' by a hole (homophone) in golf.

Not the answer you're looking for? Browse other questions tagged riddle visual rebus or ask your own question.

20
Which way is the bus going?
20
Rebus: Romance, Cats and a Pen
8
Bus Driver Bob's Dilemma
7
I bus, You bus, They bus, REBUS
3
Hear me call again, again
4
The Pen is Mightier than the Sword
10
The Pen and the Pocket
1
Color Logic...again
3
Find the missing brick, again