Pieces of paper without consecutivity condition

TL;DR: like this puzzle but with an arbitrary number of papers and without the condition that the papers chosen must be consecutive.

You are given $n$ pieces of paper, and you write down $n$ distinct natural numbers, any numbers you like, one on each piece of paper. Then the pieces of paper will be mixed up and laid upside down on the table in a random order. You are allowed to ask the sum of the numbers on any selection of the papers (they may be consecutive papers or not), even a selection of just one piece of paper if you wish.

What is the minimum number of questions you need to ask to know every single number in order?

You can get at most

one bit of information per piece of paper: "in" or "out". That is, if you've labelled your numbers perfectly, the most you can know from each result is whether each number is in your selected group.

This is possible to achieve:

So now we've reduced the problem to the variant where

instead of being told the sum, you are told which slips are in the group.

Once you've done that, you now have four categories! These are once again problems just like the original, but smaller. So you can continue this process, picking half of each category each time. Once all of your categories are just a single slip, you're done!

This is optimal because:

Consider the largest category that you don't know the order of. In order to solve the problem, you must get that size down to 1. And for any strategy, each turn, the size of this largest category will be halved at best. (If you don't cut it in half, then one piece will be larger than half the original size.)

So this strategy is optimal, since it always cuts each category in half.

Without restriction of only checking consecutive papers

I agree that Deusovi's answer is optimal. It is a similar approach to playing a number guessing game where you are told "higher" or "lower" when making a guess. The strategy is to divide the problem in half each time. Since you know which group each number is in after checking the sum, you can check halves of all current groups simultaneously.

The general solution for $n$ would be: 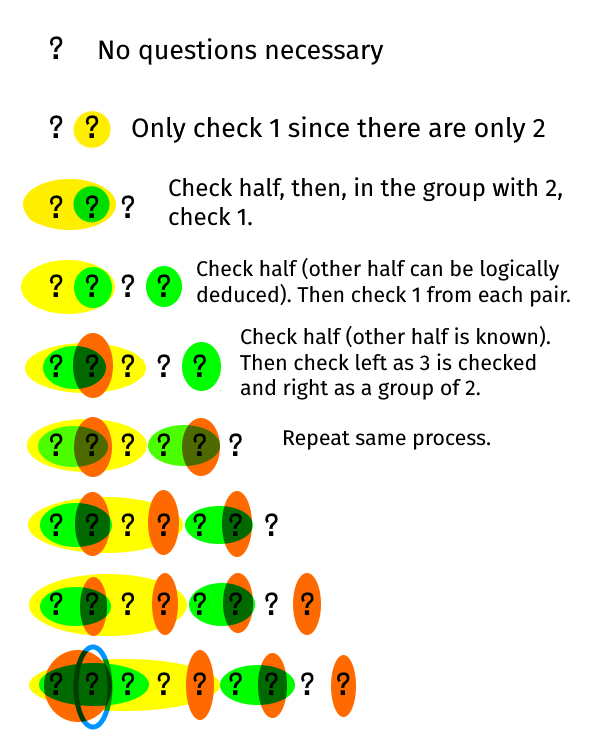 With condition of only checking consecutive papers

I believe this is the general equation for $n$:

For one paper, you already know the number so no questions necessary. For 2 papers, 1 question is necessary to differentiate the two.

With $3$ papers, write $1, 2, 4$. First, check the sum of the first 2 papers. By the binary representations having every digit unique, you know the 2 numbers on these papers (but not the order). Check the last 2 to know which paper is in the middle one and by deduction, you now know the first paper and last paper. 2 questions necessary.

With $4$ papers, write $1, 2, 4, 8$. First, check the sum of the first 2 papers. You now know the 2 numbers on these papers but not the order. Check the 2nd and 3rd to know which paper is in the second (and by deduction also the first and third). Since there is only 1 paper left, you know it must be the only remaining number. 2 questions necessary.

With $5$ papers, write $1, 2, 4, 8, 16$. First, check the sum of the first 2 papers. You now know the 2 numbers on these papers but not the order. Check the 2nd, 3rd, and 4th to know which paper is in the second (and by deduction also the first). Check the last 2 to know the fourth paper (and by deduction the third and fifth). 3 questions necessary.

With $6$ papers, write $1, 2, 4, 8, 16, 32$. First, check the sum of the first 2 papers. You now know the 2 numbers on these papers but not the order. Check the 2nd, 3rd, and 4th to know which paper is in the second (and by deduction also the first). Check the 4th and 5th papers to know the internal order of those and deduce the third. Since only one paper has remained unchecked, you know all 6 papers. 3 questions necessary.

As an example, say we have numbers 1, 2, 3. Then, we find the sum of the three numbers, which is six. Then, we take the numbers and lay them out in a row. Then, we ask the sum of two slips. Then, we ask for the sum of another two slips. The one with the greater sum has the biggest number in the group. The one with the smaller sum would have the smaller number in its group. Then, to know which one is the middle number, we take the value of both groups minus away six, and you get the middle number.

And this would continue on and on

9
Recover the Ripped Quote
19
Blackboard cleaning
18
Two prisoners and the prison ward
9
Puzzle similar to 15-puzzle but more moveable pieces?
2
How to improve "Universal dissection"?
14
A mini game with 15 pieces of paper
13
Folding a piece of paper with numbers in sequence
1
Rearranging the square