He hadn't been responding to emails for days. When he was deeply involved in his work, delays were not uncommon, but not this long. Something was clearly amiss. Something had happened to my long time friend and companion Hermes Pascalon. On my trip across town to his elaborate and eccentric workhouse, a mish-mash of an alchemist's den and a productive hive of a bizarre scientist, I tried to recount our recent conversations relating to his latest endeavours. There was something about Flamel - that's a name I was familiar with, but Hermes was certainly not a fan of what he called 'popular trash fiction'. Apparently credit for Flamel's secrets came from elsewhere, but I think I'd been gazing out the window at that part of the conversation. But I do recall something about a Magnum Opus - what was that? Had he been working on a new recipe for a really good ice cream or something? Surely not.

I pushed open the large oak double doors that led into his work space. Dimly lit and cluttered with unfamiliar glassware and experimental contraptions, the room was a museum of periodic tables and astrological symbology. My search for Hermes was fruitless. However, in one disused corner of the room was a wall with a bookcase heaving heavily with ancient tomes and leather bound scripts that were covered in dust, just like the floor around it. But something wasn't quite right. The footprints on the dusty floor pressed right up to the bookcase. Nobody could stand that close to the shelves; there had to be something else. Of course! A hidden door. But how to open it?

On closer inspection, not all the books were covered in dust. One showed signs of being frequently handled. "16th Century Medicinal uses of Mercury". Mmm. Light reading. I pulled the tome off the shelf only to reveal an electronic keypad with numbers 0-9 fixed to the wall behind. And inside the front sleeve of the book was a sheet of paper in Hermes' handwriting. Surely this would provide an insight to the code needed for the keypad. Ah, yes, simple. I entered the correct code and the bookcase quietly and effortlessly slid open to reveal a dark passage leading downwards towards who knew what. Hopefully Hermes.

What was the code I needed to enter the inner sanctum of the alchemist? 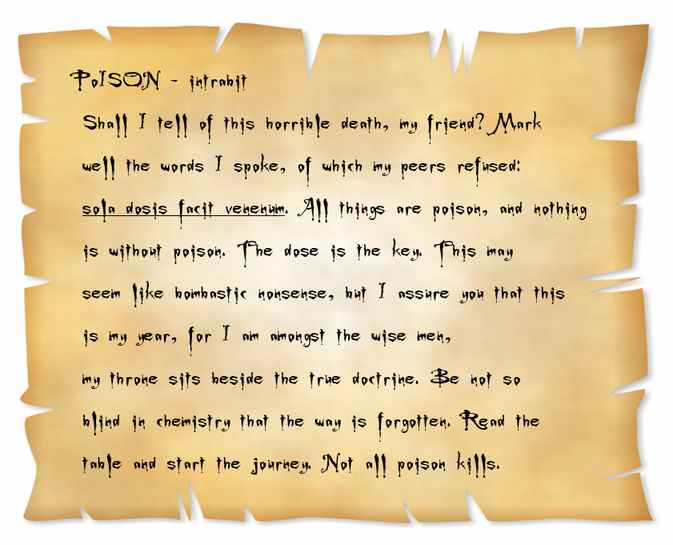 Hermes always did have terrible handwriting. Thankfully, I jot down my own transcription of his words into my own notebook, which makes things much easier to read.

When enterpreted correctly, the text will tell you exactly what bit of information you need to unlock the keypad.

PoISON tells you which words of the text are important.

The letters in PoISON tell you to take the 84th, 53rd, 16th, 8th, and 7th words from the memo - based on the atomic numbers of the elements with those symbols (suggested by the memo words "be not so blind in chemistry" and "read the table"). These words, put together, give 'the year of my death'. (You need to start counting after the word 'intrabit'.)

The memo itself is written from the point of view of the 16th century doctor and alchemist Paracelsus, as evidenced by, among other things, the phrase "this may seem like bombastic nonsense", with Bombastus being part of Paracelsus' real name, and "beside the true doctrine", with 'beside' suggesting 'para', and 'true doctrine' suggesting Celsus (a historical person known by that name who wrote of the 'true doctrine'). Paracelsus died in 1541.

My previous guesses are summarized here:

Third attempt: 15. I am now interpreting the chemistry-related "table" in the message not as the periodic table, but a table of median lethal doses. The hint mentions that we are looking for a "bit" of information. At the start of the message, the word "intrabit" appears. This is Latin, and means something along the lines of "enter into", but it also includes the letters "bit". Interpreting this as "the entrance bit" of PoISON, treating these as a collection of elements, as suggested by @Jens, gives us polonium. Looking for the median lethal dose of polonium I found, on Wikipedia, a medium lethal dose of polonium-210 estimated at 15 MBq (megabecquerels).
Second attempt: 1538. The "Sola dosis facit venenum" quote attributed to Paracelsus is based on his writings which date to 1538. Again, Hermes' letter seems to be written from Paracelsus' point of view, and mentions that "this is my year".
First attempt: 1531. The "Sola dosis facit venenum" quote is attributed to Paracelsus. The letter Hermes wrote seems to be written from the point of view of Paracelsus, as evidenced by, among other things, the phrase "this may seem like bombastic nonsense", with Bombastus being part of Paracelsus' real name. In the letter, the author mentions that "this is my year". 1531 is a notable year in Paracelsus' life, as that is when he completed his "work beyond wonder": Opus Paramirum.

My second guess for the code is

The way the word PoISON is capitalized seems a reference to the chemical symbols Po, I, S, O, N which have the atomic numbers 84, 53, 16, 8 and 7. In addition, the message includes the words Chemistry and table, i.e. the Periodic Table.

A comment from OP suggests the code can be found as

a combination of my original answer and that of Lanny Strack, who arrived at 1538.

To me, the vital clue is the sentence

The dose is the key.

So what dose is common to all poisons?

Not the answer you're looking for? Browse other questions tagged knowledge enigmatic-puzzle story or ask your own question.

6
The Alchemist leaves a trail

167
Merlin and Hermes: Mysterious Lines
16
The Pie-Maker's Son
3
The desperate student
8
A Letter: Moriarty is dead
9
A Puzzle With a Missing Tag
91
Do I Work with an Orangutan?
11
Mr. Mouse Goes Shopping
7
Who killed Professor Thomas Eyebright, and why?
10
On Doors and Passcodes, or Flying High
6
The Alchemist leaves a trail