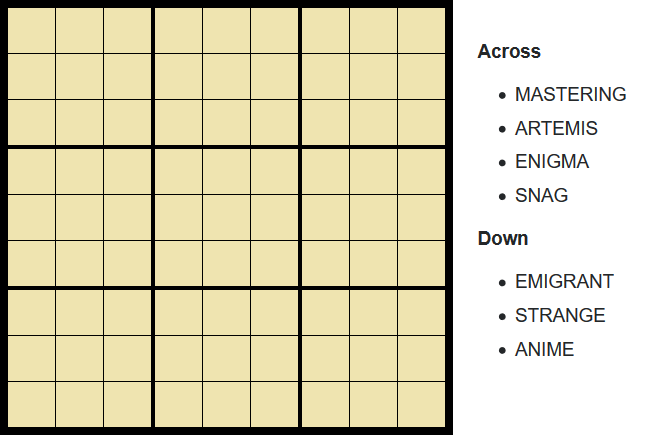 Additionally, the words on the right-hand side must appear in the given orientation (across/down). Each word must be contiguous (e.g. SNEAG doesn't count as SNAG). Words may intersect.

Generating this puzzle was computer-aided but I solved it by hand before posting. 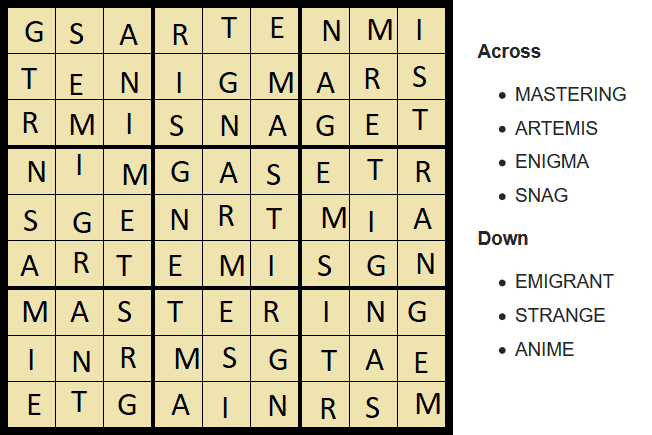 Firstly, note that MASTERING is a full nine-letter word so it takes up a whole row, and EMIGRANT is an eight-letter word so the column is either EMIGRANTS or SEMIGRANT. Also note that ARTEMIS must begin from either the 1st or 3rd place in its row, because otherwise the A will clash with MASTERING; and the remaining letters in that row will be N and G.

If the long words MASTERING and EMIGRANT do not intersect, then there are only two possibilities:

So the long words MASTERING and EMIGRANT must intersect, and there are sixteen ways that can happen.

One/two, three, four, five/six, seven/eight, nine, ten, eleven lead to just one possibility for ARTEMIS and then a quick contradiction. 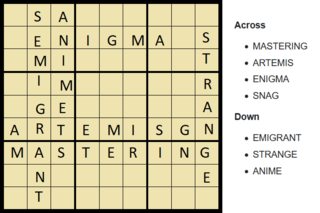 After some more pure Sudoku-ish deductions, we get to here: 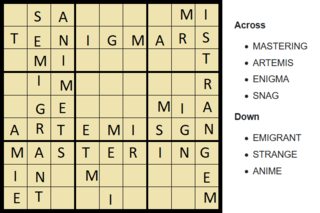 Now SNAG can only be in the third row, 4th to 7th places.

And some more purely Sudoku-ish deductions lead to the final answer:

Not the answer you're looking for? Browse other questions tagged logical-deduction word no-computers grid-deduction sudoku or ask your own question.

8
Skeleton sudoku, the second
15
Tetromino Sudoku
17
HAISU with a twist
7
Toroidal Heyacrazy: Rainstorm
11
Mosaic by Albrecht Dürer
19
Tic tac toe - Sudoku: A variation in which the centre box defines the layout of the other boxes
14
(Indonesian) Fill-In Puzzle
6
When you give a cat a crossword
15
Letter Scrabble - Indonesia's Independence Day Special