What do you call this Twisty puzzle? 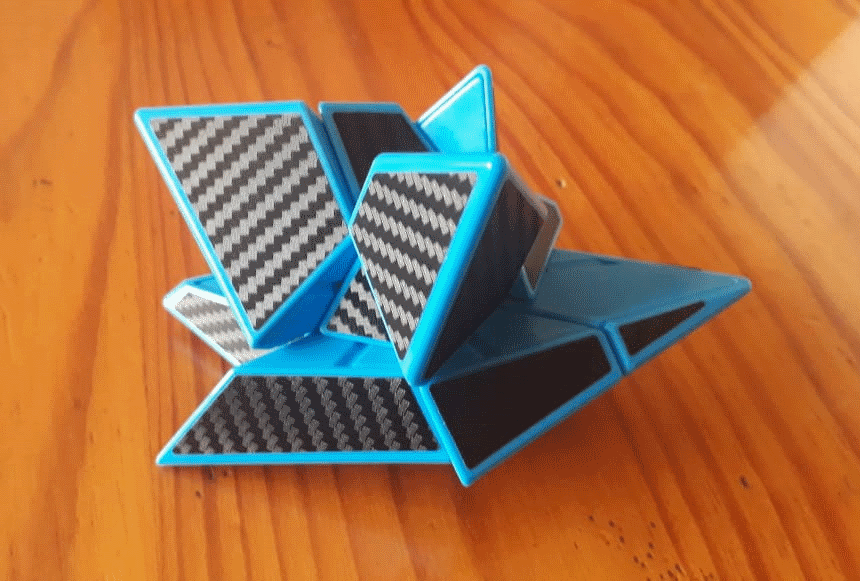 I opened it; then mixed it up and then threw away the box...

I'm trying to find help online on how to solve it, but I have no idea how / where to start.

Any help / links / tips will be appreciated.

It's not a ghost cube, it's a Ghost Pyraminx. The solve should be quite similar to a Pyraminx, but in fact it's a shapemod of a Halpern-Maier Tetrahedron (also known as Jing's Pyraminx), since it includes the face centres and lacks the trivial tips found on the Pyraminx. It could also be seen as a shape mod of a Skewb.

To solve it, I would probably look up tutorials on how to solve the Skewb, or rather the Skewb Ultimate, since unlike a Skewb you will also have to orient the square 'faces'. Just note that on your puzzle, some of the pieces are triangular, meaning that they have three other pieces next to them, while some are square, having four pieces next to them. Those are the 'corners' and 'faces' of the underlying Skewb puzzle. But you should also look up how ghost puzzles work (the Ghost Cube being the most common), since the shape is designed to be especially confusing.

You can also find Ghost Pyraminx tutorials online directly, such as this one on youtube. (I haven't watched it, so can't vouch for it.)

This seems to be a Ghost cube puzzle.

While the other answers have correctly noted that it is a "ghost" variant of a twisty puzzle, in that all its pieces have a different shape, this one is not based on a 3x3x3 or 2x2x2 Rubik's Cube but on a Skewb mechanism. It's final shape is not a cube however, but a tetrahedron (pyramid).

It is sold under the name "Ghost Pyraminx Cube".
Twisty puzzles museum entry

Not the answer you're looking for? Browse other questions tagged twisty-puzzles or ask your own question.

10
How do I solve the C4Y 3x3x7?
7
How can I solve the Gear Cube Extreme?
7
How do I rotate edges on the Geared Mixup puzzle?
16
What is the name (and brand / year) of this puzzle?
7
Engel's Enigma Optimals
17
Single solved state for Sudoku Pyraminx
1
Non-reduction methods for solving the 4x4 Rubik's cube
5
A Twisty Puzzle my friend barely remembers